Roughly every two weeks Tennessee U.S. Senator Marsha Blackburn puts out her online and email newsletter, the Blackburn Report.  It has the usual array of public service and federal information links that any good congressional staff can produce.  Interspersed, however, are moments when Marsha lets her freak fly.  Politifact as of mid-May had a scorecard of ten Blackburn dubious assertions.  One checked out.  Three were rated half-true.  Three were mostly false; and three were rated entirely false.  Her already poor record may need to be updated following some newsletter fabrications.

The May 15th edition had this whopper: “The Russian-collusion conspiracy theory has finally been discredited – but remember, somebody high up in the Obama administration cooked up the plot and gave the order to illegally spy on President Trump’s campaign.”  Nope, Marsha.  Not even close.  A bipartisan report from the Senate Intelligence Committee affirmed the conclusion of U.S. intelligence agencies that Russia engaged in a massive effort to tilt the 2016 election in Trump’s favor.  Despite Attorney General William Barr’s deceptions, the Mueller Report exhaustively documented that on behalf of Trump the “Russian government interfered in the 2016 presidential election in sweeping and systematic fashion.”

The May 8th edition was heavily into distracting from U. S. pandemic failures by the Trumpish strategy of blaming China.  “Our lives have been changed forever, and Americans victimized by the Chinese Communist Party deserve compensation for their suffering,” wrote Blackburn.  “We cannot let Communist China off the hook for spreading this disease.”  In the May 1st edition Blackburn bragged about her efforts “to empower Americans to sue China in US courts for wreaking this havoc on the world.”  There will be plenty of time to review failures around the globe, but Blackburn needs to start closer to home, say, 1600 Pennsylvania Avenue.

Politifact as of mid-May had a scorecard of ten Blackburn dubious assertions. Three were mostly false; and three were rated entirely false.

We also had an ironic moment in the May 1st edition when Blackburn reminded, just before press reports of the Trump initially shelving strong CDC advice, “we must continue to follow the CDC’s guidelines.”  In that same edition Blackburn returned to debunked Obamagate nonsense.  “We know the FBI broke the rules to spy on General Michael Flynn. If they were willing to cross the line once, you can bet they’ll be willing to do it again. We need justice and accountability for such constitutional violations.”

The radical right has been flogging this foggy notion that the Obama Administration spied on Trump’s campaign. They misrepresent the routine practice of internally “unmasking” Americans caught on legal intercepts of foreign spy phone calls–when the national security threats were so startling that some agencies needed to know who was involved.  In several cases it was Trump devotee turned National Security Adviser turned defendant pleading guilty to lying to the FBI, Michael Flynn.  If Trumpers do not want to be revealed for surreptitious contacts with foreign spies, perhaps they shouldn’t have secret chats with foreign spies.

The April 20th edition featured an incredible string of whoppers.  Blackburn wrote, “Since the day COVID-19 reached our shores, President Trump’s resolve to defeat it has not wavered. His administration has worked day and night to identify the most effective ways to keep the American people safe, from supplying health care workers with needed equipment to aiding small business owners through a volatile economic period.”

Let’s remember Trump in 2018 disbanded and reassigned members from a National Security Council pandemic unit.  He largely ignored the pandemic response playbook left to him from the Obama Administration.  Trump in January repeatedly ignored Presidential Daily Brief and other warnings about the forthcoming COVID-19 pandemic.  The U.S. and South Korea both reported their first official COVID case on January 20th.  South Korea quickly engaged in a regimen of testing and tracing that effectively blunted disease spread.  The U.S. only now, months later, has some expanded testing.  Our infection numbers and death tally make us the global hotspot.

Trump’s denial left states driving up prices for the shrinking supplies of protective equipment.  Trump’s inaction in February now is called Blank History Month.  He acted late to invoke the Defense Production Act regarding ventilators, and mostly has used the act to keep open meat processing plants that have become vectors for spreading the pandemic to employees, their families, and their communities.  Trump reassigned the top virologist at the Biomedical Advanced Research and Development Authority; that man became a whistleblower to the Administration’s toxic combination of venality and incompetence.  Trump also famously has invoked wishful thinking on the end of the pandemic and the pace of vaccine research, lied about testing availability, and advocated crazy “solutions” like heart-dangerous doses of a malarial drug and internal use of disinfectants.

Marsha Blackburn has more than four years left in her term, but these are not the kind of outrages voters can or should forget. 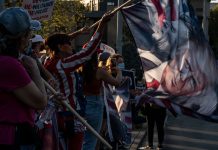 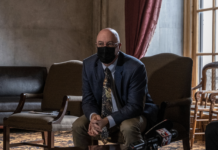 Commentary: Knox County Board of Health endangered by viral nonsense

Commentary: How Gloria Johnson’s Hallway Desk Came to Be