My memories of the year are few, but powerful, as they are some of the earliest ones I have.

I turned four that year, and that may have been the year I got a pink birthday cake but I only know that from old photos. I don’t need photos to remember the day our next door neighbor’s daughter found out her husband had been killed in combat in Vietnam: The sounds from next door can only be described as keening, a wailing that suffused the neighborhood.

After that, I remember seeing people fighting in the streets of other cities. I watched a little on our black and white TV and mom told me people were upset because a famous man had been killed. Two months later, another famous man was killed: I asked mom why all the flags had been pulled only halfway up the staff.

More than once over the last few years, I’ve asked my husband, old enough to remember 1968 clearly: “Is this as bad as ‘68?” His response is usually: “Well, no one famous has been assassinated yet.”

1968 was a year of upheaval and violence. It was the year of the Tet Offensive, which played a vital role in weakening public support for the war in Vietnam. It was the year of riots in Chicago during the Democratic National Convention, when police clubbed and tear-gassed protestors.

When white supremacists and neo-Nazis held the “Unite the Right” rally in Charlottesville, Va. in 2017, complete with fights and images of a car plowing through a crowd of counter-demonstrators, I thought of 1968.

When, after posting anti-Semitic comments on social media, a man attacked the Tree of Life synagogue in Pittsburgh and killed 11 congregants, I thought of 1968.

More than once over the last few years, I’ve asked my husband, old enough to remember 1968 clearly: “Is this as bad as ‘68?” His response is usually: “Well, no one famous has been assassinated yet.”

No, no one famous has been assassinated yet. But in what’s become a familiar scene the last few years, video has emerged of two black men being killed in public. First, in Georgia, Ahmaud Arbery was followed and shot in the middle of the street in broad daylight while he was out for a run. Americans were still processing that when George Floyd was killed in Minnesota Monday night. Tuesday morning, horrifying video of a Minneapolis cop kneeling on Floyd’s neck for close to nine minutes went public. Floyd begged for mercy, using the same words – “I can’t breathe” – Eric Garner said when he died at the hands of New York police in 2014.

I think of 1968 when I look at pictures of the fiery riots in Minnesota this week, protesting Floyd’s death.

Since February, more Americans have died from COVID-19 than were killed during our 20 years of conflict in Vietnam.  We have a president who refuses to wear a mask to protect against the spread of germs, igniting partisan warfare over a virus that doesn’t know politics.

And, like 1968, this is an election year. At this point, national conventions are scheduled but who knows if they will take place and if they do, we don’t know what they will look like. If ever there’s a year for protesting political systems, this is the one.

More than 50 years have passed since 1968. Technology has progressed immensely and when we are feeling good about ourselves as Americans, we like to think we’ve become much more tolerant and accepting. But too much remains unchanged and to use the French expression, plus ça change, plus c’est la même chose: The more things change, the more it stays the same.

So no, there have been no assassinations of famous people yet. 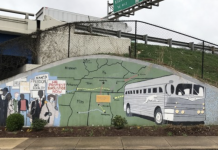 Commentary: Islamaphobia in Tennessee is nothing new