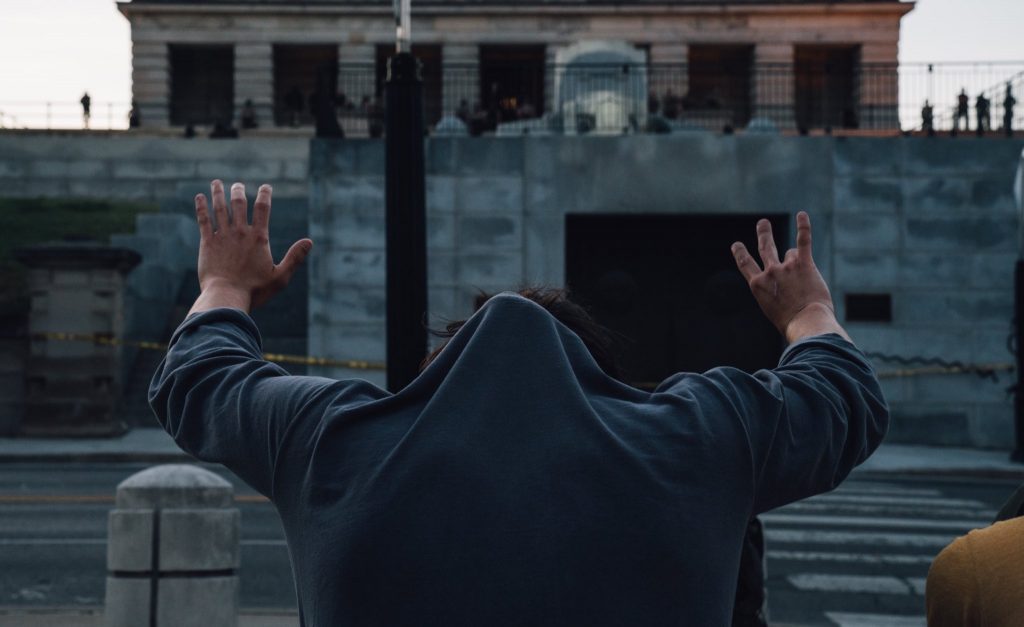 Nashville, Tenn., May 31 – A demonstrator kneels in front of the capitol and holds up eight fingers to signify the amount of time Minneapolis police officer Derek Chauvin kneeled on George Floyd’s neck. (Photo: Alex Kent) 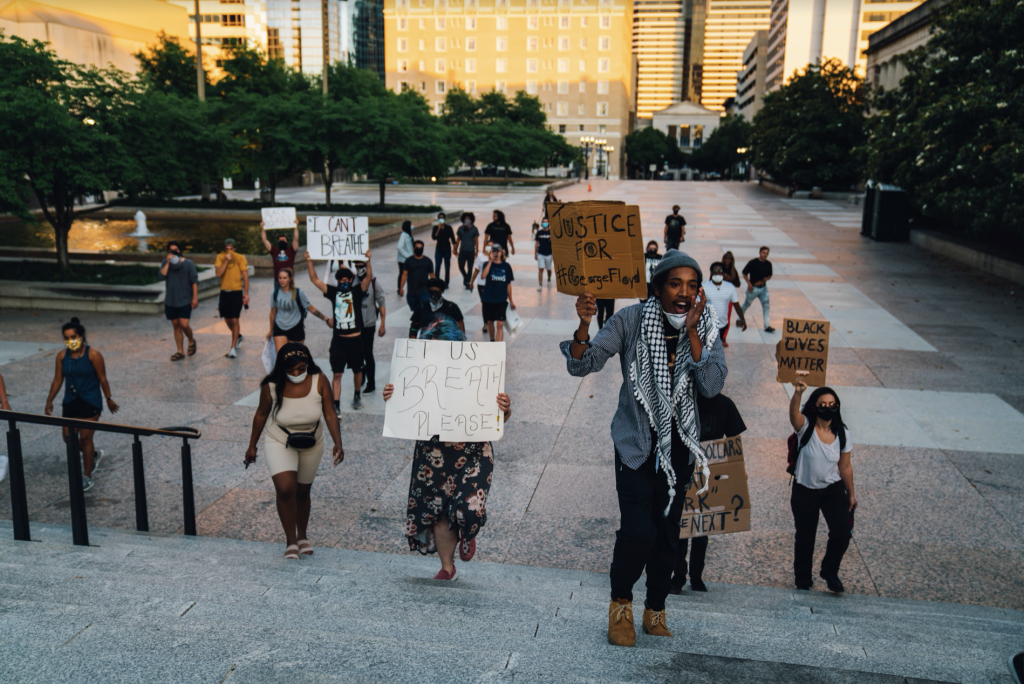 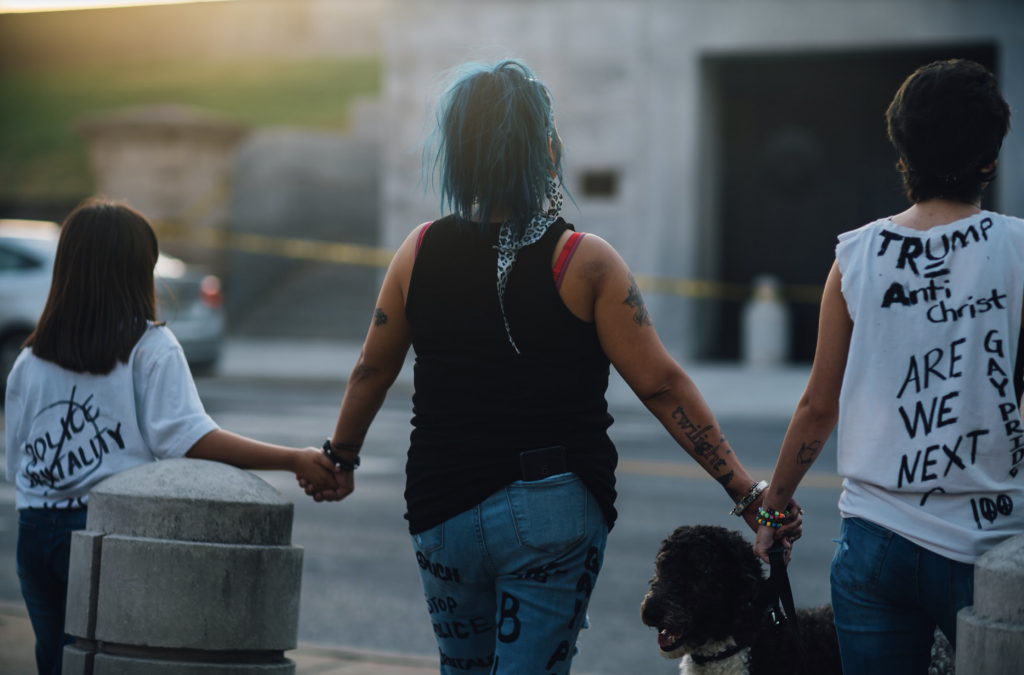 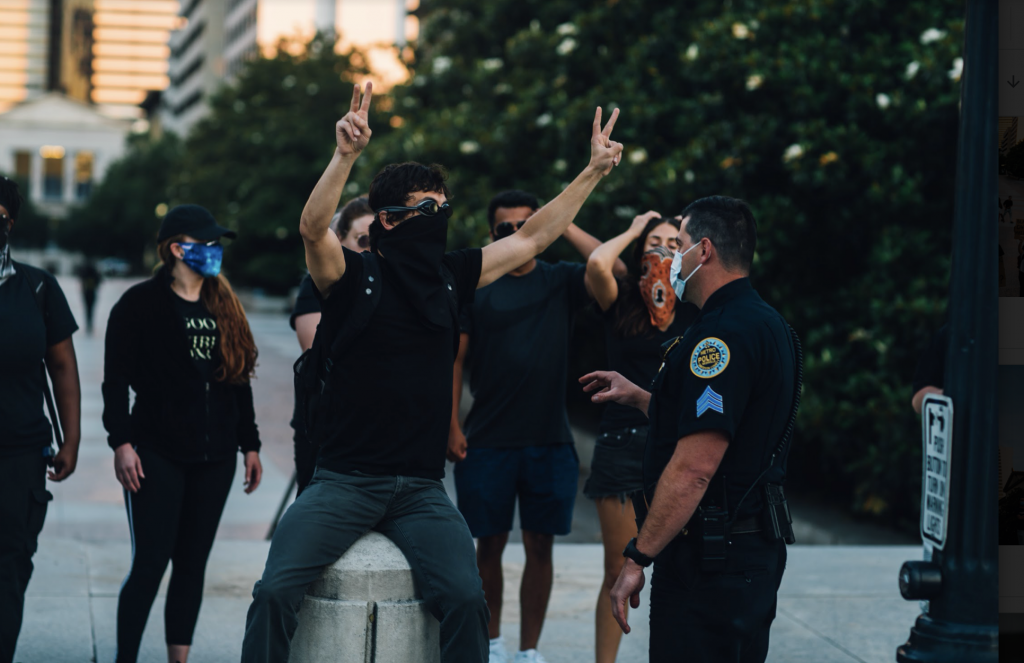 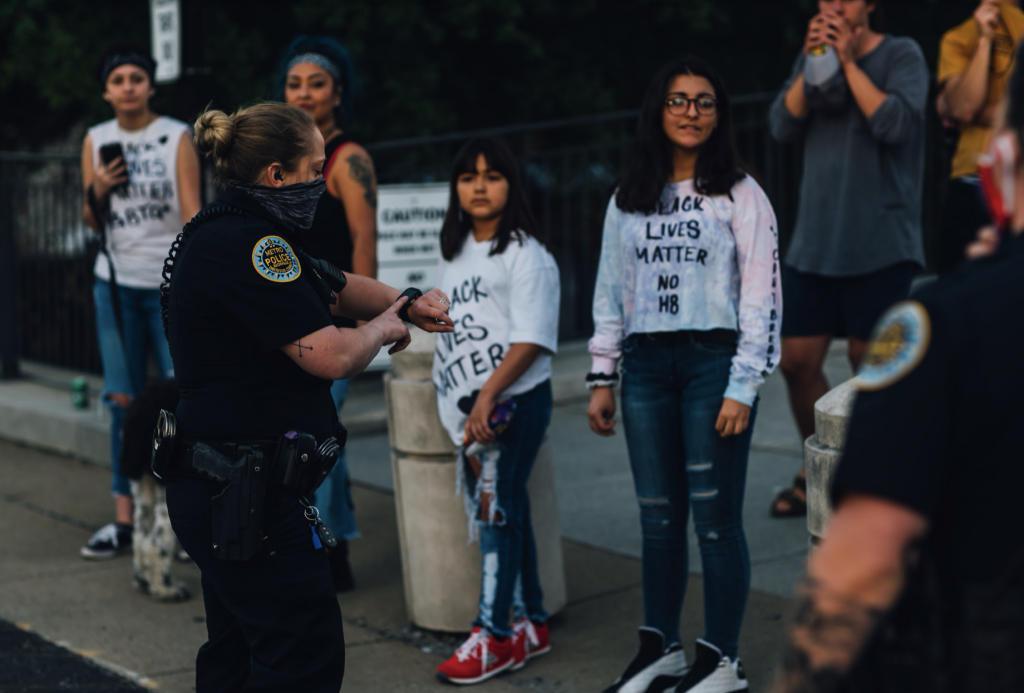 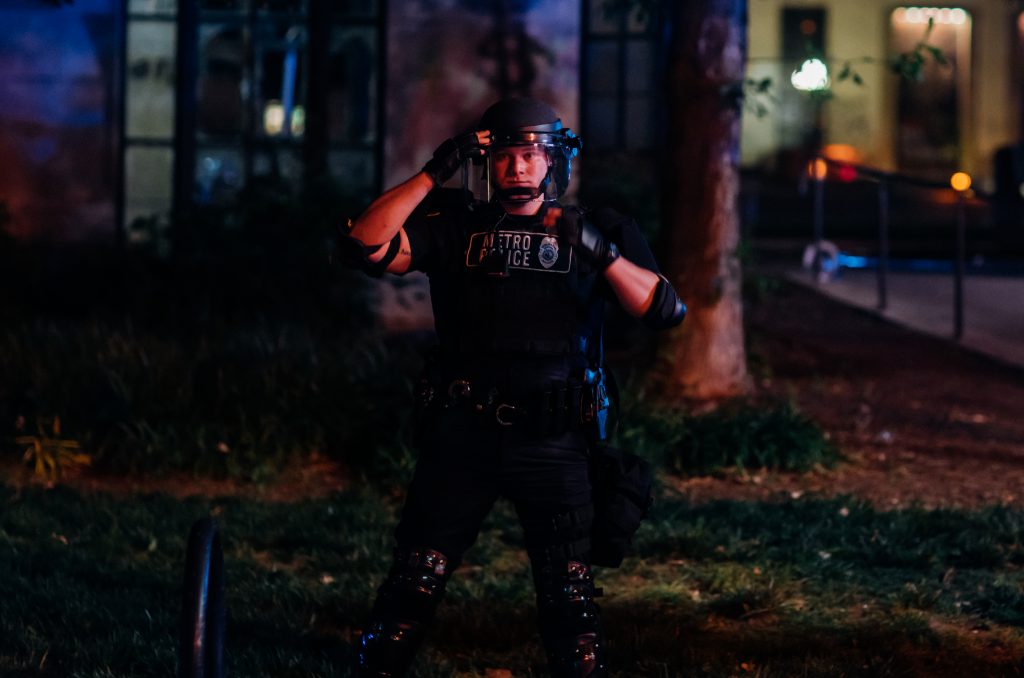 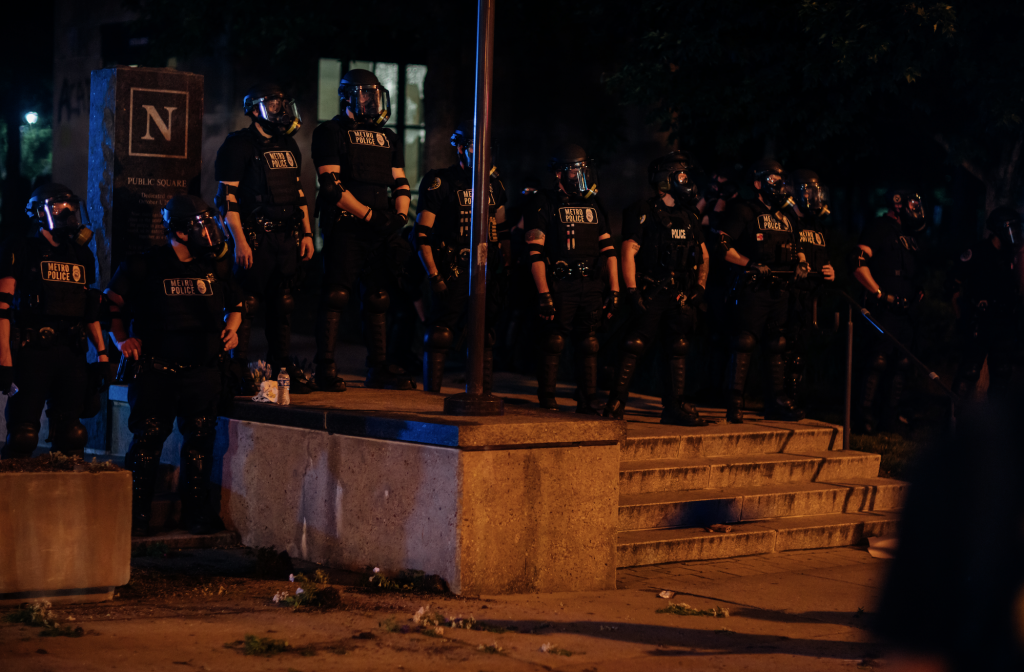 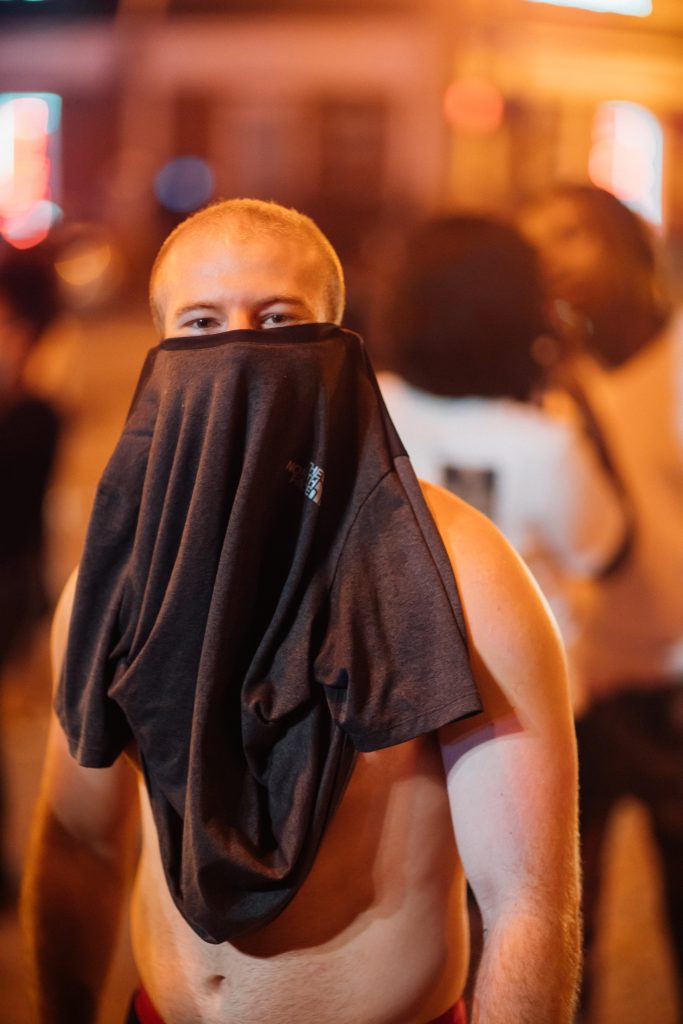 Nashville, Tenn., May 30- A man uses his t-shirt as a makeshift face mask during protests. (Photo: Alex Kent) 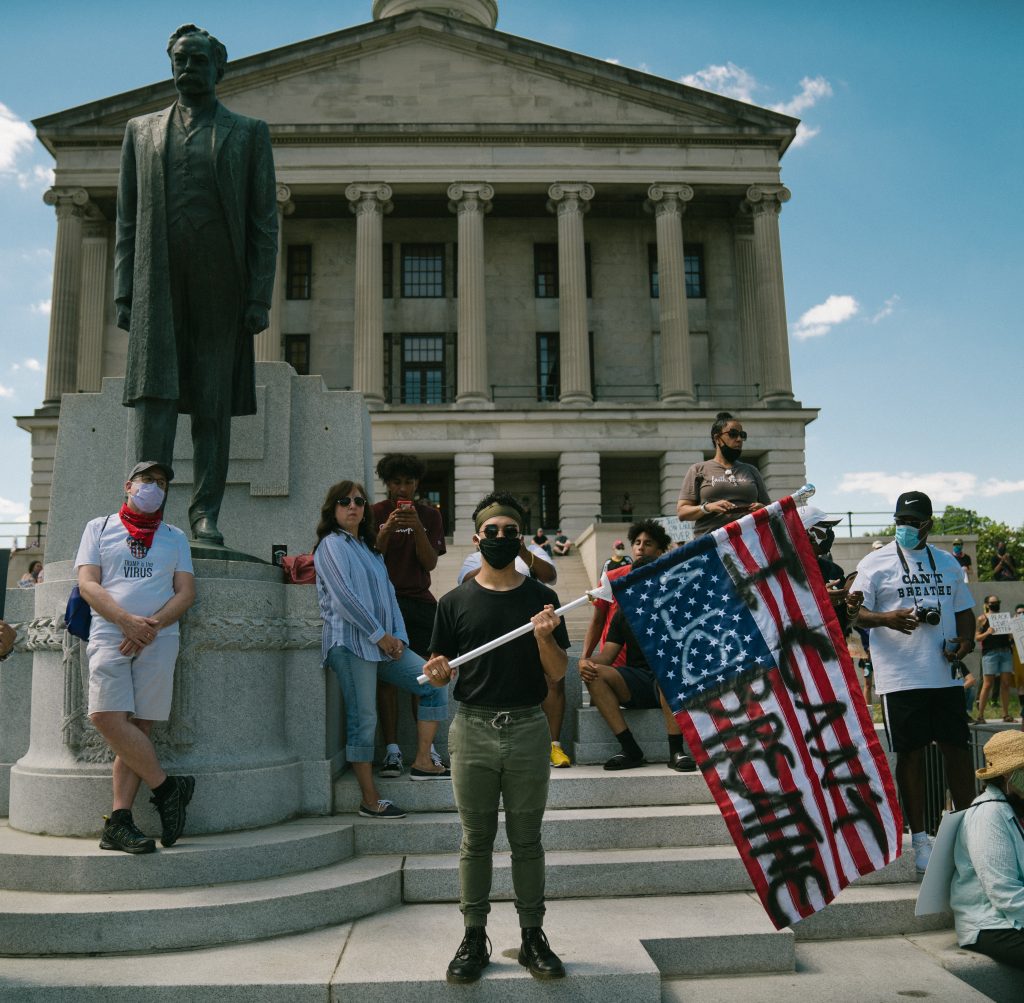 Nashville, Tenn., May 30 – Protesters stand in front of the Tennessee State Capitol and the statue of former U.S. Sen. Edward Carmack. Members of the crowd tore the Carmack statue down later in the day. (Photo: Alex Kent)

Peaceful protests over the weekend in Tennessee cities, including Nashville, Knoxville, Memphis, Chattanooga and Murfreesboro turned violent in several instances, with police dispersing tear gas and pepper spray to disperse the crowds and public and private property suffering damage.

The Knoxville event remained calm, while both Memphis and Nashville had peaceful organized protests that devolved after dark into violence. In Nashville, leaders of The Equity Alliance, an advocacy group that was a key organizer of the “I Will Breathe” rally, issued a state Saturday night clarifying that the rioting that characterized the later event was not connected to the afternoon rally.

Historic Metro Nashville City Hall was set on fire and portions of the crowd moved down the Second Avenue and Broadway tourist district, breaking windows and stealing from stores before police enforced the 10 p.m. curfew set by Mayor John Cooper.

As of Sunday night, the Metro Nashville Police Department reported 28 arrests of individuals.

A spokesman for the city of Chattanooga said police there arrested 11 people, six of whom were not from the city. Two vehicles were set on fire and several downtown businesses sustained minor damage. Sunday night at a second demonstration, protesters converged on Mayor Andy Berke’s house, where, according to the Chattanooga Times-Free Press, they drew chalk outlines of bodies on the pavement outside his house with the words, “I can’t breathe.” Hamilton County Sheriff’s deputies deployed tear gas in downtown Chattanooga when several protestors tore light poles down.

The Memphis protest turned about 10:45 when, according to the Memphis Commercial Appeal, a protestor jumped on a police car. For more than an hour, protestors and cops faced off against barricades in downtown Memphis. Police arrested several individuals.

In Murfreesboro Sunday, police dispensed tear gas and stun grenades, known as “flash bangs,” into a crowd of protestors.

Cooper and Murfreesboro Mayor Shane McFarland have both declared states of emergency in their respective cities, and Saturday, Gov. Bill Lee authorized use of the Tennessee National Guard in Nashville.

Biden’s State of the Union address by States Newsroom March 1, 2022
Settled into new homes, refugees in US say they are working… by Dulce Torres Guzman June 20, 2021
Tennessee's anti-LGBTQ bills supported by national… by Abby Lee Hood May 20, 2021