Evensville, Tenn. – In April, nearly 200 migrant workers came to Rhea County from Mexico to grow tomatoes, then in May they seemingly vanished.

With long, winding unpaved roads leading deep into untouched forest, Rhea County seems disconnected from the rest of Tennessee, and this seemingly innocuous fact is reinforced when some of their population disappeared from public view without much attention.

Their disappearance was only noticed when COVID-19 numbers in Rhea County jumped from 13 to 200 cases total mid-May in a county with slightly more than 33,000 citizens.

It started when an employee was feeling ill, so management sent him to be tested. When results came back positive for COVID-19, the farm requested the Rhea County Health Department test the rest of the workers, and that’s how Southern Valley – Henderson Farms found out every one of their employees tested positive for coronavirus, according to the Chattanooga Times Free Press.

No one has heard from or seen the newly arrived migrant workers since. They haven’t stopped by Mi Cabañita tienda for some Conchas, or other Mexican antojitos. They haven’t visited friends at Hernandez Mexican Restaurant for a delicious burrito al pastor, despite only being ten minutes away. No one has seen or heard from the migrant workers since reports that 187 were infected at the nearby Henderson Farms. The employees reported seeing only the farm managers dining at the restaurant with family, or stopping by the tienda to send money orders to the migrant worker’s families. They declined to give their names, fearing backlash against their businesses.

But the laborers have been sighted still working at Henderson Farms, despite reports of infection.  On a recent visit, about 30 laborers concentrated in the fields. Some wore scraps of fabric to cover their faces or nothing at all. Information in Spanish and English about workers rights covered the walls of school buses filled with bags and clothing.

Reporters for the Tennessee Lookout approached the laborers as they plowed the land in preparation for the growing season, but they kept their distance and were fearful to talk to outsiders, even to answer questions about what crops are being grown on the farm.

The boss will get mad, said one worker, if they stop working to talk to outsiders. He declined to give his name.

In a few minutes, three members of farm management pulled up wearing N95 masks.  They threatened to call local law enforcement, saying Lookout reporters were trespassing, despite no visible signage indicating this statement and an immediate offer to leave.

Migrant workers have become another casualty of the pandemic, with ballooning illness among the migrants a problem waiting to happen, according to Caitlin Berberich from Southern Migrant Legal Services.

“We were afraid this would happen,” she said.

The agricultural business stands as a symbol of irony in the current political climate. The Trump administration closed borders, expanded the use of detention, limited access to asylum and halted immigration from Mexico through enhanced enforcement.

Yet when the pandemic began in March and farm workers were designated as “essential workers,”  the Trump administration issued a series of orders granting agricultural employers additional flexibility in bringing in and employing H-2A temporary visa workers, as well as extending the visas.

An excerpt from the letter several farmworker rights groups sent to federal officials:

Tens of thousands of H-2A workers will soon be crossing over international borders, primarily from Mexico, in crowded, cramped busses, as they make their way to their various employers across the country.  Lacking personal transportation, once at their places of employment, H-2A workers and other farmworkers will be bussed to work, usually in groups, sometimes in old school busses, vans or pick up trucks. They will regularly be transported in groups into rural towns to buy groceries, cash checks, and send money to their families. If H-2A workers are in fact called upon to extend their stays and transfer to other jobs, they will likely be bussed or flown to other states. Travelling in groups raises serious health and safety risks both for the farmworkers being transported and the communities they join on their arrival. Workers from states or countries with low risk of COVID-19 may be transferred to states with high risk and vice versa. Moreover, a busload of 50 to 100 or so farmworkers all entering stores at busy times for local shoppers could drastically increase the likelihood of spreading COVID-19.

In Rhea County, the migrant workers arrived in April from Mexico in the middle of a pandemic to be housed in barracks-style rooms, where the workers are typically crowded together and have access to limited sanitary facilities.

“They often work in groups in the fields, touching equipment and packaging as well as crops, with limited access to handwashing facilities or sanitizer.  They depend on their employers for access to stores and health care, which is often limited in rural areas,” according  Bruce Goldstein, president of Farmworker Justice.

In these conditions, the spread of infection was almost inevitable and nothing has been done to protect farmworkers hired by H-2A program employers, the organization adds.

Farmworker Justice attempted to warn government officials of the impending danger. In conjunction with Southern Migrant Legal Services and similar organizations, the group penned a letter to Secretary of Labor Eugene Scalia and others on March 25 asking for enforcement of legal protections to H-2A workers especially since migrant workers were now considered critical, warning that “failure to take proactive steps now could be catastrophic, not just in terms of the human cost, but to the rural communities in which migrant farmworkers live, the fragile health care system, the entire multi-billion dollar agricultural business, and to everyone that it feeds.”

They depend on their employers for access to stores and health care, which is often limited in rural areas.   – Bruce Goldstein, president, Farmworker Justice.

Just a month later several farms in  Tennessee have experienced breakouts, including Monterey Mushroom in Loudon County with 74 employees testing positive. Employees were not allowed to return to work and were told to self-isolate, according to WBIR news in Knoxville.  These outbreaks have added to the higher rates of infection within Hispanic communities across the state, with Hispanic or Latinos making up 20% of the total confirmed cases.

The difference between Henderson Farms and Monterey Mushroom is that the latter have a home in the community.

Monterey Mushroom is a year-round business that employs many workers from the local, established Hispanic community. Migrant workers stay in the country for a limited time as a condition of  H2-A visas and have limited capability to make connections to the local Hispanic community due to barriers of transportation and communication. The workers depend almost entirely on their employer for every facet of their lives while working in a foreign country.

“What if your boss is also your landlord and can also deport you. They have your passport, they have everything,” said Frances Ansley,  professor emeritus at the University of Tennessee College of Law.

Members of the Tennessee Immigrant and Refugee Rights Coalition (TIRRC) have spoken out about the outbreaks and how “our local, state, and federal governments have not implemented any enforceable regulations for businesses that would protect workers and our communities,” said Stephanie Teatro, co-executive director.

Tennessee Lookout made several attempts to reach Southern Valley Fruit and Vegetables, Inc. for a comment with no success, and on the last attempt a representative who answered the phone at the business hung up. Southern Valleys website says it’s a family-owned farm in South Georgia, with farms in Georgia, Tennessee and Mexico’s Yucatan Peninsula.

TIRRC urges companies and government officials to follow farmworker outlines to protect the health of the farmworkers, the local community and the state’s food supply.

“Farmworkers are keeping communities healthy and fed. We must treat them as essential, not disposable,” said Teatro. 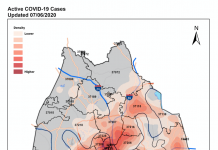 Tennessee’s contact tracing efforts under fire from right and left, but...