Nashville Mayor John Cooper acknowledged on Thursday that tourism-starved Music City wants to get its convention business up and running again, but said the city is not where it needs to be from a public health perspective right now to host the Republican Nashville Convention.

Gov. Bill Lee said earlier this week he has had discussions with Republican officials about holding the convention in Tennessee. Republican National Committee leaders are scheduled to tour Nashville this week. Tennessee Republicans ranging from Sen. Marsha Blackburn to Senate candidate Bill Hagerty have said they’d like to see the Volunteer State host the convention.

Republicans are looking for a new city to host the large gathering component of the convention because North Carolina Gov. Roy Cooper said Charlotte is not ready for such crowds. According to reports, other RNC business could still take place in Charlotte, but the components that draw huge crowds, such as President Donald Trump accepting the party’s nomination, may be held elsewhere.

Convention business is a significant part of Nashville’s tourism industry, which has been battered by a destructive tornado, the COVID-19 pandemic and ensuing recession. There’s also the political unrest in Nashville, which saw a peaceful protest on Saturday turn into a violent riot that led to a fire being started inside the historic Metro Courthouse and businesses in the city’s honky tonk district looted. 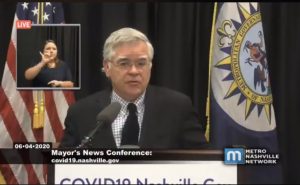 Asked his personal opinion about Nashville possibly hosting the RNC amid the political unrest and ongoing pandemic, here are Cooper’s full comments from his press briefing on Thursday:

“Of course we’re not surprised that anybody would want to be here, any national convention,” Cooper said. “And we look forward to the day when conventions routinely are back in Nashville. But there’s certainly no money available from us for hosting this event. But, certainly let’s look forward to another event that we are budgeted to help with and that is to support Belmont in the hosting of the presidential debate later this year.

“I do expect Nashville to be the site of a significant national political event already scheduled and already booked. And I do look forward to our convention business being reestablished. But, in the end… let’s just be clear, our current health protocols, which we have been very careful to establish and publicly support this. The whole country is hoping that they get to the phase where we can get back to business as normal. Of course, the specifics of your question, ‘Would current health protocols allow an indoor gathering of that size?’ Of course they wouldn’t.”

State Rep. Jay Reedy said Thursday during a House floor session advocating to bring the RNC here that he is ready for the “great unmasking of Tennesseans” in 2020. Many Republicans say bringing the convention to Nashville would stimulate the economy and help downtown.

It isn’t until stage four of the city’s reopening plan that large events will be allowed, but those will come with substantial social distancing guidelines that would make the hosting of a large convention logistically difficult if not impossible.

In addition to Cooper’s concerns, other Tennessee Democrats have said the city shouldn’t host the RNC. His brother, U.S. Rep. Jim Cooper, D-Nashville, expressed concerns about Nashville hosting the convention. An online petition opposing the RNC coming to Nashville had just under 17,000 signatures on Thursday morning.