Head of Meharry Medical College: ‘indifference’ no longer an option in response to ‘hate and COVID-19’

Meharry Medical College President and CEO Dr. James Hildreth drew the comparison on Thursday between how America has responded to police brutality of minorities and the COVID-19 pandemic disproportionately affecting people of color.

Hildreth made the remarks during Mayor John Cooper’s biweekly press conference about the pandemic. On Saturday a peaceful protest against police brutality in Nashville gave way to rioters who lit the Metro Courthouse on fire and looted some stores on lower Broadway.

Since then, Nashville has seen a series of peaceful protests and prayer vigils, culminating in a march of over 10,000 people organized by teenagers on Thursday. Meanwhile, the pandemic continues to hit the city hard with 5,900 cases and 70 deaths as of Friday. 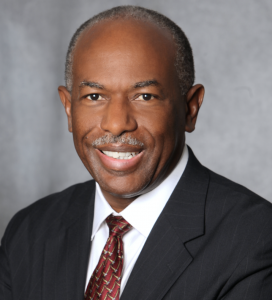 Hildreth, 63, was appointed by Mayor John Cooper to the city’s COVID-19 Task Force in March. He has served a president and CEO of Meharry Medical College since 2015. He is an internationally recognized expert in AIDS and HIV research, a field he has said he chose after witnessing the disease’s disproportionate image on poor people and communities of color. \

In 2002, Hildreth was named the first tenured African-American professor in basic sciences at Johns Hopkins University, where he earned his first medical degree. Hildreth grew up as the youngest of seven children in rural Arkansas.

“Good morning Nashville, several days ago in the midst of our fight against a deadly coronavirus, we all watched in absolute horror as a man named George Floyd, a black man, was murdered by a white police officer in Minneapolis, who with Mr. Floyd handcuffed, lying facedown on the ground placed his knee on Mr. Floyd’s neck for nine minutes, indifferent to Mr. Floyd’s repeated pleas for his life.

“This incident pulled the cover back on another ongoing fight in America, the fight against hate, and the fight to have the country live up to its creed of liberty and justice for all.

“Our fight against COVID-19 has lasted only four months. But in that time the virus has taken the lives of 107,000 of our fellow citizens. I would have imagined that this number – 100-plus-thousand people dead – would be so shocking, so jarring, so unacceptable that the fight against COVID-19 would have galvanized our nation a way that few things could. I find myself wondering whether the fact that most people who’ve died are black people, poor people, brown people and old people, does that explain the reason we have not been galvanized as a nation?

“I pray – fervently pray – that this is not the case. But all things considered, it’s hard to draw any other conclusion. Like that officer who murdered Mr. Floyd, our nation seems indifferent to the incredible toll that COVID-19 is having in some of our communities. The national fight against hate has been going on just a bit longer than the fight against the virus – 401 years to be exact. It has left countless African-Americans and indigenous people dead.

“As in the fight against COVID-19, indifference on the part of well-meaning people who feel the issue does not involve them has also been a significant challenge in the fight against hate. Like the virus, the hate and oppression that has been part of the lives of minorities for centuries is invisible to most people in this country. The murder of Mr. Floyd shined a bright light on that hate and made it visible to the country and the world. And the absolute cruelty and indifference of the act itself was such that for most human beings at a visceral level, indifference was no longer an option and their voices had to be heard.

“We need to continue to take steps to mitigate the virus’ spread while we take part in marches and rallies. We should wear masks, try to maintain difference with others and avoid bringing the virus home to the people we love by decontaminating our clothing and face-coverings before we have contact with them.

Like the virus, the hate and oppression that has been part of the lives of minorities for centuries is invisible to most people in the country.

“Nashville, we’ve actually done a really good job up to this point of controlling the spread of COVID-19. We flattened the curve. In fact we smashed the curve. Public and private organizations have collaborated in a really wonderful way. It’s kind of the envy of other cities. And many fewer people have died compared to other cities our size. These victories came about through weeks of mitigation, staying home, wearing face coverings, hand-washing and the like. And as noted, the large gatherings to protest against hate and give voice to our collective anger, display and pain are really important. But we must not let these gatherings set us back in our battle against COVID-19 especially given the fact the virus is disproportionately affecting the people who are the subject of the hate we are protesting.

“So by all means let us not go back. Let’s let our voices be heard, but in doing that that’s keep the virus in mind as well. So Nashville, as always, we’ve got this, and let us not doing things to become a vector for COVID-19.”

Head of Meharry Medical College: ‘indifference’ no longer an option in response to ‘hate and COVID-19’