Wanted: One contributor to write a single column for the Tennessee Lookout that justifies the presence of busts, statues or honorifics of Nathan Bedford Forrest.

Look: I am sick of hearing about Forrest. The debate over his bust in the Tennessee State Capitol – between those who want it gone and those who think it fine –  is eclipsing many other issues taking place in this truncated legislative session. There are so many other critical items affecting Tennesseans that need to be addressed, including health care and education. Those issues were already crucial before the COVID-19 pandemic and even more so now but what is everyone talking and writing about? A bearded dude who has been dead for over 140 years.

Undeniable facts about Forrest include that he was a cotton farmer, cattle trader and slave trader in Memphis before the Civil War, at which point he joined the Confederate Army and led a cavalry corps.  He was recognized as a strategic genius in battle and for more than a hundred years after his death, military leaders praised his acumen, writing dissertations on his skill.

Also undisputed is that troops under his command killed – massacred is usually the word used – Union troops, most of whom were Black, and who had already surrendered during the Battle of Ft. Pillow in Henning, Tenn. in 1864.

Forrest was the first Grand Wizard of the Ku Klux Klan, joining two years after it was founded in 1865.

Let’s move on to the items that have been disputed, to be thorough.

Forrest always said he was unaware of the killings at Ft. Pillow. Were that true, he is still to be held accountable given a leader is responsible for the actions of those under him.

You may hear that the early Klan was a “civic group” or a “veterans group.” I’ve read the Klan described as that on social media among those who defend keeping the Forrest bust as history.  But Forrest historian Andrew Ward, who wrote an account of the Ft. Pillow incident entitled “River Run Red”, says of the Klan: “In the spring of 1867, Forrest and his dragoons launched a campaign of midnight parades; ‘ghost’ masquerades; and ‘whipping’ and even ‘killing Negro voters and white Republicans, to scare blacks off voting and running for office.”

Now, you will also read that Forrest withdrew from the Klan after only a year or so as Grand Wizard and according to multiple historians, that appears to be correct. Reports on whether he ever fully repented for his lifetime of actions are mixed.

Wanted: One writer who can make a substantial case for the continued honoring of Nathan Bedford Forrest. I’m not holding my breath.

Which brings me back to my original point: Given all we know about him and even all that’s speculated, even assuming he made full apologies, why should he be honored?

The ‘what about-ers’ counter this with ‘next, you’ll want Andrew Jackson’s statue taken down.’

The Trail of Tears, the forced move of Cherokee Indians to western reservations by Jackson, ranks as one of the most disgraceful incidents in America’s history. But give Jackson this: He was one of only three U.S. Presidents from Tennessee. There’s an argument for his statue on state grounds.

I find no reason whatsoever for Forrest to be honored anywhere – for there to be parks named after him, statues honoring him and certainly no bust of him in the State Capitol. He was never elected to office. I find no record of anything he did to better the State of Tennessee.

And so, I’m legitimately asking for someone to write a column that makes a cogent and rational argument for any honorifics and for the attachment many of our Tennessee legislators apparently feel for Forres. The writer selected will not use phrases like “it’s our history”: That doesn’t tell me anything about Forrest’s qualifications to be recognized. Please explain what Forrest did in his life to assist or improve our state or bring honor to it.

We’ll publish it if someone produces that, but I’m not holding my breath waiting for it. 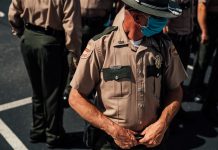 Commentary: The Limitations of Liberalism or How the Democrats Fumbled the...