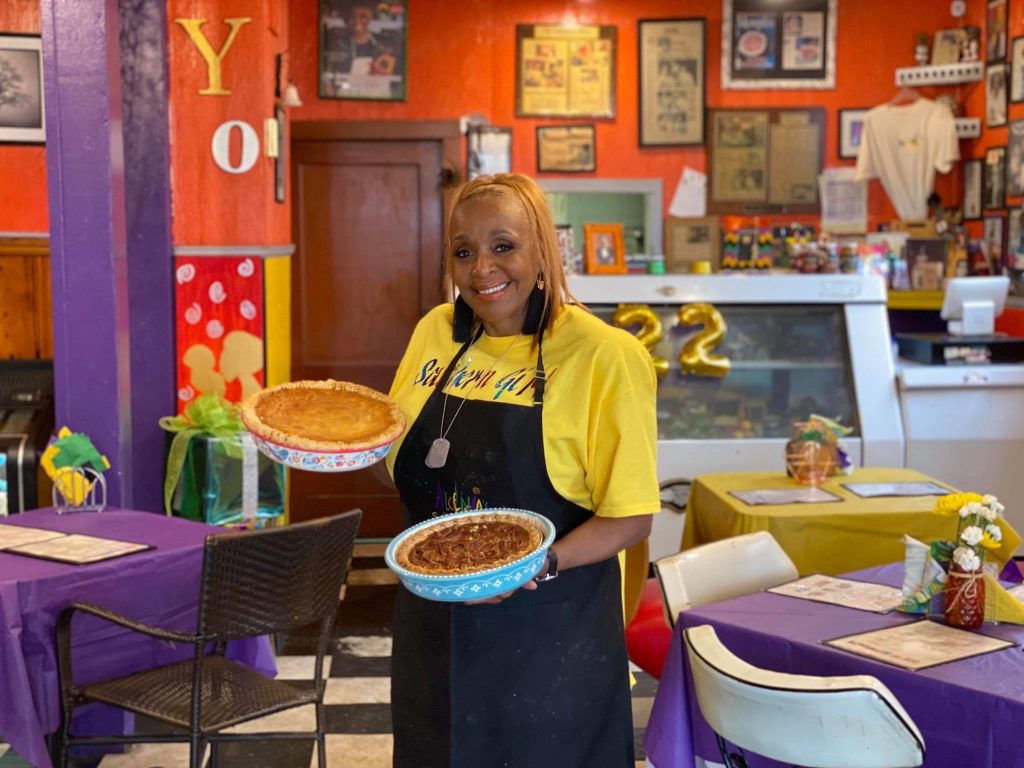 B. J. Chester-Tamayo, owner of Alcenia’s in Memphis, with a couple of the day’s homemade pies. (Photo: Anne Braly) 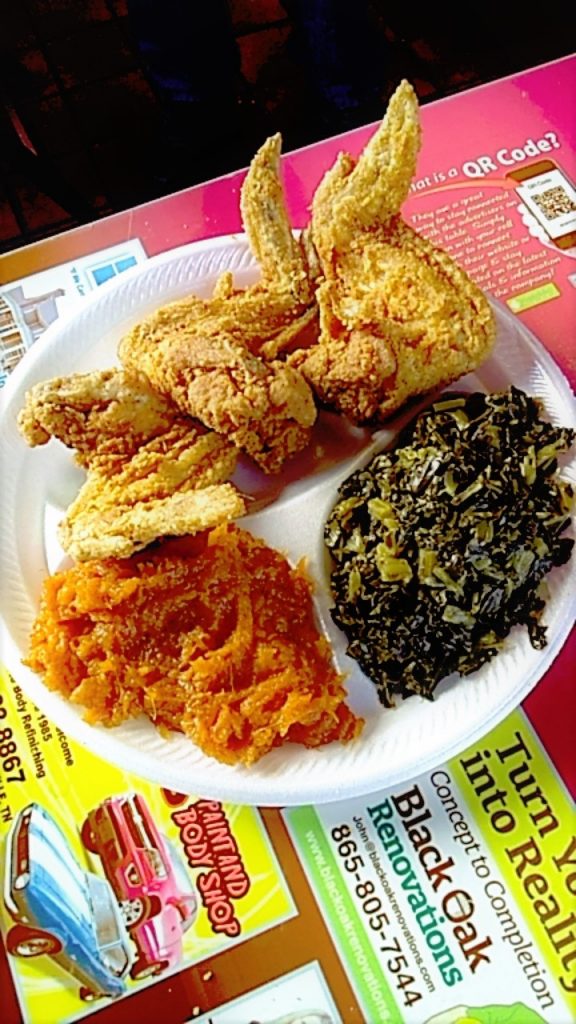 While wings are now one of the most-popular pieces of chicken, there was a time when they were once considered a lesser-cut of meat. Rather than throwing the wings away, they were given to slaves and are now on almost every soul food menu in the country. (Photo: Anne Braly) 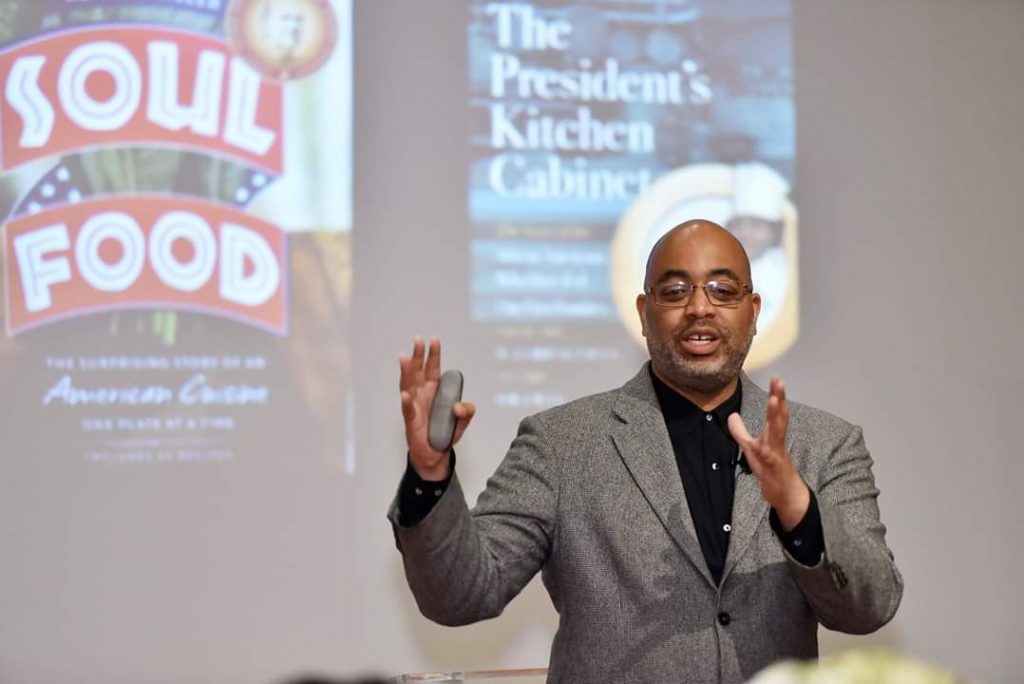 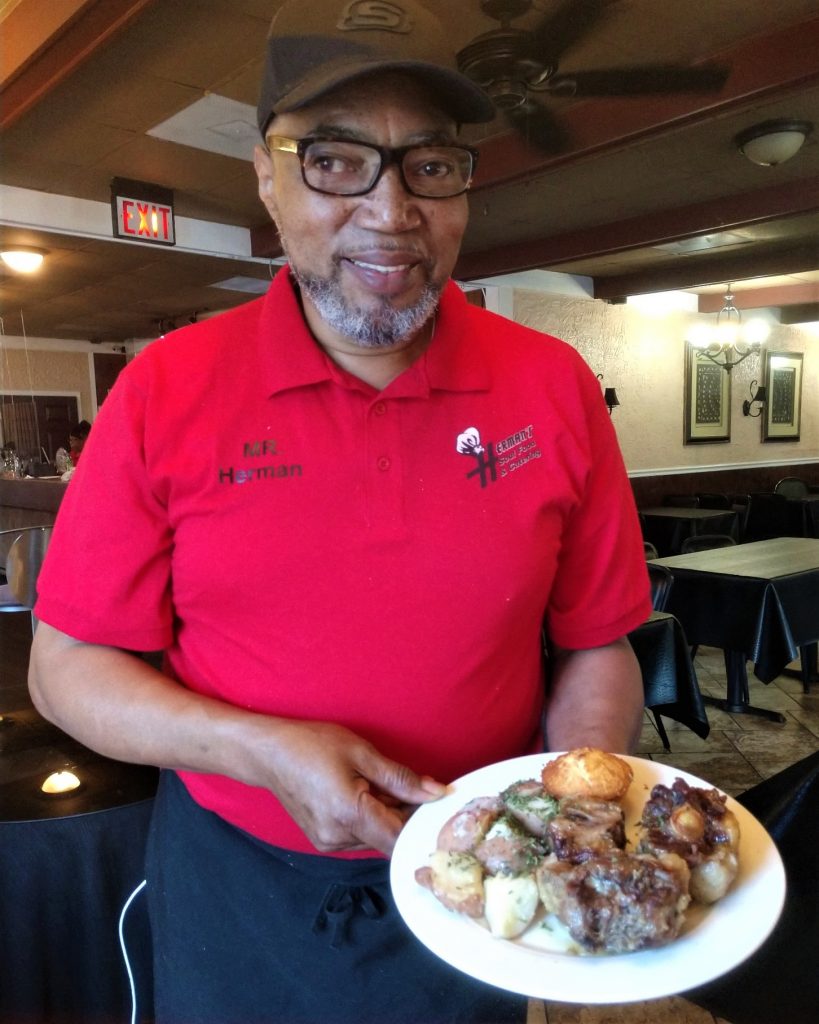 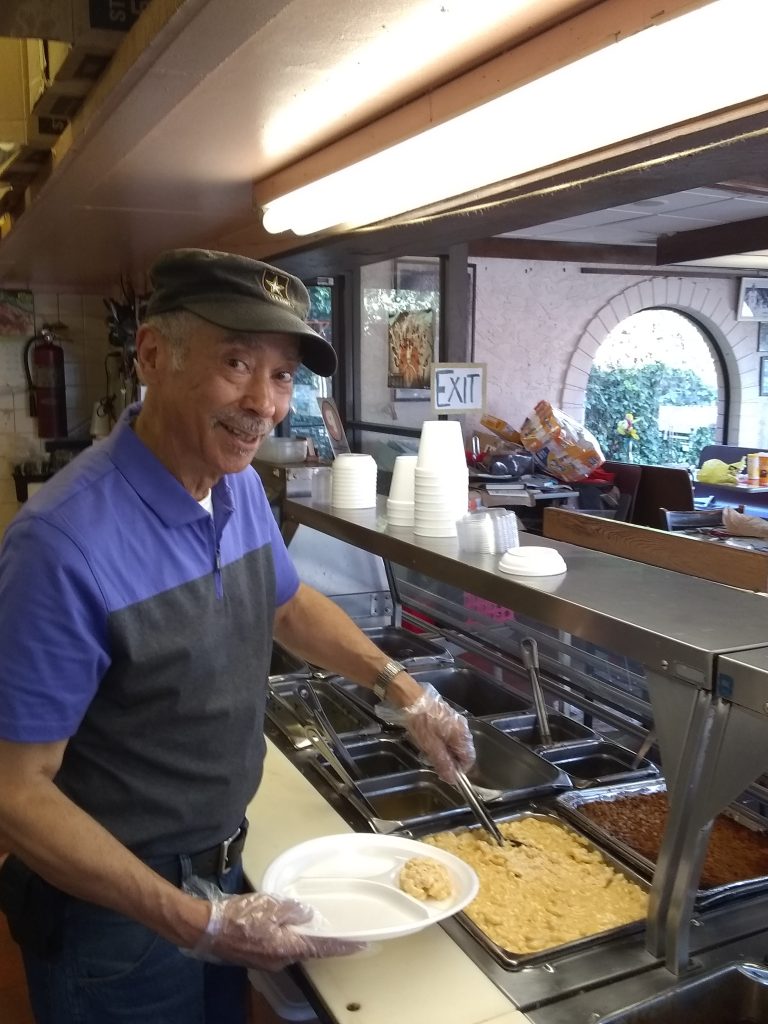 Charles Chandler opened his East Knoxville restaurant 10 years ago and it quickly became one of the top places for soul food in the city. (Photo: Anne Braly)

It’s 9:30 a.m. and the collard greens, crowder peas and butter beans are ready; the oxtails are roasting in the oven; and the pigs feet and ham hocks are simmering on the stove. It’s Soul Food Wednesday at Herman’s Soul Food and Catering in Chattanooga. Rodney Billups and his crew have been cooking since 6 a.m. Because of the pandemic, his dining room is closed and he’s choosing to offer take-out only, but it looks like he’s prepared for a crowd. There are dozens upon dozens of corn muffins at the ready, and a big pan of cracklin’ cornbread, too.

“And we’ll probably have to make more,” Billups says. “Soul Food Wednesday is our busiest day of the week.”

Soul food, in all its fried, pork-laden glory, is a cuisine different from all others, brought by Africans to America during the days of slavery.

“I remember my grandma would get a pig and cook every part of it,” he recalls. “She’d tell us that was soul food.”

It’s an offering of food that comes from the heart and feeds the soul – a cuisine filled with culture and emotion.

“There’s a lot of love that goes into the process of making soul food,” says David Swett from his 62-year-old soul food eatery in Nashville.

But how did this food on America’s menu jump from slavery to mainstream – one that’s enjoyed by whites, blacks and all people of color?

For starters, the Great Migration played a role. Many Blacks left the South following the Civil War for points North and West to better their lives, taking their food ways with them.

“Back in the ‘40s, ‘50s and ‘60s, a lot of white people had blacks people working in their homes and cooking for them,” Swett says. “And they would cook the same food for the whites that they made at home for themselves.”

Thus, the introduction of soul food into white culture was further established.

It’s the original fusion cuisine with influences and ingredients thrown into one big pot to create the soul food tradition, says Adrian Miller, the man who wrote the book on soul food — literally. Miller, a lawyer, public policy adviser and culinary historian, is originally from Chattanooga and now lives in Denver, Colo. Among his books is “Soul Food: The Surprising Story of an American Cuisine,”  a tome that in 2014 won the James Beard Book Award for Reference and Scholarship.

“Soul Food brings together the ingredients, culinary techniques and traditions of West Africa, Western Europe and the Americas,” he says. “It’s one of the key aspects for African-American cuisine, in addition to barbecue, Creole cooking, and low-country cooking.”

But don’t confuse it with comfort food. Soul food has a legacy all its own.

“I think of comfort food as a more general term, embracing several cultures,” Miller continues. “Soul food is the African-American version —  a cuisine forged during several centuries as a response to persistent trauma from slavery and oppression.”

Historically a food that began during the tragic years of slavery in the South, when slaves would get cuts of meat and vegetables that were considered inedible by their white “masters,” the great migration following the Civil War introduced soul food to the entire country. But many former slaves remained in the South, and today, a food once considered rudimentary at its best is now found in almost every kind of place, from gas stations to diners and upper-crust eateries. Here are some favorites around the Volunteer State owned by African-Americans who put their heart and soul into every bite..

Soul food is one that has stood the test of time, but Miller sees it as a cuisine that, like many, has evolved through the years and continues to do so.

It's interesting how, under horrible conditions, African-American cooks created something beautiful and delicious.

“There are several spins on traditional soul food that have taken root over the past couple of decades,” he says. The first is a health-conscious approach that substitutes healthier ingredients. Smoked turkey is used instead of pork, vegetable oils instead of butter and lard. “

But the hottest trend, he says, is vegan soul food in which no animal products are used, such as that served at The Southern V in Nashville.

Soul food, a fusion food all its own, becomes even more interesting when fused with other cuisines, a trend that is gaining momentum, adds Miller, citing examples such as collard green quesadillas and egg rolls filled with soul-food ingredients, such as pulled chicken, greens and black-eyed peas.

“They took nothing — those foods that white people wanted to throw away — and made it into something,” says Betty Joyce Chester-Tamayo, owner of Alcenia’s in Memphis.