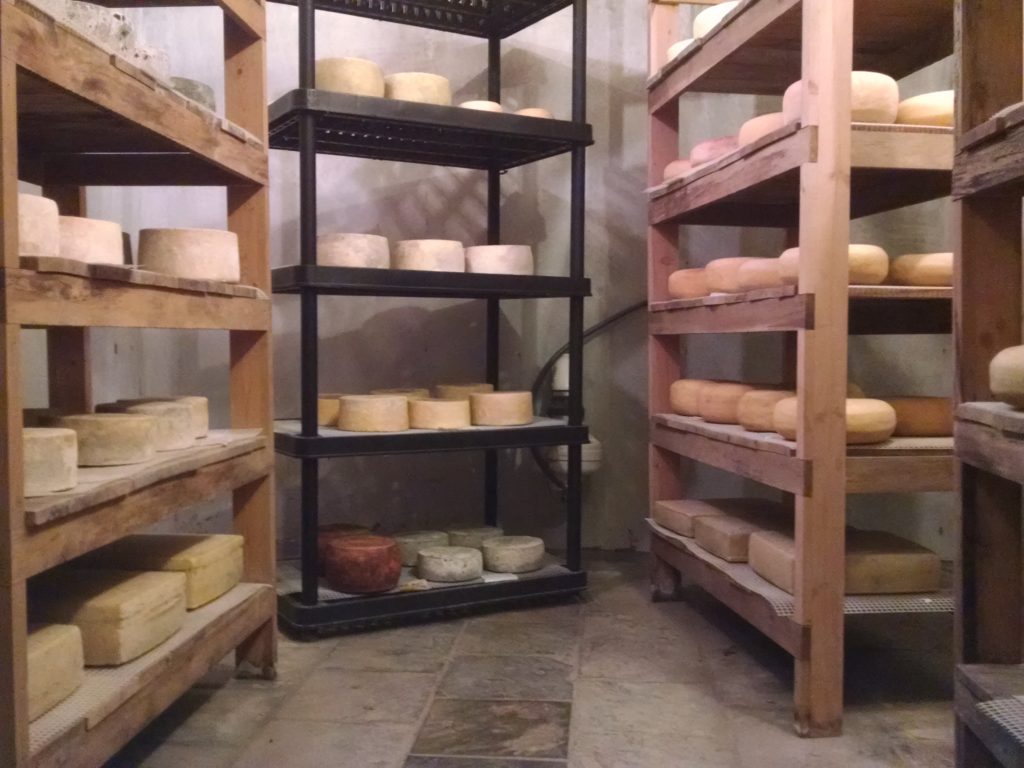 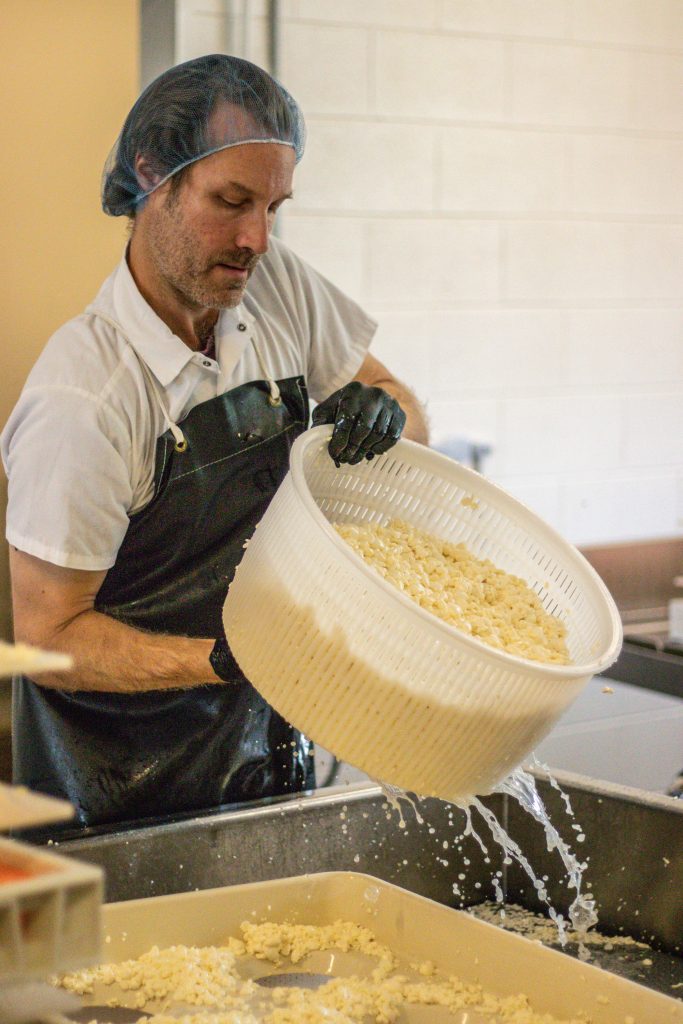 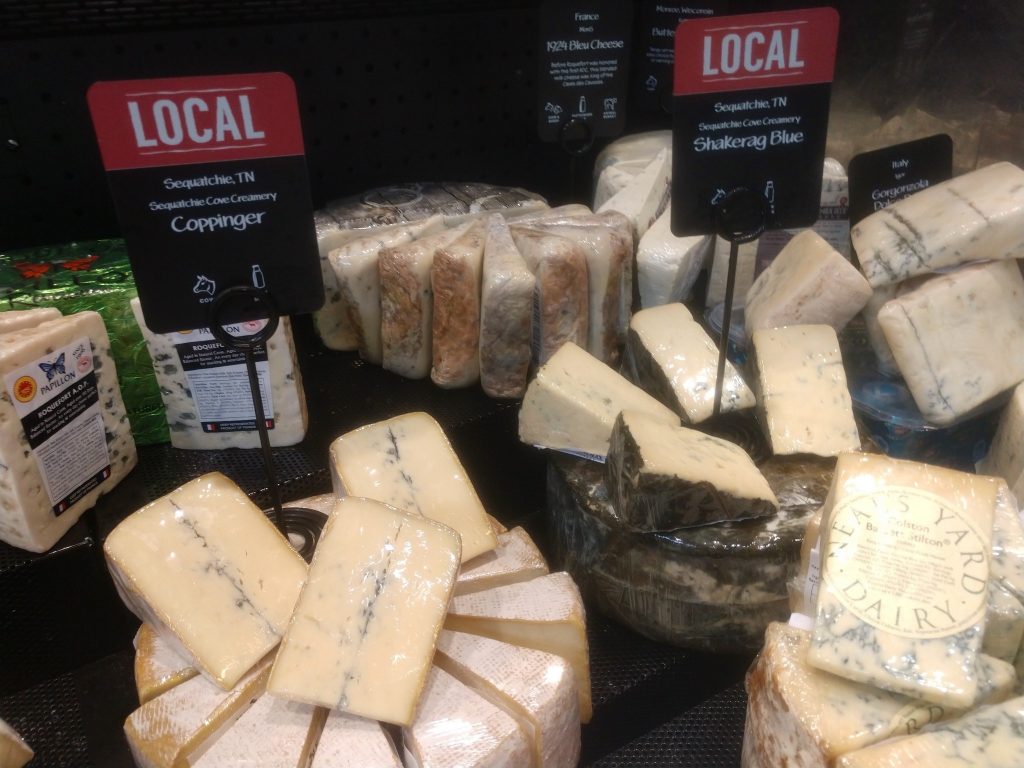 A selection of artisan cheeses, including many from Tennessee, can be found in the cheese department at Whole Foods. (Photo: Anne Braly)

Restaurants are making a slow comeback and grocery store shelves are beginning to fill again, albeit slowly. But there are industries that continue to suffer due to the COVID-19 pandemic, among them: locally made cheese.

“It’s been challenging during the pandemic for farms that produce cheese products to move large quantities through grocery and restaurant channels,” says Kim Doddridge, public information officer for the Tennessee Department of Agriculture.

The fresh chèvre comes in various flavors, and there are seven different goat, cow and mixed milk cheeses aged in caves on her property. Among the favorites are cheddar from her cows and Tanasi Tomme from the goats.

A typical day at Bonnie Blue Farm begins at 5 a.m. milking her 27 goats, followed by feeding and watering them — moms and kids — then onto the pigs before commencing to muck out the barn, load hay for the next feeding, weed the garden, and tend to the cheese in the caves and the cows in the pasture.

The full days of work were once rewarded with sell-out crowds when Tanner would take her cheese to markets around the state. But that came to an abrupt halt when the pandemic hit.

“The last farmers’ market we attended was March 14 in Memphis,” she says. “Sales were good, but then the Saturday market closed for several weeks. When it did reopen, it was not really official or advertised. The people I had going to the market to set up our booth and sell the cheese canceled, and I had no one else to go. Plus restaurants were closed, so we had no wholesale sales, either.”

The ripple effect brought on by restaurant closings resulting in wholesale business declines has been felt across the state.

Where to buy Tennessee cheese

Sweetwater Valley Farm in Philadelphia, Tenn., was forced to close its cheese shop, a popular destination for tourists wanting a true cheesemaking experience, for eight weeks. The cafe located on the farm property was shuttered for 15 weeks. As a result, cheese sales fell dramatically, says farm marketing director Mary Lyndal Harrison. “Also, our wholesale business declined due to restaurants having to close,” she says.

Padgett Arnold and husband, Nathan, opened Sequatchie Cove Creamery 10 years ago and during that time have won numerous awards for the cheese they produce at their Southeast Tennessee farm. Due to the pandemic, though, Sequatchie Cove Creamery’s wholesale business is down by 65% or more, Arnold says, adding that the creamery was forced to pivot to online sales when retail self-quarantine recommendations resulted in empty aisles and barren shelves in grocery stores.

“Our online sales were almost nonexistent before,” she says. “We saw a good bit of support in April, but since then, the momentum of online sales has dropped.”

All news is not negative though. The support of the local community came through when the Main Street Farmers Market, where Sequatchie Cove Creamery cheeses are sold every Wednesday, reopened in downtown Chattanooga.

“Sales have never been better at the market,” Arnold says, adding that they’re nearly double what they were before the pandemic. However, she says, “This is not near enough to offset the loss of wholesale outlets. Our distributors comprised easily 90% of total sales in the past, and this is where we have been impacted most.”

Tanner is unsure about the future of her farm.

“I don’t know about others, but I’m not sure the local community will be enough so that we can keep paying for the feed, labor and insurance overhead. If anyone has to service a debt on top of production, that would seem insurmountable with the current economy and customers’ loss of expendable income.”

“Now that restaurants are opening slowly and safely, that should positively affect cheese producers whose main channel was the restaurant industry,” she says.

Visit any big grocery store and the big cheeses stand out — Kraft, Sargento, Cabot and others — made in huge factories with massive rooms of gigantic machinery churning out blocks of cheese wrapped in plastic and loaded onto big refrigerated trucks to ship around the country.

Specialty cheeses, on the other hand, are produced by hand on a smaller scale, using traditional methods and ripening techniques.

“In our case, we take it another step beyond specialty,” Arnold says. “We are farmstead, which goes even further toward creating a truly unique finished product, not unlike an aged wine from a particular region and grape.”

The milk used in Sequatchie Cove’s cheese comes from cows raised on the 100-acre property.

“We seek to capture the character of our milk, and the influence of our particular agricultural surroundings and environment,” Arnold says.

This type of production, she adds, is impossible in a large-scale commercial/industrial processing facility.

And there’s an added benefit to buying locally made cheeses.

“You know exactly where your product is coming from,” Harrison says. “It’s also nice to support your local dairy.”

In an all-out effort to save the industry, entrepreneurs; cheese organizations, such as the Oldways Cheese Coalition and the American Cheese Society; and chefs, including Rick Bayless and Art Smith, have joined forces to save small cheese companies from financial ruin in a new national campaign, Victory Cheese.

“Our members and others are working together to address this urgent problem and come up with a timely and meaningful response to save their businesses and keep specialty cheeses’ treasured place in American cuisine,” says Karen Lundquist, executive director of the American Cheese Society and a member of Victory Cheese “With the launch of Victory Cheese, we’re working to boost sales and create resources, which will help carry them through and preserve the incredible craft that feeds us all.”

To learn more about Victory Cheese or to order a Victory Cheese box filled with artisan cheeses from farms around the country, visit victorycheese.com.

Anthea Stolz, executive director of the California Cheese Guild, says artisan cheesemakers in California, a state that depends on its dairy industry, have lost up to 80 percent of their revenue as a result of the COVID-19 crisis.