After the death of George Floyd, cities nationwide are having discussions about defunding the police and dismantling Confederate monuments. In a Tuesday panel on race relations, Clarksville’s mayor said he won’t defund the police “by one penny,” but he’s more than ready to rid the city of the last tributes to the Confederacy.

In mid-June, Pitts asked the Street Department to remove the Confederate Soldiers’ Memorial Bridge sign and a related grave-marking monument from Cumberland Drive. He announced at the forum that he will bring a plan to redesignate the bridge to the city council meeting in August.

“I think we’ve grown up as a city, and I think we need to be addressing that,” he said.

Clarksville Police Chief Crockarell, who was sworn in as chief just a few hours before the panel began, agreed that money shouldn’t be taken from the department.

“If we cut the budget, we cut the training” that officers receive, he said. “We are called upon to be experts in everything that there is. We are divorce court experts, we raise children, we deal with truancy, mental illness, addiction, you name it, we are the first line of all these things.”

Both Crockarell and Sheriff Fuson spoke throughout the panel about the importance of the training that law enforcement officers receive, whether it is how to interact with a suspect or victim who struggles with mental illness or when it is appropriate to use physical force on a call.

However, when asked what they believed is the cause of unarmed minorities being targeted, both law enforcement leaders hesitated.

In mid-June, Pitts asked the Street Department to remove the Confederate Soldiers’ Memorial Bridge sign and a related grave-marking monument from Cumberland Drive.

Crockarell said he wasn’t sure if it was a “fair question” and said that there are an infinite number of scenarios that may cause a police officer to react in a specific way. Fuson noted that while he couldn’t think of anything like Floyd’s death happening in the county or the city, law enforcement officers are human beings who make mistakes.

“We see it across the country, where there are ridiculous responses to certain situations, and I don’t know what to draw the conclusion of that to other than a person getting caught up in the moment and doing something they shouldn’t do,” Fuson said. “And there may be some bias hooked in that, too.”

As for what legislation could help fix such inequality, State Rep. Hodges and Robin Kimbrough Hayes, an attorney and candidate for U.S. Senate, expressed support for the George Floyd Justice in Policing Act of 2020. That bill, which passed the U.S. House of Representatives last week, would end qualified immunity for police officers, require body cameras, and ban chokeholds, among other moves. It is not expected to pass the Senate.

U.S. Sen. Marsha Blackburn was scheduled to attend Tuesday’s forum, but she did not appear. U.S. Rep. Mark Green was also unable to join, citing votes on the House floor, but he sent along a video message in which he said he believes it’s important to talk about injustices in the country, stressing the importance of hearing from others. “For me right now, at this point in time at least, I need to be listening, he said, “and I think we all need to put our listening hats on and learn from one another.” 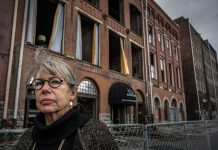