Murder of soldier in Texas leads to Ft. Campbell demonstrations

A couple holds signs for Vanessa Guillén across from the main entrance to Fort Campbell. (Photo: Celia Darrough) 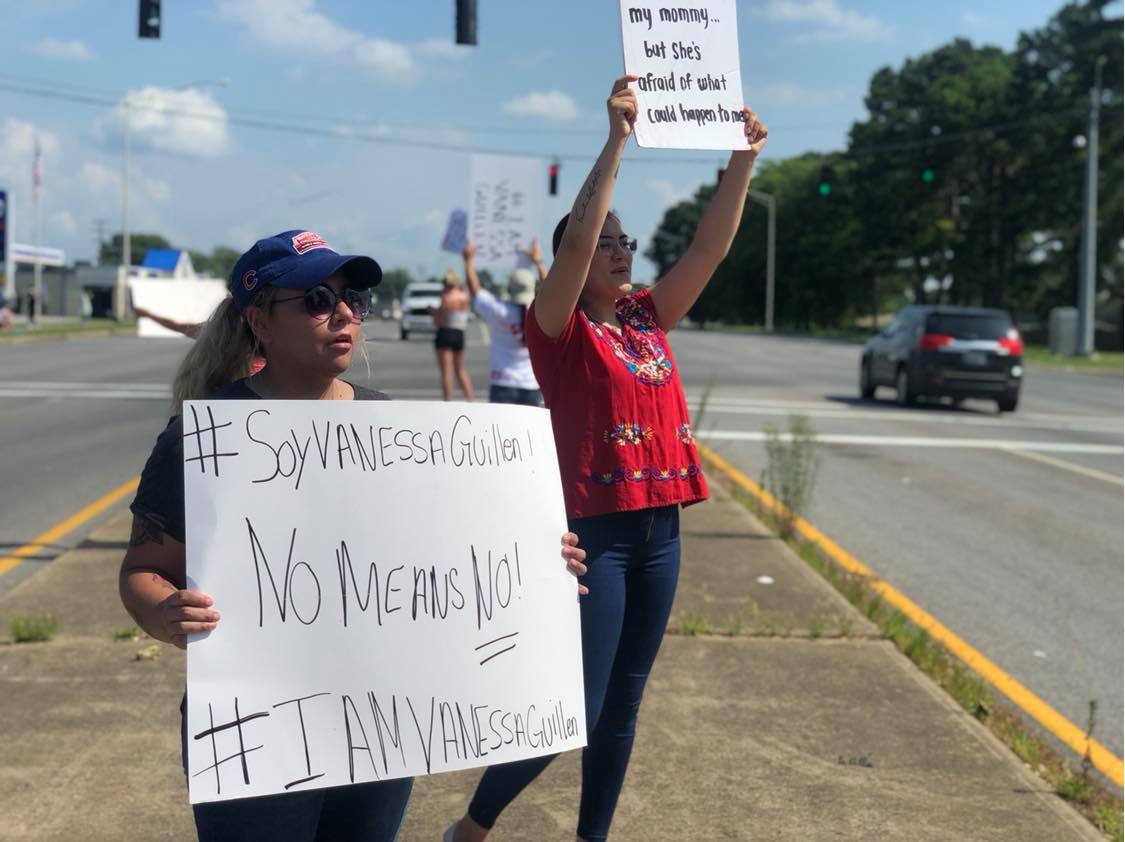 Spc. Itzel Maynard and Spc. Jackie Roman say it was important for them to protest for Vanessa Guillén, so they can give a voice to those who are too afraid. (Photo: Celia Darrough) 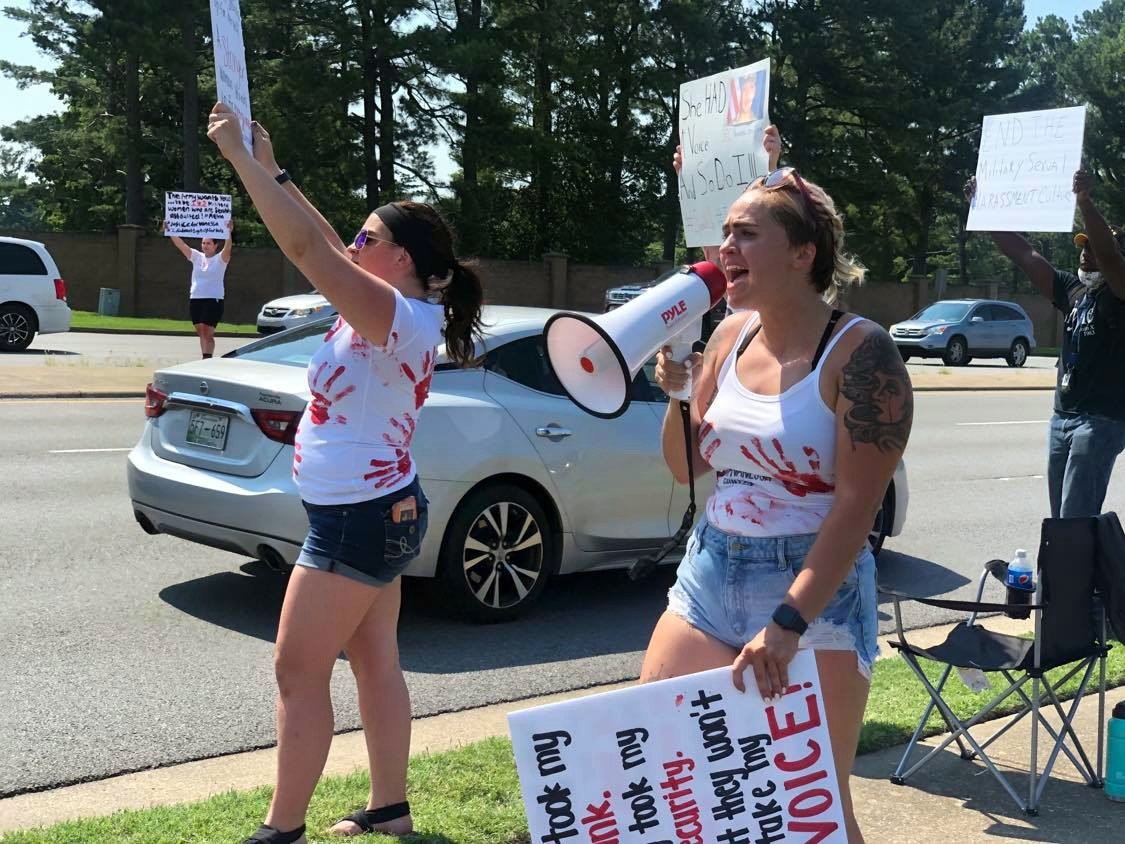 Holly Lane, who organized the protest for Vanessa Guillén, leads demonstrators in chants of “say her name” and “justice for Vanessa.” (Photo: Celia Darrough) 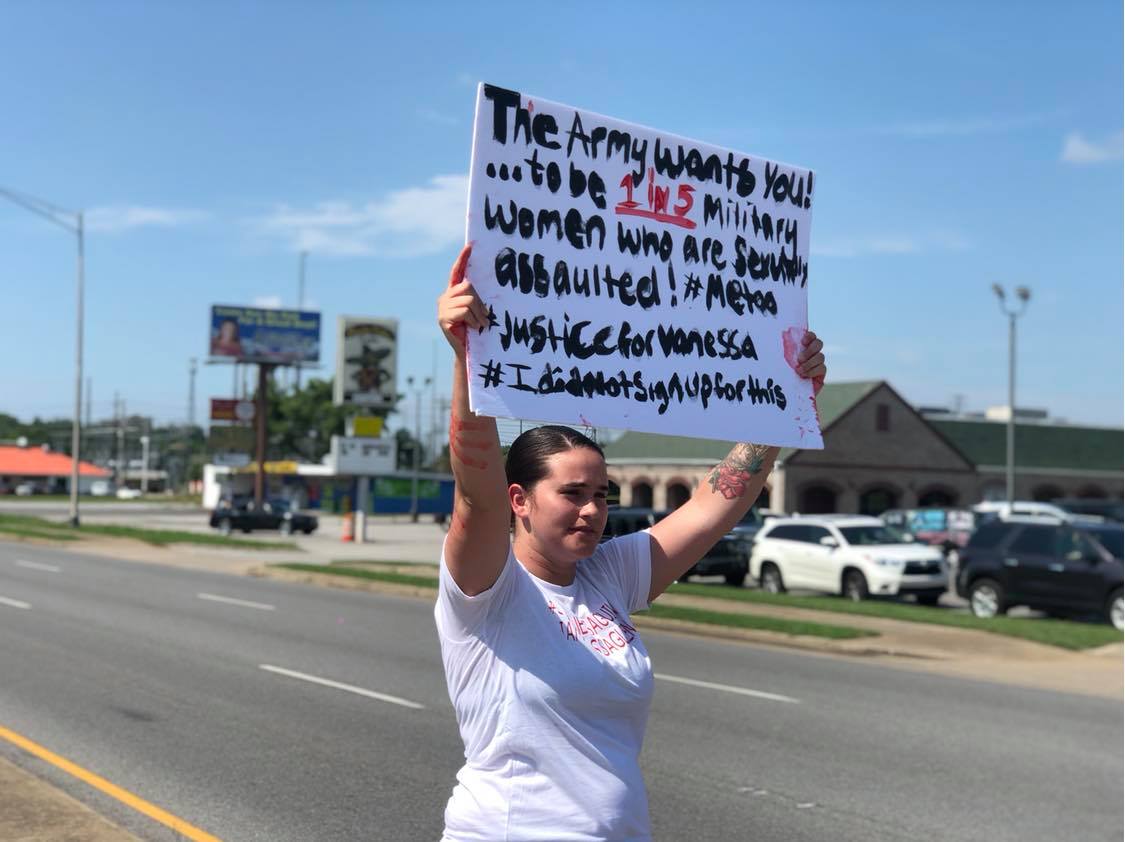 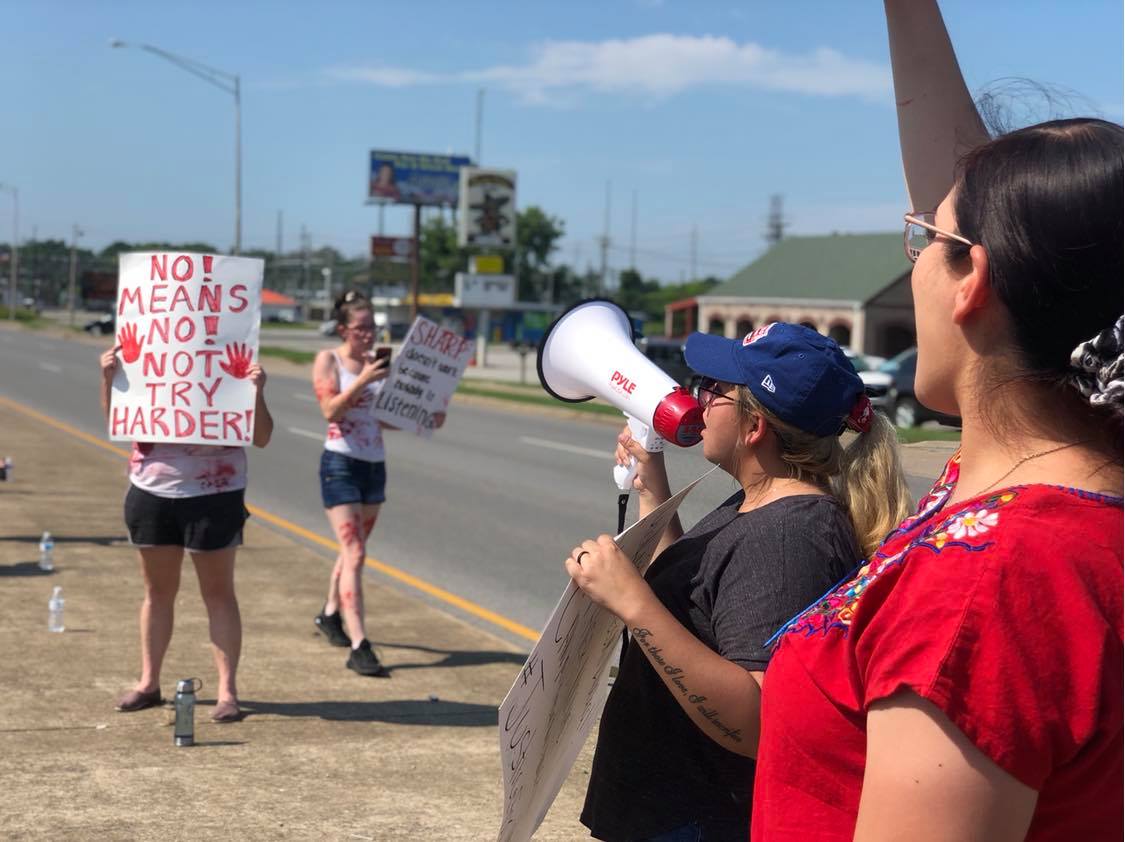 Spc. Itzel Maynard stood on the median of Fort Campbell Boulevard in front of Gate 4, the main entrance to the base, holding a sign that said “Soy Vanessa Guillén. I Am Vanessa Guillén.” As a specialist in the Army, a Hispanic woman, and someone who never reported her sexual harassment within the military, she says she couldn’t be silent anymore.

On Monday afternoon, she and a group of around 40 to 50 demonstrators protested outside Fort Campbell in Clarksville to raise awareness about Guillén’s death and sexual harassment and assault in the Army.

“We just want justice,” Maynard, 25, says. “And I just want the Hispanic community and Vanessa Guillén’s family to know Fort Campbell hears them.”

Guillén, a 20-year-old soldier stationed at Fort Hood in Killeen, Texas, was last seen in the parking lot of her unit’s parking lot on April 22. Her remains were found June 30, more than two months later, in a shallow grave near the Army post. She was reportedly beaten to death with a hammer in the arms room where she was working. The suspect in her murder died by suicide after being confronted by law enforcement; according to Guillén’s family, she had planned to to file a harassment complaint against him the day after she was killed. The Army has said it did not receive any complaints from her and has not found any connection between sexual harassment and her disappearance.

Guillén’s family told news outlets that the reason she had not yet reported the harassment is because she felt her chain of command would not take it seriously. The soldiers protesting outside Fort Campbell reiterated those fears.

Spc. Sarah Stephens, 24, says many male soldiers will use the phrase “she’ll SHARP you” when talking about female soldiers to avoid. She said she has experienced both assault and harassment during her six years in the Army, and that’s why she was out protesting Monday. “I’m here speaking up because I didn’t speak up when it happened,” she says.

Harassment and assault complaints can be filed through the Army’s Sexual Harassment/Assault Response and Prevention (SHARP) program. The SHARP website outlines several ways military personnel can handle these kinds of incidents. In an instance of sexual harassment, it states that they can approach the harasser directly, indirectly, or through a third party, they can report the harasser to their supervisor or chain of command, or they can file a formal complaint.

Other women fear retribution if they report. Holly Lane, who organized the protest, says she reported an incident to her brigade chain of command. Afterward, she says her company commander began trying to find reasons to give her an Article 15, which is a punitive action against a service member. Lane, 26, was moved to a different company, and she was due to promote from private first class to specialist because of her time in service. However, she says she never received the promotion; she left the Army in July 2019.

As for the SHARP program, Lane says there is a good intent behind it, but she thinks there are flaws in its execution.

“Most of the people involved in SHARP are there as a duty assigned to them, not because they want to be there,” Lane says. Stephens agrees, adding that the people who appoint NCOs to be trained in SHARP “don’t stop to think about how that person could affect that program.”

Maynard and Roman say the SHARP training classes military personnel must take aren’t useful and that no one actually backs survivors up when they do file a report. “[The cases] either get tossed out, or it’s just more of a ‘You’re doing it for attention, you’re a female, you don’t even do anything around here, so what are you complaining about?’” Roman says.

Multiple soldiers at the protest pointed out that they feel there’s still a culture of harassment toward women within the Army, despite the SHARP program. They say they will keep their long-sleeve uniform blouses on during physical training in 100-degree heat instead of dropping to the standard tan T-shirt because of how many comments they get about their breasts and bodies.

Commanders have the ultimate responsibility for command climate and culture . . . When we have a missing person, we take it very seriously.

Lt. Col. James Barrett, a spokesperson for Fort Campbell, says that a culture where military personnel feel comfortable reporting sexual harassment and assault results from two things: Army policy and command climate. Army programs and policies, including SHARP, are always being reassessed, he says, and the culture of respect comes from the commander and goes down to units across the installation.

“Commanders have the ultimate responsibility for command climate and culture, safety, prevention and response efforts, accountability, assessment, and safe reporting,” Barrett says. “Certainly at Fort Campbell, our commander takes it seriously. There’s just no other way to put it.”

Holly Lane says she reported an incident to her brigade chain of command. She was moved to a different company, and she was due to promote from private first class to specialist because of her time in service. However, she says she never received the promotion.

Guillén’s family has also expressed dissatisfaction with the Army’s search for her, saying it lacked urgency, The Washington Post reported. According to a statement from Fort Hood’s Maj. Gen. Scott Efflandt, Guillén’s unit, the 3rd Cavalry Regiment, began a search for her the day she went missing. He said the Army’s Criminal Investigation Division (CID) then began an investigation the next day.

He says Fort Campbell has policies in place for when a soldier is missing but situations are handled on a case-by-case basis. He stresses that people shouldn’t jump to conclusions until an investigation is fully completed, because initial information is not always correct, but he says Fort Campbell shares the concern that people across the nation are feeling about Guillén’s death.

“When something happens to a member of our Army family, we all feel it,” he says.

But as shown at the protest, not everyone feels supported. Lane, who says she also experienced sexual assault before she joined the military, says the Army “failed” her. At the protest, she and other demonstrators wore white shirts with red paint handprints smeared all over. Lane says she wanted her message about what happened to her and to Guillén to be clear to the hundreds of people driving into and past Fort Campbell.

Murder of soldier in Texas leads to Ft. Campbell demonstrations

Celia Darrough is a freelance journalist based in Clarksville. She is the former senior news editor for Bustle and has also written for Mic, Refinery29, and Thrillist. Celia has lived and reported all across the country, from Alaska and Oregon to New York City and now Tennessee. You can follow her on Twitter at @celiadarrough.