WASHINGTON, DC – SEPTEMBER 19: U.S. Sen. Lamar Alexander (R-TN) chairman of the U.S. Senate Committee on Health, Education, Labor and Pensions (HELP) holds a confirmation hearing for Eugene Scalia to become the next U.S. Labor Secretary on September 19, 2019 in Washington, DC. Scalia, son of late Supreme Court Justice Antonin Scalia is a partner with Gibson Dunn & Crutcher where he led the Labor and Employment Practice Group for the past 12 years. (Photo by Astrid Riecken/Getty Images)

WASHINGTON — U.S. Sen. Lamar Alexander — a leading voice in federal education policy in the U.S. Senate — continues to support reopening the nation’s schools even as COVID-19 cases surge in Tennessee and across the nation.

But he also supports more aid to help schools reopen safely — a goal at odds with the Trump administration’s recent threats to cut federal funding for schools that don’t resume full-time, in-person learning this fall.

Alexander’s spokeswoman Ashton Davies did not respond to questions about whether the veteran Republican — who chairs the Senate Health, Education, Labor and Pensions Committee and served as education secretary under President George H. W. Bush — has changed his position in light of rising cases in Tennessee and other states.

Children and youth face “some health risk” in returning to school Alexander tweeted on June 30. “But in my view, the greater risk is not going back to school.”

The Tennessee Department of Health reported more than 67,000 cases in the state as of Tuesday, continuing an upward trend since March.

Nashville reported a record-breaking day of new infections Tuesday, prompting health officials to extend the city’s modified Phase 2 reopening plan into the “foreseeable future,” according to The Tennessean.

Last week, the American Academy of Pediatrics issued a joint statement with other major education organizations calling on schools to reopen in a way that is “safe for all students, teachers and staff” and that is grounded in science.

Some Tennessee school districts will provide in-person options in the new school year, according to News Channel 5. Metro Nashville Public Schools planned to reopen schools for in-person learning on Aug. 4 but have since reversed course, citing the “recent and sustained spike” in cases in Nashville and Davidson County. The district will start the new school year with all students in virtual learning environments at least through Labor Day.

On Tuesday, Vice President Mike Pence travelled to Louisiana to make the administration’s case for reopening schools. “We really do believe that to open up America again, we need to open up America’s schools,” he said in remarks at Louisiana State University in Baton Rouge.

Last week, the American Academy of Pediatrics issued a joint statement with other major education organizations calling on schools to reopen in a way that is “safe for all students, teachers and staff” and that is grounded in science.

The statement clarified an earlier call for in-person education by the American Academy of Pediatrics. The administration seized on the original call to back its push for in-person schooling, a move widely regarded as necessary to boost the economy ahead of this fall’s elections. “The American Academy of Pediatrics reflecting on the impact of in-person learning for our kids, from kindergarten to senior year in high school, is very profound,” Pence said Tuesday.

Trump and Education Secretary Betsy DeVos threatened to deny federal funding to schools that don’t allow for full-time, in-person learning, but have since backpedaled, according to Politico. On Monday, White House economic adviser Larry Kudlow told Fox News that the president is considering giving more funding to school districts that fully reopen.

U.S. Rep. Jim Cooper — one of two Democrats in the state’s congressional delegation — slammed the administration’s attempt to force states to adopt in-person learning. “It’s outrageous to force all schools to open under threat of loss of federal funding,” he told the Lookout. “That is cruelty in its worst form.”

The federal government provides the nation’s elementary and secondary school districts with roughly 8% of funding. The rest comes from state, local and private sources.

Doctors’ and teachers’ groups have said denying funds would put “already financially strapped schools in an impossible position that would threaten the health of students and teachers.”

U.S. Rep. Rosa DeLauro, a Connecticut Democrat who chairs a House Appropriations subcommittee with jurisdiction over education funding, pointed out in a statement that Congress hasn’t granted the administration the authority to withhold federal education funds. Forthcoming legislation, she said, “will require the administration to promptly and faithfully deliver this aid to public schools.”

Alexander’s Senate committee has held several hearings on the safe return to school and work in recent months. In a recent interview with CNBC, he said the federal government should give schools and colleges more money to safely provide in-person learning.

The Senate is expected to begin debate over another coronavirus relief package, which could include more money for schools, when it returns from its July Fourth recess next week. Alexander estimates that $50-$75 billion is needed for elementary and secondary schools and colleges and universities to reopen safely, according to Education Week. The money would be used to help schools cover costs of barriers, hand sanitizer and other resources as they prepare to reopen.

On the other side of the Capitol, U.S. Rep. Bobby Scott of Virginia, chair of the House Education and Labor Committee, blasted the administration for putting politics over health and safety.

Reopening schools without the resources to do so safely poses risks to students and educators, Scott said in a statement. He called for support for a recent House-passed infrastructure package that would increase investments in state and local funding, which he said would help schools, and the economy, recover.

DesJarlais — a physician and member of the GOP Doctors Caucus — signed on to a resolution declaring that local officials should make decisions about how and whether to reopen schools. The consequences of staying out of school differ depending on students’ location and economic status and that decisions about opening and operating schools “are best made at the local level,” the resolution states. 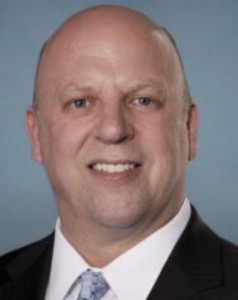 DesJarlais, who represents the state’s fourth district, is the only member of the state’s delegation who has signed on to the resolution.

His office did not respond to requests for comment. Nor did spokespeople for Roe or Green — two other physicians in Congress from Tennessee.

Roe is chair of the GOP Doctors Caucus and a member of the House Education and Labor Committee. He is retiring from his first district seat in northeastern Tennessee after six terms in the House. In May, he wrote a column in support of GOP Gov. Bill Lee’s plans to reopen.

He joined other Republican doctors in Congress in releasing a video about combating the virus in March. “If you do contract the illness, don’t panic,” Green, a member of a select coronavirus committee of the House Committee on Oversight and Reform, said in the video. “The majority of cases will resemble a bad cold or flu.”

DesJarlais, who also participated in the video, said “good hygiene and simple preventative measures” can help combat the virus.

Roe hasn’t published news or information about the Doctors Caucus’ approach to the virus on his website, and the group hasn’t posted anything about the virus on its Twitter feed.

DesJarlais and Green are members of the conservative House Freedom Caucus, which held a press conference last week calling for a resumption of in-person education.

Cooper said leaving decisions to local districts is “in general” a good idea. Schools in very rural counties may be able to safely reopen in-person learning, he said, but schools in other areas may not be able to — despite a “genuine” need for child care and education. A “blanket policy of forcing all schools to reopen” could harm the health of students, teachers and families, he said.

Allison Stevens is a reporter for States Newsroom's Washington bureau.