Jim Cooper has regularly faced Republican opponents in November in the decades he’s been in Congress. He’s beaten them every time (except for an unsuccessful 1994 Senate run), he said, by appealing to moderate conservatives who would otherwise vote red.

That’s how Democrats flipped the House of Representatives in 2018, he told The Lookout last week.

“A few people like me know how to campaign in red areas,” he said. “You have to be gracious to your opponents. They are gettable if we show them that we’re a better alternative.”

But this year, for the first time in a decade, he’s had to do the work of convincing Democratic primary voters.

The fiscally conservative Blue Dog, who has been in Congress all but eight years since 1983, is now bringing that strategy to a primary in which he faces activist and lawyer Keeda Haynes, a former Nashville public defender.

Cooper is from a local political dynasty, and has far more campaign cash than Haynes. Few expect him to lose.

But as young progressives such as Alexandria Ocasio-Cortez and Jamaal Bowman have toppled powerful incumbents in recent years—and as the country faces a public health crisis and a reckoning over police brutality—some are wondering whether Haynes could be the next.

For years, Syler was the Tennessee Chief of Staff to former U.S. Rep Bart Gordon, a moderate Democrat. He said a high-turnout election would benefit Cooper. Amid the pandemic and the Black Lives Matter movement, low turnout could make the race a tossup.

“These aren’t normal times,” Syler said. “It’s just very difficult to use past knowledge and history to predict things. A lot depends on who turns out, and as a former campaign manager, it would be one of those things that keeps me up at night.”

Syler said the old saying, “all politics is local,” no longer applies as Democrats and Republicans become increasingly polarized.

“That’s out the window now,” he said. “All politics is national.”

Early voting began Friday and the election is August 6. A third candidate, Josh Rawlings, is also running in the Democratic primary.

“Does it matter that you’re the smartest person?”

Haynes was incarcerated just after graduating from Tennessee State University. Her firsthand experience motivated her to pursue a law degree to fight for vulnerable Nashvillians as a public defender.

“I am the better candidate,” she told The Lookout. “I am more in tune with the community.”

She said Cooper has been ineffective at serving Black Tennesseans. She said Cooper’s reputation as a studious, wonky intellectual won’t persuade people in the neighborhoods she knows the best.

Police reform advocate Gicola Lane, who ran unsuccessfully for Metro Council last fall, has given more than $1000 to her campaign. Lane said Haynes aims to expand the electorate to infrequent voters, many of whom have been through the criminal justice system.

“She helped me stay out of jail? The least I can do is vote for her.”

Haynes has the endorsements of many local and national progressive groups, including Indivisible, Our Revolution, Democracy for America and former presidential candidate Marianne Williamson.

She’s also got local endorsements, including that of state Sen. Brenda Gilmore. In a statement quoted by The Scene, Gilmore said:

“With the country and our state reaching a turning point for change, it is time that we have a leader in Congress who reflects the hopes and aspirations of the young people calling for change. Keeda Haynes is such a leader that will fight for causes and issues that will deliver the reforms that we need. I strongly support Keeda Haynes for Congress and encourage everyone to support her. She will be the voice that we need during these challenging times.”

As the coronavirus spreads rapidly in Tennessee, healthcare is at the top of many Democratic voters’ minds.

Cooper hasn’t taken the progressive stance in support of Medicare for all, which Haynes has. He said he isn’t opposed to it, but it’s a long-term goal when there are more immediate fights to provide more Tennesseans with healthcare.

Instead, he’s focusing on pushing the state to expand Medicaid through the Affordable Care Act, also known as Obamacare. Many majority-Republican states, such as Oklahoma and “Mike Pence’s Indiana,” have opted for the Medicaid expansion.

“A lot of the red states are looking at each other [saying], ‘We know we’re gonna fold on this one day soon. When are we going to fold?’” he said. “If we say ‘Medicare for all,’ that takes the heat off Republicans. It’s really important strategically to keep the pressure on.”

Haynes faults Cooper for not fighting hard enough for healthcare or affordable housing, as the military budget continues to grow near Iraq War levels.

She noted the fiscally conservative Cooper accepts campaign contributions from defense contractors while he oversees the military as a member of the House Armed Services Committee. Among his biggest contributors are Lockheed Martin, L3 Technologies, Northrop Grumman and Raytheon.

For his part, Cooper said those PACs give much more generously to other committee members. He said he opposes the campaign finance system, but won’t reject PAC money, which would amount to “unilateral disarmament.”

“I was having to purchase stuff to be out and around people,” she explained. “I can’t wear my robe and my jeans and my T-shirts out when I’m campaigning.” 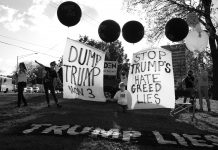 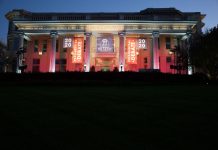 The Blue Dog vs. the underdog: facing an activist challenger, Cooper makes appeal to “gettable” conservatives