Sometimes it takes a sharp mind and large vocabulary to distinguish between actual obscure and erudite words (useful for Scrabble and standardized tests) and the invented brand names for new pharmaceuticals being flogged in television advertising.  That’s when I stumbled on several good political words that work better as drug names.

A male announcer speaks over shots of New York skyscrapers, file footage of Taj Mahal casino, and Mar-A-Lago.  “Are you a sociopath developer and narcissist looking to connect better with the common man?  Do bankruptcies leave you longing for acceptance?  Has cheating on your wives lost its sense of fun?  You need Inchoate, the new political remedy from our friends at Big Pharma.”

A second announcer, female, speaks softly and quickly, “Side effects of Inchoate include: rage tweeting, MAGA, slurred speech, orange skin, covfefe, dysfunctional government, and a desire to purchase Greenland.  Do not use Inchoate with hydroxychloroquine.  Do not use Inchoate when operating machinery or government agencies.  Inchoate, it’s what we’ve become.”

The ad begins with a turtle-like man seen in close up; he speaks.  “Hello, I’m Senate Majority Leader Mitch McConnell and I’m not just a paid spokesman for Egregious, I’m a satisfied user.  Egregious combines two proven Republican favorite remedies, Duplicitous and Mendacity.  I’ve used Duplicitous for years in skewing the tax code to favor the rich, and I’ve used Mendacity in holding open court vacancies during Obama and then rapidly filling them with extreme Trump nominees.  Egregious keeps Mitch being Mitch.”

The camera pulls back to reveal McConnell’s wife and Transportation Secretary Elaine Chao.  She says, “Mitch, let’s get my family another sweet government contract.”  He replies, “Of course, dear.”

Voice-over Announcer: “Egregious should not be taken in front of cameras, except for CSPAN.  Egregious never should be mixed with Inchoate, but can be mixed with bourbon or other alcohol.  Egregious overdoses only can be cured with large helpings of Amy McGrath.”

We switch to a medium close-up of Georgia’s governor.  “Hi,” he says, “I’m Brian Kemp.  It turns out fixing an election was a lot easier than fixing a public health crisis.  I trust Dystopia.  It works for me, even if the daily dose is difficult to swallow.”

A man is seen only in dark outline against a picture window.  He speaks.  “My name is Lindsey and I’m from South Carolina.  I used to be outspoken, independent, and a military lawyer.  One day a bully beat me rather severely.  He even read aloud my phone number to the world.  Now I’ve learned to support every crazy notion of this bully has, and to golf with him—all thanks to the miracle drug Obsequious.”

The scene slowly fades to a different man.  We see him only from behind as he walks down a Senate corridor.  We hear him say, “I had a bully who insulted my wife and accused my father of crimes.  I’ve learned to love that bully thanks to Obsequious.”

We see the Obsequious package as an announcer says, “Obsequious, available in pharmacies everywhere, and in the U. S. Senate cloakroom.”

Scenes of chaotic hospitals with patients overflowing into corridors are shown as we hear Ray Charles singing “Georgia on My Mind.”  The music continues softly underneath as we switch to a medium close-up of Georgia’s governor.  “Hi,” he says, “I’m Brian Kemp.  It turns out fixing an election was a lot easier than fixing a public health crisis.  How do I get up each day and pile bad decisions on top of each another?  I trust dystopia.  It works for me, even if the daily dose is difficult to swallow.  Dystopia, getting closer every day.”

“I’m Bill Lee, governor of Tennessee.  You’d think it would be difficult to ignore scientific evidence about mask mandates and closing bars.  It’s not hard at all.  Every day I take a healthy dose of Insidious washed down with a tepid gulp of water.  Insidious effects show up every day I bumble my way through a pandemic.  Insidious, it’s catchy in ways you barely see.” 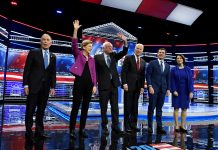 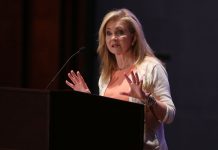