Since the COVID-19 pandemic smashed into Nashville in March, the city’s restaurants and bars have been restricted to only to-go orders and had their dining room capacities limited.

Restaurants and bars have been forced to implement costly safety measures like sneeze guards and offering free masks to customers. In recent weeks, regulations from Nashville Mayor John Cooper and the health department have been ramped up a notch as bars were completely shut down and restaurants were given a 10 p.m. curfew.

The result has been restaurants shuttering, staff getting laid off and hours getting slashed. And, despite the painful business implications of the pandemic, a very small number of bars, namely the lower Broadway honky tonks, continue to receive the blame for Nashville not getting the spread of COVID-19 under control.

All of those health regulations and the ensuing fallout on Nashville’s hospitality industry call into question: just how responsible are restaurants and bars for the spread of the virus in Davidson County?

The answer, which the Metro Health Department initially said it could not release before reversing course, is “more than 80 cases” have been identified in clusters from restaurants and bars through the city’s contact tracing effort, according to a department spokesman.

The number comes with a caveat since it’s unclear if the health department’s contact tracing program has kept pace with the onslaught of positive cases in July. Contact tracing can be inexact, and its primary goal is to quarantine people who have been exposed and not to merely pinpoint where the virus was contracted. Also, Metro’s contact tracing program focuses on Davidson County, meaning if a group of out-of-town tourists contracted the virus at a honky tonk, the city may never know about it.

There have been 21,770 confirmed cases of COVID-19 in Nashville. Metro health officials say they have the department has done contact tracing for more than 21,000 individuals.

Bars and musicians suffer due to shutdown orders

Nashville musician Scott Collier, who primarily makes his living playing in honky tonks on lower Broadway, said he believes the low number shows too much of the city’s response to the pandemic has focused on restaurants and bars. Collier said that as the shutdown has extended into August, he’s grown worried how he will make ends meet.

“It’s been rough. Like me, I’m raising my son by myself. So it’s been tough. I went through my savings and basically I’m just surviving. I’m in survival mode just like everybody.”

Collier said inside the honky tonks, customers were required to wear masks, tables were spaced out to comply with social distancing rules and staff were very careful in how they handled food and served people. Collier is one of several restaurant and bar workers who participated in a protest on Monday at the Metro Courthouse.

Collier believes bars should be treated the same as restaurants and that Metro should partner with musicians to be part of the solution in messaging around COVID-19.

Metro Health Department initially said it could not release numbers traced to bars and restaurants before reversing course. Of more than 21,700 cases in Davidson County,  “more than 80 cases” have been identified in clusters from restaurants and bars through the city’s contact tracing effort.

“There’s no need in destroying people’s livelihood and lives,” Collier said. “Some people have moved back home. We’ve lost a lot of good people. Seeing that number. It really (makes me angry).”

Nashville bars and restaurants have been forced to close since the pandemic, with some owners blaming over-regulation. Geoff Reid, owner of the songwriter bar and music venue the Local, said he is forced to close and cited the city’s regulations as the reason in a recent post on Facebook.

Dr. Alex Jahangir, who chairs Metro’s coronavirus task force, has said that contact tracing revealed the home to be a top place the virus is spread.

“I cannot afford to hemorrhage money for months on end, forced to pay 34% more in property taxes, and forced to remain closed indefinitely,” Reid said in his post last week. “We have now lost three months of revenue this year and with the looming property tax increase and uncertainty of when we will be allowed to resume operations, with the mayor keeping us in phase two indefinitely, I feel we have no choice but to close our doors.”

Regulations were necessary, and have worked, Cooper administration says

When he announced the city was reverting to Phase 2 of its reopening plan last month, Cooper said, “It’s worth noting that Nashville’s rate of confirmed cases did decline while bars and restaurants operated at 50 percent capacity in May.”

Cooper aide Ben Eagles said the mayor’s orders temporarily closing bars and limiting hours for restaurants have helped slow the spread of COVID-19. Metro’s transmission rate has dropped below 1 in recent days, meaning the spread is slowing down. In addition to Cooper’s executive orders on bars and restaurants, the health department board of directors passed a county-wide mask mandate.

“We know that bars are high-risk environments for spreading COVID-19, as bars exhibit each of the “three C’s” – closed spaces, crowded places, and close-contact settings,” Eagles said. “Contact tracing is complicated work, but Public Health found bars were a source of clusters in Nashville. One month ago, after seeing the first evidence of the virus spreading at bars here, we closed them. The decision to close bars in Nashville was later validated by the White House Coronavirus Task Force’s recommendations.

We know the bars are high-risk environments for spreading COVID-19, as bars exhibit each of the three C's - closed spaces, crowded places, and close-contact settings.   – Ben Eagles, Office of Mayor John Cooper

“Mayor Cooper is sensitive to the toll that closures are taking on employees and business owners, and maintains that the best path for reopening depends on wearing masks and social distancing.”

Health Department spokesman Brian Todd said the increased regulation was necessary after seeing a rise in cases associated with bars.

“We saw the increase and identified the cluster associated with bars not long after entering Phase 3,” Todd said. “You’ll recall that’s when there was a sharp increase in cases in Nashville. That’s when the decision was made to move back to a modified Phase 2 that required bars to close.”

Some city leaders have been pushing the health department to disclose more data regarding instances when bars are responsible for positive cases or be more flexible in its regulations. Metro Councilwoman Nancy VanReece, who represents Madison, North Inglewood and Maplewood areas, questioned health officials during a call with council members last week whether bars could be allowed to stay open and regulated as restaurants. VanReece worried that bar owners who have worked hard to follow the rules are being punished because of a few bad operators.

“It’s important across Nashville that our cultural institutions get back to operating, because that will signal that things are returning to normal and it will mean people are getting back to work,” VanReece said.

Benedict said Nashville needs to implement a mandatory 14-day self-quarantine for people visiting here, a step other cities and states have taken.

“Our residents are hurting, and we need the economy to open,” Benedict said. “However what I hear throughout my district, and across the city, is that we cannot reopen until we have compliance, and until everyone follows the same rules. Business owners join me today to speak to the impact the prolonged closure is having on them, their employees, and their future.

“Nashvillians are hurting financially, especially those in the hospitality industry. They want to get back to work, although the dangers are too high. If the greed of a few causes the city to shut down, then those few must bear the blame.” 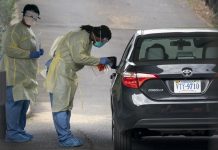