In the national race to develop a vaccine against COVID-19, officially dubbed “Operation Warp Speed,” Nashville residents are at the starting gate.

Two major Phase III vaccine trials are separately getting underway at Vanderbilt University Medical Center and Meharry Medical College. A Nashville research firm is tentatively partnering with the Metro Health Department on two additional Phase III trials, bringing the total conducted in Nashville to at least four. Additional trials are expected to be announced as new potential vaccines are readied for testing.

The city’s high infection rates coupled with the presence of major research institutions with long experience conducting clinical trials means thousands of Nashvillians will be part of an unprecedented and coordinated effort to enroll 30,000 people nationwide to participate in trials for a potential vaccine in the coming months.

“I’m excited about it because it means that Nashville will have a robust participation in vaccine studies,” said Dr. James Hildreth, an immunologist and Meharry’s president and chief operating officer. “It is going to break a record for fastest-vaccine ever, as is becoming increasingly clear.”

Meharry and Vanderblt are part of the global HIV Vaccines Research Network, a decades-old collaborative international effort among scientists researching potential vaccines that in the past six months has been abruptly redeployed to respond to the COVID-19 pandemic.

In February, Dr. Hildreth and his staff were gearing up to test a potential new HIV vaccine. By March, those plans had come to a halt and those clinics became part of the newly formed National Institute of Health’s COVID-19 Prevention Trials Network.

“A lot of the preparations we were making for HIV turned out to be preparations for COVID 19,” he said. “There’s no way in February when we were finalizing our plans for HIV that we could have known that a month later we would completely be shifting our gears to do something different.”

Meharry plans to enroll more than 300 volunteers, working out of its Clinical Trials Research Center on the Meharry campus. Dr. Hildreth said their focus will be to encourage and enroll as many minority individuals as possible “because we have just got to know that the vaccine works in that group.”

While that pace may seem slow in the face of a pandemic that continues to cripple daily life for people around the globe, Hildreth said in the context of vaccine development, the speed with which the virus has gone from first detection to genetic sequencing via super computers to vaccine trials has been unprecedented.

“As soon as the genome for this virus was completely sequenced, within about 21 days of the sequence being made public one of the companies already had a vaccine candidate ready to go,” he said. “Three weeks. The significance of that is in the past that process alone might have taken a year or so, or longer, to develop a vaccine candidate. But because of the power of big data, supercomputers and data analytics we can literally recreate proteins in cyberspace and create antibodies and see whether they dock together.”

“For me it’s amazing to think in less than two years we’ll have a vaccine for this virus that has been made possible by the age that we live in where we can do things in cyberspace that used to be only done in a laboratory, and can be done in hours rather than months or years. It’s truly extraordinary.”

Vanderbilt is testing a vaccine candidate created by the pharmaceutical corporation Moderna Therapeutics with three specific categories of individuals: those over 65 years old, those with risk factors such as lung disease or diabetes and people who are at higher risk of being exposed to the virus, including health care workers.

By last week, Vanderbilt had received over 3,000 inquiries about participating, he said. The study thus far has 750 slots.

It is an entirely new type of vaccine. Traditional vaccines contain a weakened or inactive form of the virus, or a virus protein, that kickstart an individual’s immune system into producing antibodies that can fight future infections.

The Moderna vaccine is a “Messenger RNA” or mRNA, vaccine that does not contain any virus. Instead, the vaccine contains a synthetic version of RNA the virus uses inside a cell to replicate and spread. The vaccine is designed to trick the body’s immune system into sensing the virus is present and make antibodies.

“Nothing like this has ever been used before,” Dr. Kalams said. “I like to say it’s not my first pandemic. But to have something affect so many people so simultaneously, so rapidly…Our whole team feels like this is really big.”

The clinical trials are part of a coordinated national effort, Operation Warp Speed, a partnership between the National Institutes for Health and the nation’s big drug makers.

The goal is for a safe and effective vaccine from one or more those companies —  Moderna, Johnson & Johnson, AstraZeneca, Novavax, Pfizer, Sanofi and GlaxoSmithKline  — to have their first dose ready by January 2021.

Separately, pharmaceutical companies are doing their own clinical trials in order to test as widely as possible. 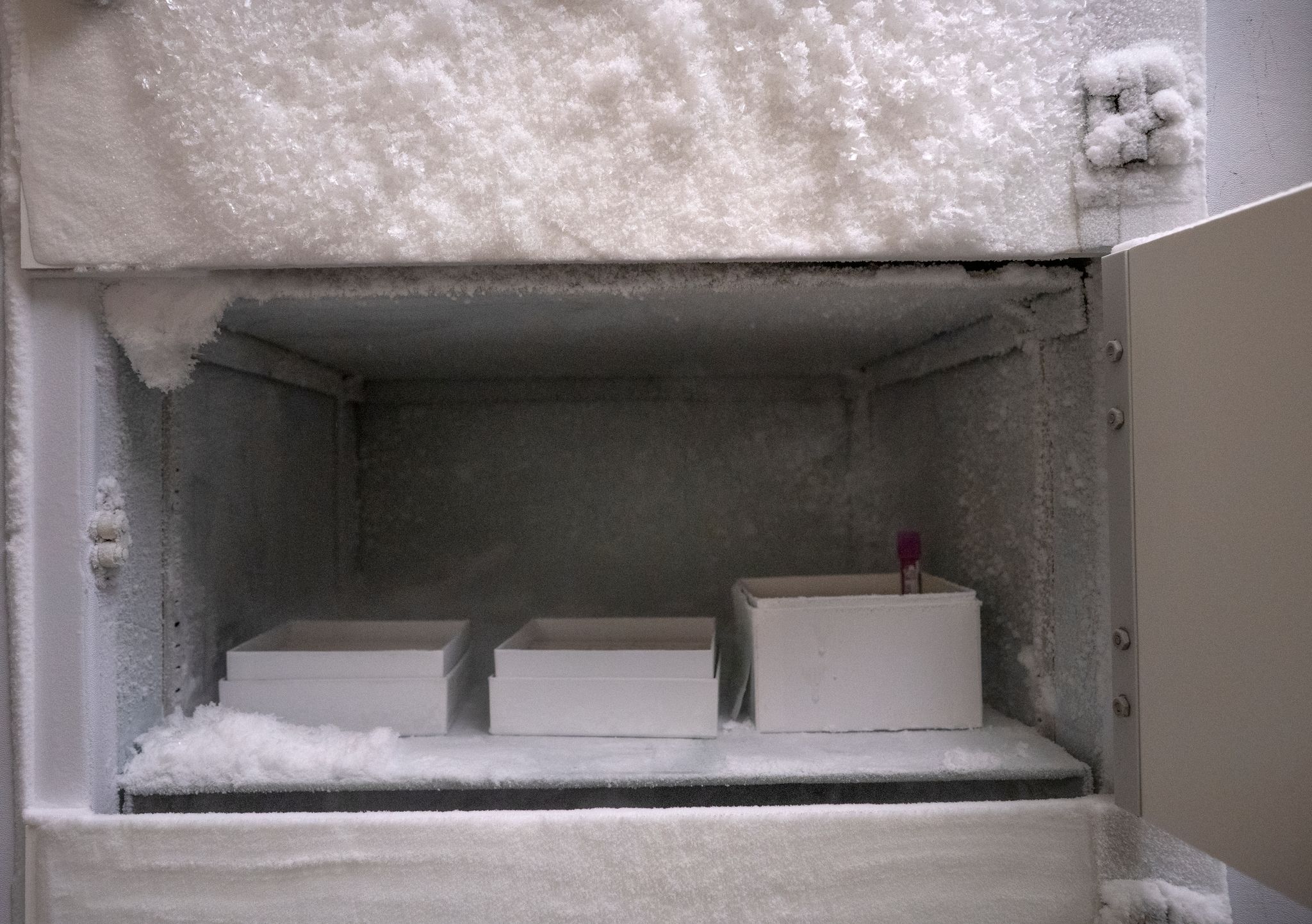 Icebox in which vaccines will be stored at Clinical Research Associates. (Photo: John Partipilo) 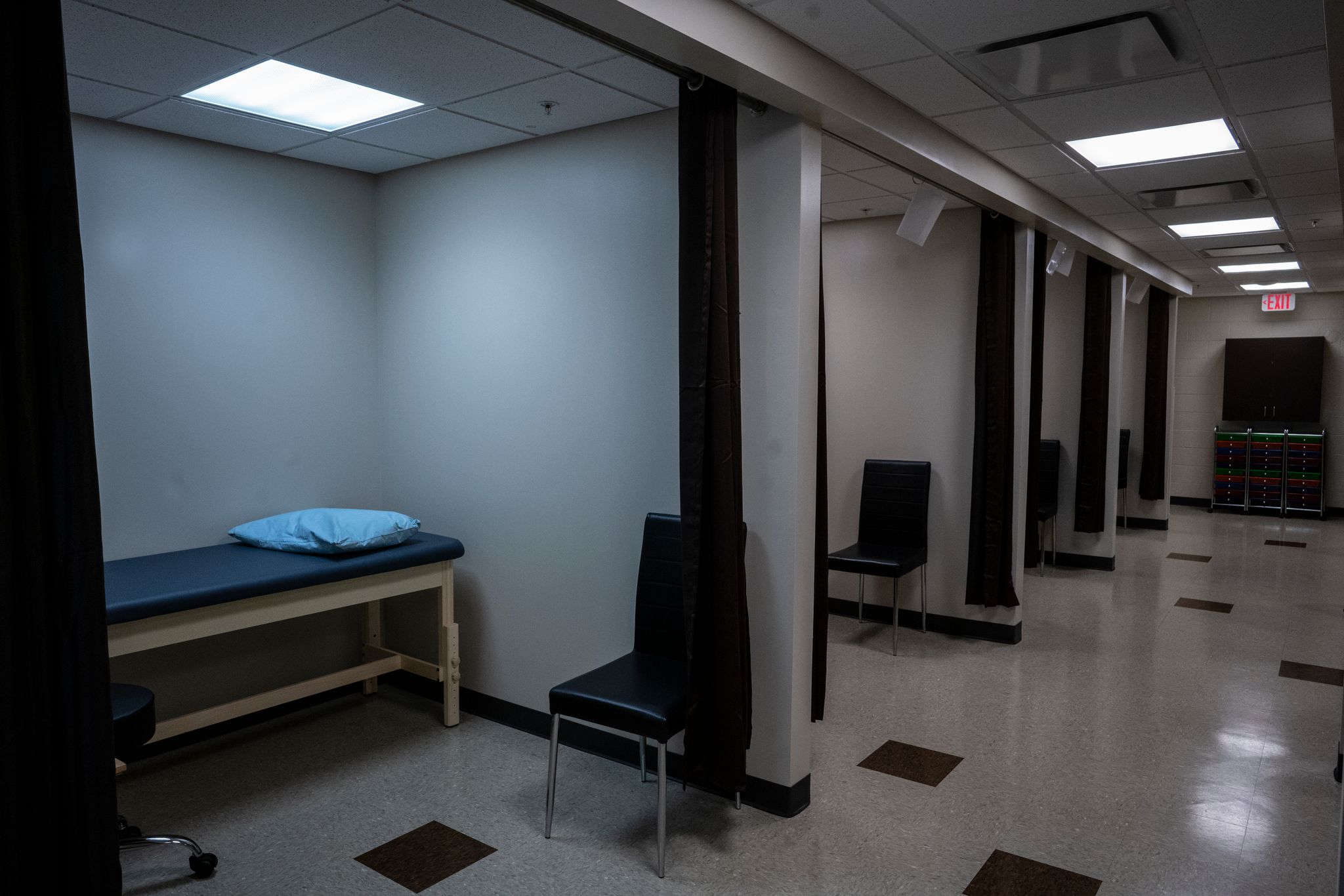 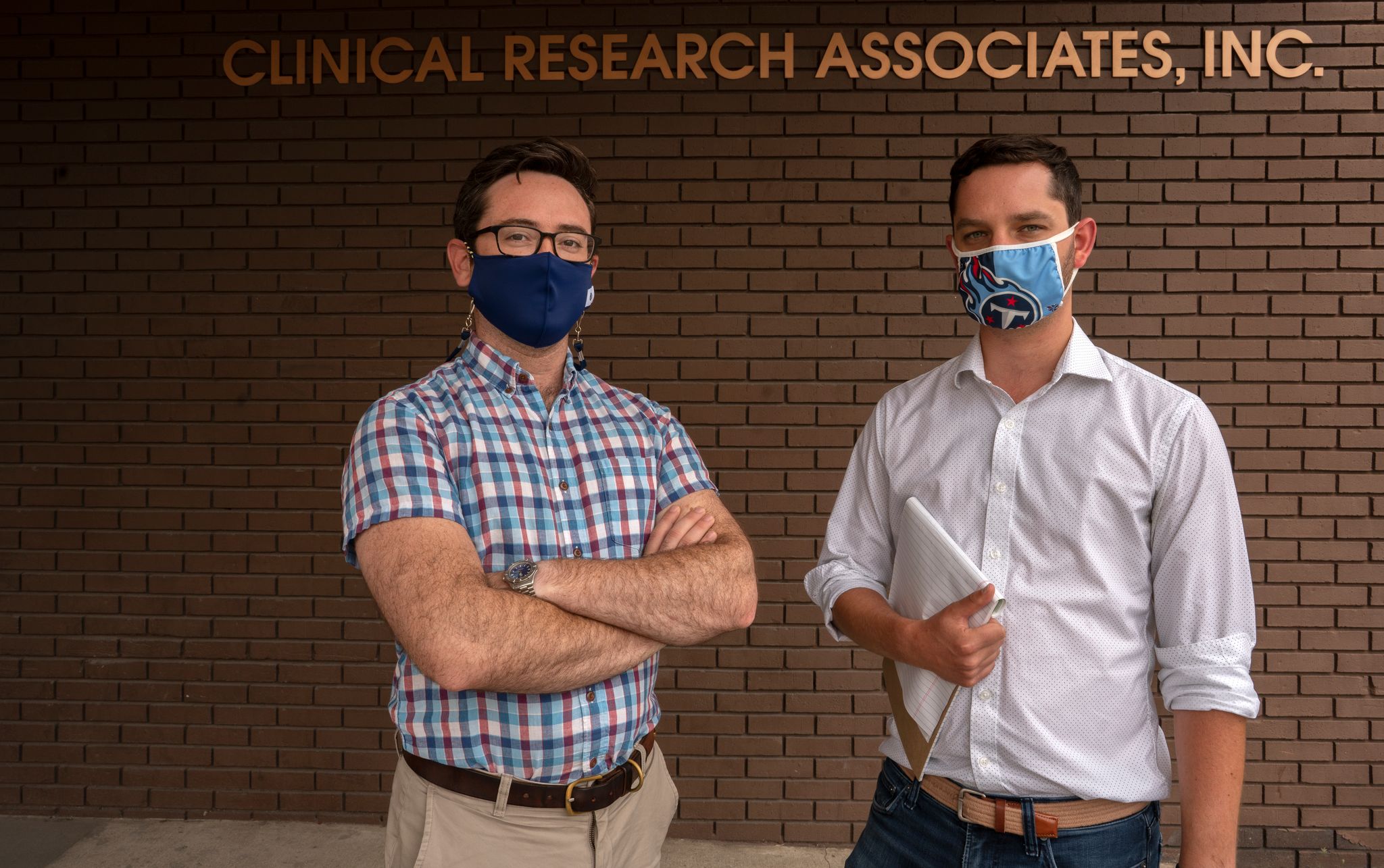 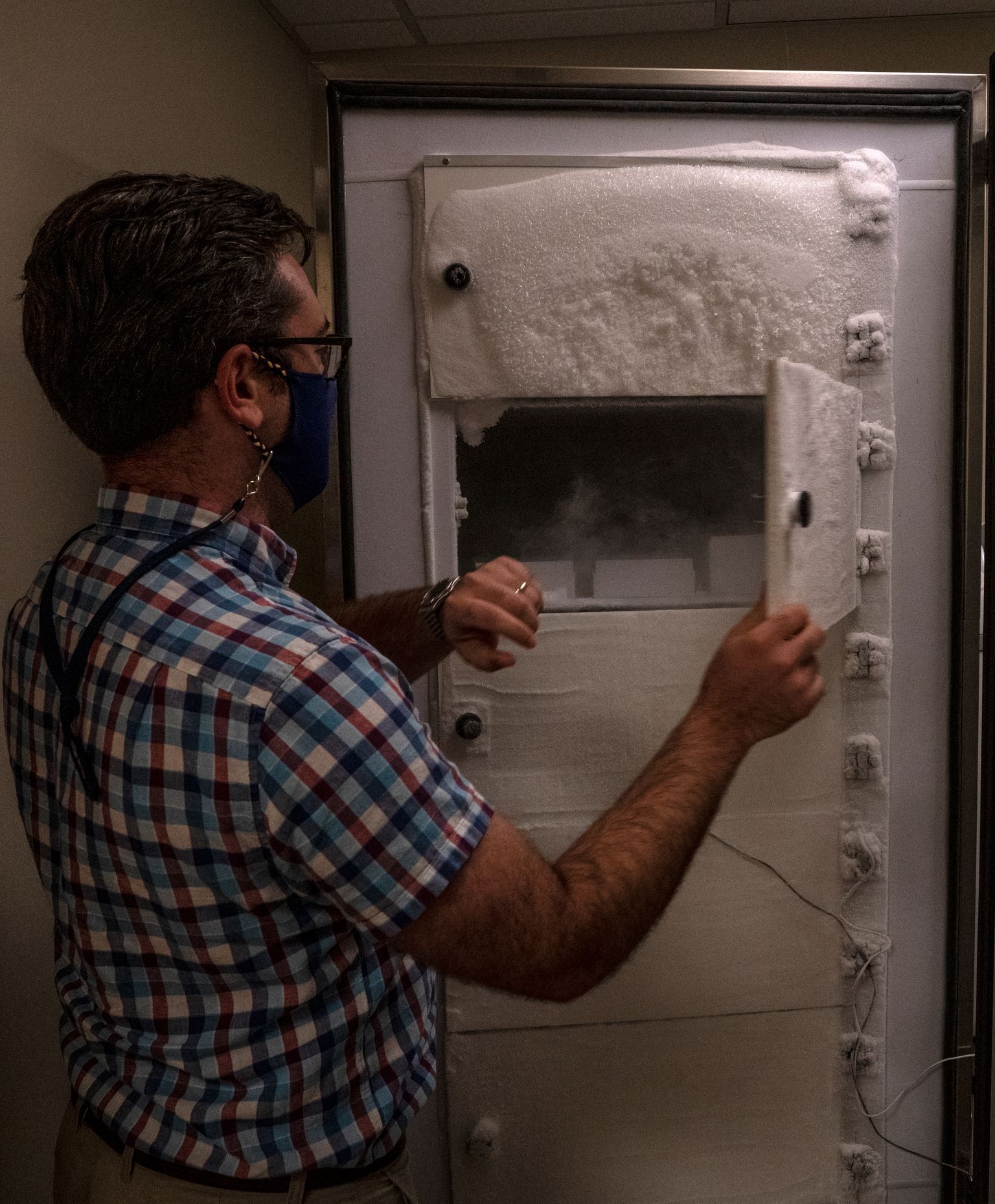 Matthew Schipani opens an icebox in which vaccine will be stored. (Photo: John Partipilo)

Despite conducting over 700 clinical trials, including 49 vaccines, during its 31-year history, Clinical Research Associates has never participated in a trial with as much intense public interest as the COVID-19 vaccine.

The Nashville firm is partnering with two pharmaceutical companies on COVID-19 vaccine trials – AstraZeneca and Pfizer.

Working on two trials simultaneously has begun a sprint to identify approximately 4,000 volunteers to participate. Clinical Research Associates has entered into an initial partnership with the Metro Department of Health, though details still need to be worked out and the Metro Council must approve the deal.

Clinical Research Associates President and CEO Linda Schipani said her firm was sought out by the pharmaceutical giants for two reasons: its track record conducting safe, efficient trials and because its base of operation is in Nashville. As Health Department Director Dr. Michael Caldwell pointed out last month, a silver lining for Nashville seeing a high number of cases is that it made the city a desirable location for the vaccine trials.

Schipani said it’s especially vital to find a diverse group of volunteers in terms of age and race.

“Most of these trials are wanting a lot of diversity in their trials,” Schipani said. “As you know, African Americans have been adversely affected by COVID particularly. We are wanting a very balanced population for these studies.”

Clinical Research Associates is currently in the recruitment phase of getting the word out about the trial and screening volunteers. Because of the increased workload, Schipani said the firm was forced to hire more staff and is still looking to hire data entry positions.

If we do find a vaccine that works well, it will change the face of what we're dealing with right now. It's humbling. It's somewhat stressful and scary at the same time because I think that all of us have been affected in so many different ways.

Schipani’s pitch for volunteers interested in participating in the trial is rather grandiose. She says volunteers have the opportunity “to impact the world.”

“I think the vaccines themselves have already been tested on humans and we have some background data. The (U.S. Food and Drug Administration) has approved the protocols and are closely monitoring the studies,” Schipani said in response to whether volunteers can feel safe about the Phase III trials. “There’s a lot of regulatory processes in place. And of course, our number one goal is protection of human subjects. So we want to make sure that what we are doing certainly, the benefits outweigh the risks in research.

“If they want to be a part of the solution, this is going to be a once-in-a-lifetime opportunity. I don’t think people ordinarily have the opportunity to impact the world.”

Schipani said the gravity of the trials, and how essential a successful vaccine will be to helping life return close to pre-pandemic, is not lost on her.

“Of course it’s awesome that we were included and we want to be very involved in this process because I feel like we want to be a part of the solution,” Schipani said. “This vaccine, if we do find a vaccine that works well, it will change the face of what we’re dealing with right now. It’s humbling. It’s somewhat stressful and scary at the same time because i think that all of us have been affected in so many different ways.”

She said the trial will have a followup period of two years, which outlines a long process that would stretch well past the November election.

The plan is to launch the production process for the various vaccines that have progressed through initial research phases so that when a specific vaccine receives final approval from the FDA, the distribution process will be ready to launch.

But even the unprecedented nature of Operation Warp Speed is slowed down by the normal guard rails that accompany vaccine trials, which require time to be sure they work.

“That’s an interesting question that all of us who have been in research for a long time are asking,” Schipani said in response to how a two-year trial period meshes with the goal of distributing the vaccine this calendar year. How can that possibly be that we’re going to get a vaccine that quickly. I think Dr. Anthony Fauci has some reservations and the head of the FDA (Dr. Stephen Hahn) is saying he is not going to cut any corners. We’re all working very diligently and quickly to try to get the data.”