About 10 percent of Metro Nashville Public Schools students aren’t attending virtual school each day according to numbers released on Wednesday by the district.

That’s well below the district’s goal of 95 percent daily attendance. About 2 percent of students – 1,456 children overall – haven’t logged into schoology at all.

The numbers come with caveats. The district hasn’t yet withdrawn students who never attended, an MNPS spokesman said. Once those students are subtracted, the average daily attendance rate of 90 percent will rise.

“Students are automatically enrolled in school grade after grade, so every year, MNPS must withdraw students who do not attend because they have moved or attended another school without informing the district,” spokesman Sean Braisted said.

There are approximately 86,000 students enrolled in Nashville’s public schools.

The district is going to remain in virtual mode through fall break the first week in October. Braisted said attendance specialists will use the attendance data to launch an outreach campaign.

“Every year, including now with virtual learning, our school attendance teams, Enrollment Center division, and Attendance Services division will use attendance data to work with schools to target outreach to students and families who are enrolled but have not yet attended or engaged,” Braisted said.

Nashville school board member Rachael Anne Elrod said she has requested more detailed data about student performance during virtual school, including the engagement rate among the 90 percent who did attend, trends among the 10 percent who do not attend, kindergarten enrollment numbers and prioritization of outreach among the 2 percent who have never attended. 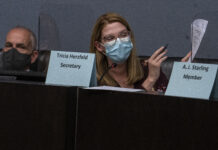 A snapshot of July’s rising numbers of COVID-19 cases in Nashville...