I didn’t realize Sunday was “National Coming Out Day” until I logged into Facebook and began reading my friends’ stories of how they confronted their sexuality and told their family and friends they weren’t straight.

A few, from people who always knew their sexual orientation and were comfortable with it, were triumphant. Most had more than a note of poignancy, like the woman who hasn’t spoken to her father in 15 years, after he told her that her girlfriends weren’t welcome in his house. Or the man who grew up in rural Tennessee, a strong Christian trying to reconcile his church with his feelings.

National Coming Out Day was first celebrated in 1988, on the premise that homophobia thrives in silence and the most basic form of activism is to live life as an openly gay or lesbian person.

I can’t help but think of one of my best friends, a man with whom I’ve been close since high school. Raised in the Southern Baptist church with conservative parents, he struggled with his sexuality until his mid-20s, dating women and trying to convince himself there was nothing “wrong” with him.

For him, a move to a larger city with a diverse and welcoming gay population, therapy and supportive friends gave him the courage he needed to become comfortable with himself. He had to come out of his own personal closet before he could do so publicly.

I’m not LGBTQ. I’ve always been comfortable with who I am, including with my gender and sexuality. But anyone with empathy should be able to feel the pain of what it must be like to grow up feeling different, of wondering if you will find love, if you can share that love openly and if your government will give you the same privileges as straight people.

Recent actions regarding the U.S. Supreme Court casts a pall over National Coming Out Day this year. Last week, Justices Samuel Alito and Clarence Thomas spoke out against Obergefell v. Hodges, the Supreme Court case that made same-sex marraige legal nationally. Thomas wrote the decision impinged on religious liberties, saying anyone who believes marriage is between one man and one woman can be branded bigots.

U.S. Supreme Court nominee Amy Coney Barrett’s suggestion that laws on same sex marriage should be left to individual states would be a disaster for LGBTQ Tennesseans.

Even more concerning for LGBTQ advocates in many states is President Donald Trump’s nomination of Amy Coney Barrett to the U.S. Supreme Court. As Jim Obergefell, the plaintiff in Obergefell v. Hodges wrote in a Washington Post column Oct. 8, Barrett has “strongly suggested laws on marriage equality should be left to state legislators, not the federal courts.”

That would be a disaster for LGBTQ Tennesseans, whose only gay agenda is to live with dignity, to be able to marry and undertake such mundane tasks as filing taxes jointly.

The Tennessee General Assembly has earned a reputation for annually filing some of the most restrictive LGBTQ laws in the nation.

Among the bills in the Tennessee General Assembly up for debate in 2020 were House Bill 1369 and Senate Bill 1282, otherwise known as the Tennessee Natural Marriage Defense Act. The bill, as written, states that Obergefell v. Hodges is unauthoritative and void and gives county clerks the authority to deny marriage licenses for same sex marriages.

HB 2410/SB 2625 defines what marriage is, at least by Tennessee legislative standards. The bill summary provides for enforcement of  “policies that respect and endorse a secular marriage between a man and a woman,” then goes on with a lot of hooey about the definition of man and woman. (“One person born male, one person born female.”)

In 2014, I attended my best friend’s wedding. The event was the most joyous of that year. I cried when I gave a wedding toast, after reading a portion of the Massachusetts Supreme Court’s ruling on marriage equality, for truly, there’s no greater joy than witnessing a friend be able to share his love openly and enjoy the privilege of marriage so long denied.

There’s no reason to believe Barrett will change her mind when it comes to same sex marriage and a more conservative court endangers that right.

As I think of all my friends — and at this point, surely we all have family or friends who are LGBTQ — I rely on the words of the Massachusetts Supreme Court in its 2003 ruling, the same ones I read at my friends’ wedding celebration, and the ones I deeply hope conservative members of the Supreme Court will seriously consider:

“Civil marriage is at once a deeply personal commitment to another human being and a highly public celebration of the ideals of mutuality, companionship, intimacy, fidelity, and family.

“It is undoubtedly for these concrete reasons, as well as for its intimately personal significance, that civil marriage has long been termed a ‘“civil right.’” 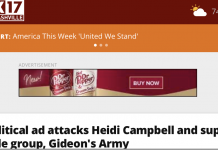