WASHINGTON — U.S. Sen. Marsha Blackburn, one of two Republican women on the Senate Judiciary Committee, used her time at the end of Tuesday’s Supreme Court confirmation hearing to blast liberal critics for what she described as unfair treatment of female conservative nominees like Amy Coney Barrett.

Blackburn, who has been a staunch defender of Barrett during the lead-up to this week’s hearings, decried Democrats for criticizing Republicans for not nominating enough women to serve as judges, but then attacking a qualified nominee like Barrett when a woman is tapped for a key vacancy.

“They attack you for not fitting into the paradigm of the left, because you’re pro-life, pro-family, and pro-religion,” Blackburn said.

Blackburn’s role is important for Republicans, who placed her and Sen. Joni Ernst of Iowa on the Judiciary Committee following the rocky confirmation hearings for Justice Brett Kavanaugh in 2018. And it’s one that she has embraced.

Days after Barrett was tapped as President Donald Trump’s nominee to the Supreme Court, Blackburn and six of her female Republican colleagues gathered to rally around a fellow conservative woman.

One after another at a Capitol news conference, they stepped to the microphone to praise Barrett not only as a talented legal scholar, but also someone they could relate to and connect with on a personal level: another working mom.

In listing Barrett’s qualifications at the press conference, Blackburn lauded her as someone with “a strong intellect,” “an appreciation for the Constitution,” and who is “a mom who takes her seven children to church every week.”

“We are so pleased to have a woman who is so accomplished, who is widely applauded by her colleagues whether they are coming from the left or the right,” Blackburn told reporters.

Barrett, 48, and a judge on the 7th Circuit Court of Appeals, has appeared before the Judiciary Committee this week on her nomination to replace the late Justice Ruth Bader Ginsburg.

Democrats have argued that Barrett represents a swing vote on the high court to overturn the Affordable Care Act and harm health care for millions of Americans. A challenge to the law is scheduled to be argued in November.

“Americans deserve to have their voices heard when it comes to protecting their health care, whether they’re Democrats, Independents or Republicans,” Sen. Amy Klobuchar, a Minnesota Democrat and another member of Judiciary, said in the Weekly Democratic Address the weekend before the hearings. “And that’s why we should not be holding these hearings in the middle of a pandemic just weeks before the American public chooses the next president. The winner of that election should choose the Court nominee.”

The Judiciary panel’s demographics have shifted on the Republican side since the last time it was considering a nominee to the nation’s top court. There were no GOP women on Judiciary in 2018, when Kavanaugh was nominated—and there never had been.

At the time, with four Democratic women serving on Judiciary, an imbalance was particularly stark as the committee investigated charges of sexual assault against Kavanaugh.

At the beginning of the next congressional session, just months after Kavanaugh’s hearing, Blackburn and Ernst were added to the Judiciary roster.

Blackburn made history in 2018 when she was elected as Tennessee’s first female U.S. senator after serving eight terms in the House. In that chamber, she staked out a reputation as a vocal foe of abortion, and conservative groups cheered her addition to the Judiciary panel following her Senate win.

“It was very wise of Republicans to request Senator Blackburn and Senator Ernst join the committee,” said Penny Nance, president and CEO of Concerned Women of America, a conservative Christian group supporting Barrett’s nomination. “It was a mistake that in the past there were no Republican women on the committee.”

After Barrett’s nomination, Blackburn became one of the judge’s major promoters.

In TV appearances, op-eds and social media posts, the senator defended the appeals court justice’s qualifications, citing her status as a graduate of Rhodes College in Memphis and her experience clerking for former Justice Antonin Scalia, also a devout Catholic and legal hero among conservatives.

“It is so discouraging to me to see groups on the left say we want diversity, but let that diversity come from a woman who is on the political right, and their heads explode,” Blackburn said Tuesday.

Other female senators at that recent GOP news conference on Barrett also referenced Barrett’s gender, emphasizing a significance in replacing Ginsburg with another woman.

Absent from that event were the two other female GOP senators, Susan Collins of Maine and Lisa Murkowski of Alaska. Both have opposed proceeding with a Supreme Court confirmation so close to an election. 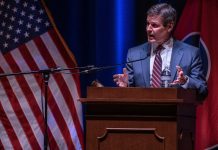