Just 12 days before election day and with millions of people having already voted, Trump squared off against Democratic challenger Joe Biden in the final presidential debate at Belmont University.

According to Real Clear Politics’ polling average, Biden led Trump by 7.9 points nationally and by 4.6 points in the swing states. The FiveThirtyEight election forecast gave Biden an 87 percent chance of winning heading into the debate.

Analysts have been quick to point out that Democrat Hillary Clinton also was ahead in the polls at this point in 2016, though not by Biden’s decisive margin. And, unlike 2016, there are fewer undecided voters in the campaign’s closing days.

The problem for Trump was the first and only other debate sent his campaign in the wrong direction according to the polls. Biden built a lead of more than 10 points following the combustible first debate, according to most national polls. That lead remained steady after Trump contracted COVID-19 and the second debate was subsequently called off.

To stem the tide, Trump entered the debate determined to make a larger issue out of questions surrounding Biden’s son Hunter Biden. A New York Post story last week created a swirl of questions about whether Hunter Biden brokered meetings between international business interests and his father while Joe Biden was the vice president.

Trump said Biden had explaining to do about the business dealings of his family members and the apparent references to the former vice president in text messages between his son and a business associate.

Biden was emphatic that he never had business dealings in Russia or China, and pointed to the 22 years of tax returns he had released. Biden blasted Trump for being too cozy with Russia President Vladimir Putin. Biden pointed out Trump hasn’t criticized Putin for approving bounties on U.S. soldiers or trying to destabilize NATO.

Biden accused the president of failing to stand up to Russia following U.S. intelligence reports that Russian operatives have interfered in American elections.

“I don’t know why he doesn’t do it,” Biden said. “But it’s worth asking the question. Why isn’t that being done. Any country that interferes with us will in fact pay the price, because they’re affecting our sovereignty.”

After taking on criticism for a rude, interrupting first debate performance, Trump began the final debate by striking a more somber, serious tone. The first debate topic was the COVID-19 pandemic, which Trump blamed on China.

Biden scored one of the debate’s more memorable lines when he said, responding to Trump’s criticism that he’ll reinstitute unnecessary government shutdowns to combat the pandemic, “I won’t shut down the country, I’ll shut down the virus.”

“I literally just threw my phone. That man said he’s the least racist person in the room to a Black woman moderator. He didn’t say he wasn’t racist, just the least racist,” tweeted Charlane Oliver, co-executive director of The Equity Alliance, a Nashville-based voting rights organization.

“VP Biden the bill you passed put tens of thousands of black men behind bars because of small amounts of drugs,” wrote Faison.

It was the second time Belmont, the small, private university in the heart of Nashville, hosted a presidential debate. Belmont hosted a debate between future President Barack Obama and Sen. John McCain in 2008.

But, this time there was less of a festival atmosphere because of safety protocols due to the COVID-19 pandemic. Media access was limited, the debate hall was mostly empty because of healthcare safety measures. Nashville-based HCA partnered with the Cleveland Clinic to oversee the COVID-19 protocols to keep the candidates and attendees safe. Outside, Metro Nashville Police officers urged spectators to wear masks.

Despite the restrictions, protesters still made their presence felt, gathering at intersections near the Curb Event Center debate hall in the hours leading up to the event. Women wore outfits from the Handmaid’s Tale to protest the regulation of reproductive rights during Trump’s administration. Voters supporting both candidates waved signs as cars drove by on Wedgewood Avenue.

Gage held up a Trump flag as his wife Deanne explained to the Tennessee Lookout they drove to Belmont from West Tennessee to back the president because “(Trump) supports Christians. He supports the First and Second Amendment. We think he was sent from God.” Neither Gage nor Deanne wanted to provide their last name.

Vernon Strong, of Lafayette, said he took the afternoon off work to see Trump. It’s the fourth Trump event Strong has attended, including the June rally Trump held in Tulsa.

“Biden will ruin America,” said Strong, who sported a Tennessee Titans cap and Trump 2020 mask. “If Biden gets elected, my check will go down. Gas will be over $4 a gallon.”

If Biden gets elected, summed up Strong, “he won’t last six months.” 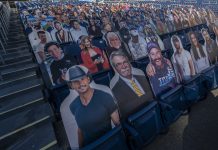 How Nashville will pay for its sports venues amid pandemic