Miranda McDonald headed to an East Nashville Kroger store Monday to stock up on two weeks’ worth of groceries for herself and her mother, topped up the car’s gas tank and prepared — if need be — to hunker down at home in the days and weeks to follow one of the most volatile elections in recent U.S. history.

In a year marked by bursts of civil strife around the nation, the 29-year-old graduate student said she doesn’t know what to expect on Election Day and isn’t taking any chances.

“I’m definitely a little worried,” McDonald said. “Civil unrest is not something America is new to, especially in 2020. I think everyone, regardless of race, gender or sexual orientation, has at least an ounce of worry and have their guard up.”

Filling up my car today and going to the grocery store today. I am TERRIFIED about tomorrow night and I want to prepare to be in the house at least for the next two weeks. Yes, I have faith and yes, I believe in God, but I am PETRIFIED of what’s going to happen.

State and local public safety officials say they know of no planned disruptions or protests on Election Day.

“At this time, the Tennessee Department of Safety and Homeland Security is not aware of any planned disturbances to Election Day in Tennessee,” said Wes Moster, a spokesman. “As always, however, we remain vigilant and prepared to assist local, state, and federal partners as we’re requested to do so.”

“Our advice to citizens on Election Day would be the same we offer any other day: If you see something suspicious, report it to local law enforcement as soon as possible.”

The State Emergency Operations Center, activated since March 3 tornadoes swept through Middle and East Tennessee, will “continue to support the needs of local and State partners as needed through the November 3rd election,” spokesman Dean Flener said Monday.

In Nashville, Metro Police will have a team of officers in each of its eight precincts dedicated to responding to any problems, spokesman Don Aaron said.  The police will station representatives at an FBI command post to “facilitate the flow of information concerning any issues.”

Nashville police will also have an “enhanced presence downtown Tuesday evening in the event of any disruption(s),” Aaron said via email.

In some states that have seen outbursts of violence this year, and in battleground states that are key to any potential presidential victory — Tennessee is not one of them — officials have ordered the National Guard to be on standby to respond to any unrest or violence.

The National Guard in Tennessee is thus far focused on providing limited expert IT assistance to county election officials to spot potential cyber attacks, but has not been asked to stand by in case of violence.

A spokesman for Gov. Bill Lee did not respond to emailed questions about whether he has considered calling on the Guard should unrest occur on or after Election Day.

Across the country, many remain on edge.

A USA Today/Suffolk poll found three in 4 voters are concerned about the possibility of Election Day violence.

In Murfreesboro retired mechanical engineer Taylor Massey, 66, said he is apprehensive heading into Tuesday’s election. He doesn’t typically vote early but did this year specifically to avoid any potential conflicts at polling locations.

“I don’t know what the hell is going to happen,” Massey said. “I’m not saying something will, but it’d be foolish to think there isn’t a possibility of something, somewhere going south. And I don’t want to be there when it does.”

Massey is the only support person that his 69-year-old ex-wife, who lives in a local nursing home and suffers dementia, has in her life, he said. That makes him extra cautious about his own safety. He doesn’t want her to be alone, he said.

“This election is important,” Massey said. “Whatever happens with the votes is going to happen and I just hope people remain calm. I’m going to spend the day in front of my TV with the doors locked with my cats.” 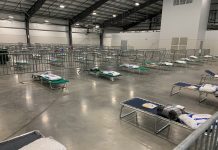 Best of the week: @tnnaterau examines how Nashville will pay for its sports arena as a pandemic has closed down revenue-generating events. https://t.co/atrdhzFZPO

Some Tennessee residents hunker down on Election Day, worried about strife