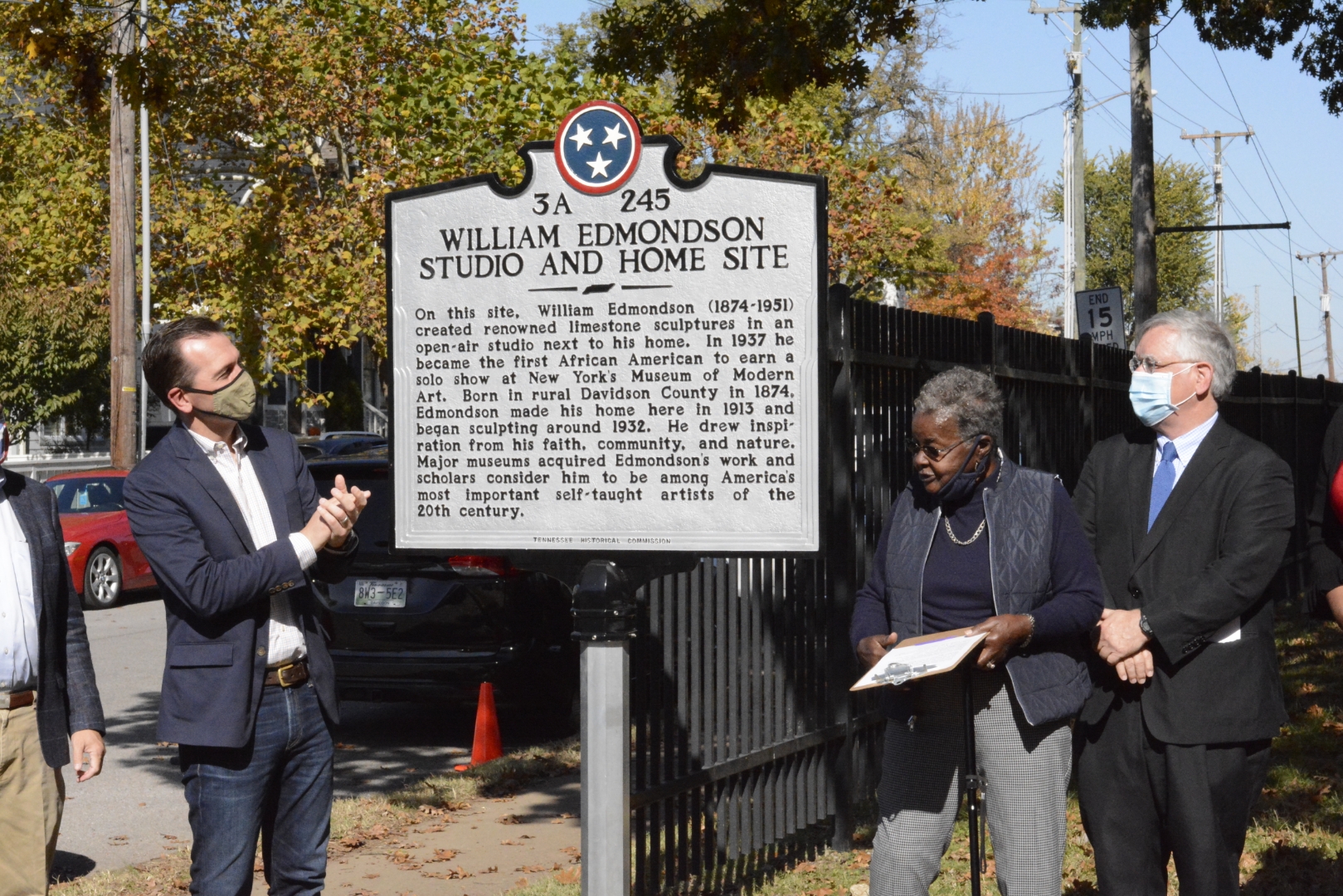 A Tennessee artist largely ignored in his own neighborhood now has a historical marker to solidify his legacy.

William Edmondson, the first Black artist to have his own exhibit at the Museum of Modern Art (MOMA), was commemorated Saturday with a historical marker near the corner of 14th Avenue, S. and Wade Avenue in Edgehill. Behind the marker is the now-shuttered Murrell Elementary School and a community park often frequented by families. Although this is all that’s left of Edmondson’s home and workshop, advocates believe the occasion cemented his legacy.

“Mr. Will Edmondson was a Nashville treasure and I am pleased that the residents are paying a lasting tribute to him by erecting this historic marker,” said Sen. Brenda Gilmore.

Edgehill has come a long way since Edmondson’s time there. Since the start of the Civil War, the community was segregated, and it was here that Edmondson lived with his family. Born to former slaves on a plantation, Edmondson had worked odd jobs to support himself and his extended family. On the cusp of the Great Depression, Edmondson lost his job as a janitor and is said to have received religious conversion. At 57 years old, Edmondson sat down in his backyard and began sculpting.

“It’s peculiar because he didn’t spend a day in art school. He was self taught, and this was something that he did at the end of his life,” said Dr. Learotha Williams, a history professor at Tennessee State University.

Edmondson’s art had biblical connotations. Using material that others considered trash, he carved headstones referencing the bible, nature or historical figures important to the Black community.

“He’s taking stones that the builder rejected, He’s making something beautiful out of them. Stuff that we wouldn’t take two minutes to consider … He’s making beautiful things for people at the lowest point in their lives, because they’re saying goodbye to a loved one,” said Williams.

Edmondson was discovered by Nashvillian figures Sidney Mttron Hirsch, Louis Dahl-Wolf and Alfred Starr. Dahl-Wolf photographed Edmondson and his work and brought the photographs to the attention of New York officials. As his fame grew, Edmondson made his way to having a solo exhibition at the MOMA, alongside Salvador Dali and Picasso.

“He’s one of the most influential self-taught artists in the 20th century,” said Mark Schlicher, a Nashville artist and filmmaker.

Edmondson never had another show in his lifetime. He stopped carving around 1948 as his health waned. He died in 1951. With time, he was largely forgotten in Nashville outside of the community of art collectors. As quickly as Edmondson’s career rose, Edmondson’s legacy was all but gone.

Schlicher spent several years trying to find information about Edmondson’s life.  Then in 2018, when Nashville was dealing with a budget crisis, Schlicher “learned by chance” that then-mayor David Briley planned to sell several properties. On paper, the area looked like an unused school property, but in “in reality it was a beloved neighborhood park by the community,” and the site of Edmondson’s workshop, said Schlicher.

When Edmondson died in the 1950s, his property was sold to the city and torn down. A school was built in its place, and because of this the area had remained largely unscathed, but by this point, Edmondson was mostly gone from history. Schlicher spoke with people who had gone to the elementary school, but no one had heard of Edmondson.

“Generations of people went to that school and never learned about him,” said Schlicher.

The following weeks, Schlicher spent his time contacting community leaders and formed protests to save the park.

“We were a very ragtag group,” he said.

Schlicher argued to members of Metro Council that paving over the area would be “taking away African-American history.” The council voted almost unanimously to keep the area untouched,but this was just the first step, according to Schlicher. The next step was to make sure Edmondson’s legacy was permanently conserved.

“We need to pay attention to history that is in the margins because at the end of the day it reveals our true character,” said Schlicher.

Today, no one knows the exact location of where Edmondson is buried, since the record of his wooden casket was destroyed in a fire, but Nashville officials said conserving what was formerly his home is a permanent reminder of his legacy.

Edgehill is experiencing gentrification, but Schlicher hopes the community will remain a healthy, diverse neighborhood and will continue to educate future generations about Edmondson.

“There are changes that are afoot, but we hope that it’s not a change that displaces and washes away the neighborhood or the memory of Edmondson,” said Schlicher.

Today, a large collection of Edmondson’s work is located at Cheekwood Botanical Gardens.