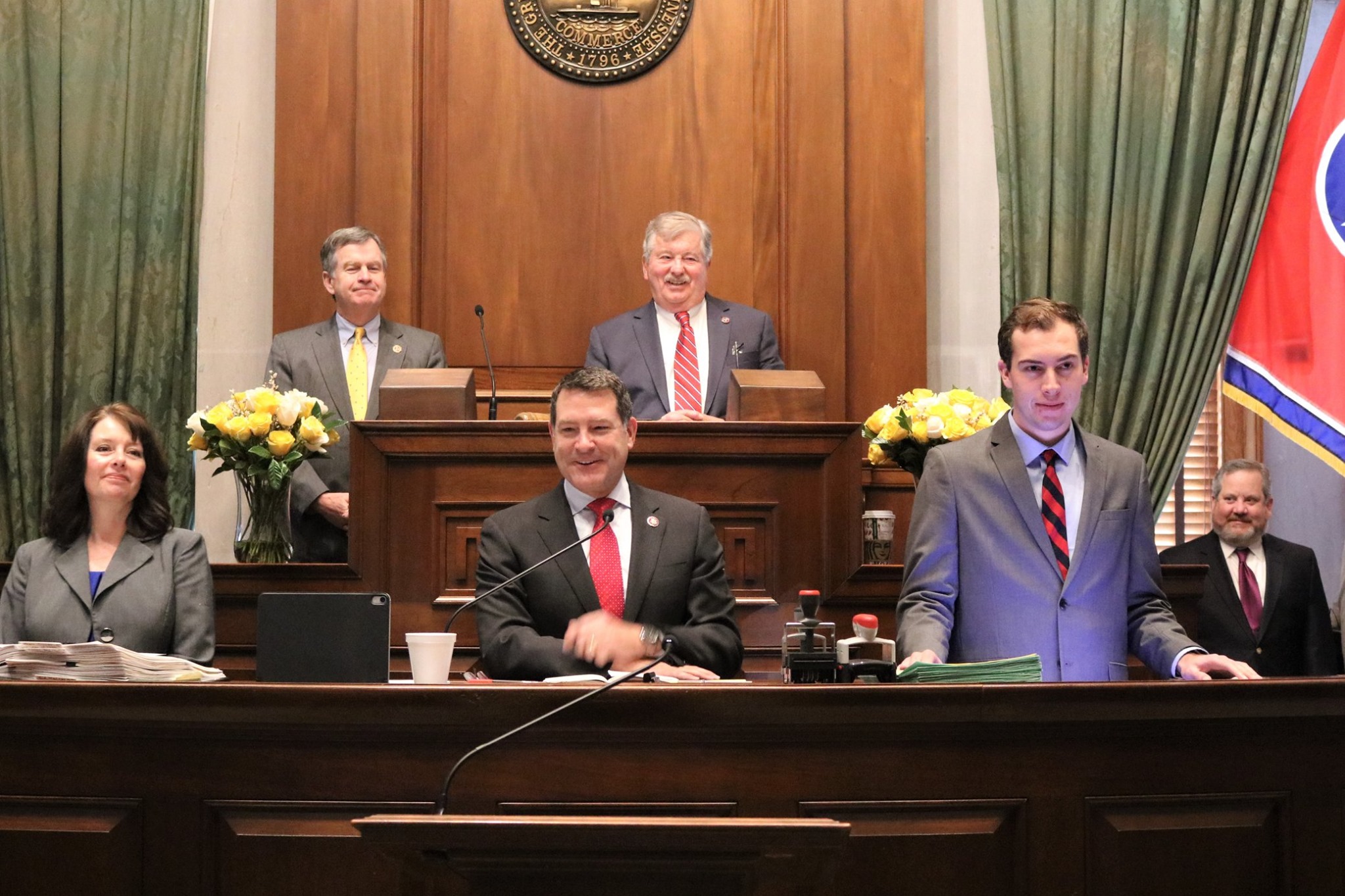 Senate Republicans joined a chorus of GOP leaders standing “absolutely and unequivocally” with President Donald Trump in his challenge of the 2020 election, saying it is “far from over,” even though most media outlets have “called” it in favor of former Vice President Joe Biden.

Issued this week and signed by Lt. Gov. Randy McNally and 22 other Senate Republicans, the caucus’s letter refers to alleged problems in battleground states such as Michigan, Georgia, Nevada and Pennsylvania, and says, “Until these irregularities have been thoroughly investigated and court appeals have been exhausted, no winner should be declared.”

The letter makes note of the large number of mail-in ballots counted in this year’s vote and points toward the disputed presidential election between George W. Bush and Al Gore that required a U.S. Supreme Court decision to decide the outcome of the Florida vote, which determined the winner of the Electoral College in 2000.

Asked if the letter is politically risky, McNally spokesman Adam Kleinheider said Wednesday, “The letter speaks for itself. Regardless of who is ultimately inaugurated on Jan. 20, Lt. Gov. McNally believes that due to the closeness of election and the unprecedented number of mail-in ballots, it is important that the full electoral process be played out before a winner is declared. It’s not about politics. It’s about election integrity.”

With President Trump winning more than 60% of the Tennessee vote, Senate Majority Leader Jack Johnson said the caucus is not walking out on a political limb.

“I don’t see any political risk. In fact, I would argue quite the contrary,” Johnson said. “If there is a malfeasance or fraud that’s taken place in some of these other states, as has been alleged … then the people who are perpetrating that fraud in these other states are disenfranchising Tennessee voters, because our election was held fairly.”

The Franklin Republican said he believes the caucus “owes it” to the state’s voters to make sure their votes are “not watered down due to any impropriety.”

Sen. Ferrell Haile, a Gallatin Republican who signed the letter, believes the president should pursue every angle, though he doesn’t think the outcome will change.

“The intent of that, from my perspective, is that we need to pursue the discrepancies that are out there and get that cleared up, where we don’t repeat those,” Haile said.

The outcome could change in one state, but it isn’t likely to bring a different winner overall, Haile added.

Sen. Jon Lundberg, a Kingsport Republican who also signed the letter, said the discrepancies exist and questions about them need to be resolved.

Lundberg declined to say whether he believes the outcome will change once all challenges are exhausted, contending it should be left up to secretaries of state.

Three senators, Todd Gardenhire, Brian Kelsey and Richard Briggs, did not sign the letter. Briggs reportedly said he declined to sign it because he is unaware of any fraudulent activity that could swing the election to Trump.

With 98% of the vote counted, Biden is reported to be ahead of Trump by 47,613 votes in Pennsylvania, where 20 election votes are in the offing. The Trump campaign filed suit there to block certification of the election, contending its vote observers weren’t allowed to get close enough to vote counters in blue counties to ensure the tally was done correctly. In addition, the president and Republicans requested the Supreme Court throw out mail-in ballots that arrived three days after the Nov. 3 vote but were sent in prior to Election Day, even though those weren’t part of the current margin.

A recount is expected to be made in Georgia, where Biden leads by 12,293 with 98% of the vote counted.

The Trump campaign tried unsuccessfully to sue in Michigan where Biden is ahead by 148,645 with 98% of the vote in. Several other legal challenges have failed, as well, and the Associated Press reported international election monitors have said the election was held correctly.

Gov. Bill Lee, U.S. Sen. Marsha Blackburn and Sen.-elect Bill Hagerty of Tennessee, all Republicans, are backing Trump’s challenges, as well. In contrast, former Republican Sen. Bob Corker and former President George W. Bush are calling for a smooth transition and asking for the president to respect the election outcome, in which Biden has more than the necessary 270 electoral votes already and could wind up with more than 300.

Sen. Jeff Yarbro, a Nashville Democrat who leads the Senate Democratic Caucus, was disappointed to see his Republican colleagues take a stand questioning the legitimacy of the election.

“This is a manufactured controversy where the president has no path to victory,” Yarbro said. “The people get to decide who their president is, and they picked Joe Biden, and the failure to concede when the outcome is clear is an embarrassment to the country.”

Yarbro said he hopes the Republican Caucus will take a different stance as President Trump’s loss becomes “clearer and clearer.”

No credible reports of voting irregularities that could turn the outcome toward Trump have been turned up, and the president has already lost legal challenges in at least seven states, Yarbro pointed out.

“Even if they were in court, the margins are such that they can’t be overcome,” said Yarbro, who has been involved in a recount. “To pretend otherwise is a charade.”

This year’s election differs from the Bush-Gore contest in that the 2000 outcome was unclear because no winner was called in the Florida vote until the Supreme Court settled the matter. Neither side had an Electoral College majority either while the case went to court.

McNally’s spokesman, however, pointed toward several alleged irregularities, including questions about the Pennsylvania vote and a proposal for a bipartisan audit led by the Legislature in the Keystone State.

Pennsylvania Gov. Tom Wolf is opposing the audit, pointing out allegations of fraud and illegal activity have been debunked and dismissed in court.

In addition, a lawsuit filed in Wayne County, Michigan claims election workers coached people during voting, looked at ballots before processing and stopped Republican inspectors from watching the count.

Nevada state officials are investigating a case in which two ballots were allegedly cast in the names of two dead people.

Meanwhile, two Georgia Republican senators are demanding Georgia Secretary of State Brad Raffensperger, a Republican, resign because he “failed to deliver honest and transparent elections.” He has acknowledged disappointment in the election’s outcome but refused to leave office because of rankled fellow Republicans, according to reports.

Struggle for control of the U.S. Senate enters its final tense...