Drake is a Nashville native, whose career in the Metro Nashville Police Department began 32 years ago as a patrol officer. Drake replaces Chief Steve Anderson, whose retirement was unceremoniously and surprisingly announced earlier this year by Cooper’s office. Anderson held the post as chief for 10 years, but retired amid intense scrutiny surrounding how the department polices minority neighborhoods, the handling of officer-involved shootings, an external sexual harassment investigation and a strained relationship with the Community Oversight Board.

Because of Drake’s connection to Anderson, some critics said an outside hire was needed. But, Cooper said on Monday that the long hiring process showed Drake was clearly the best qualified candidate.

At his introductory press conference held remotely via the internet, Drake committed to immediate reforms including launching a new community outreach division, improving how his department responds to mental health-related calls and hiring more women and minorities. Drake also said a new memorandum of understanding would be finalized soon between the police department and the Community Oversight Board.

“I will lead with my heart by being open and accessible to the community, while connecting with people,” Drake said. “At the same time, I want officers to know that I care deeply about them, and will work to build more wellness programs and other services to help officers flourish in their careers.”

The local Fraternal Order of Police, which serves as the officers’ union, backed Drake for the job.

During the press conference, Drake said he never would have guessed when growing up in East Nashville that he would one day lead his hometown police department. In prepared remarks, he calmly listed off reforms he would pursue as he takes the helm.

“Most assuredly, these are historically critical, and some have said consequential times,” Drake said. “Never did I think as a child growing up on North Ninth Street that one day I would be a police officer, much less selected in 2020 to lead the Metro Nashville Police Department. I mention my upbringing on North Ninth Street for a reason. This is my hometown. I love this city, I really care about it.”

Drake vowed to improve transparency, focus on hiring more women and officers of color, and touted the creation of a 15-person community outreach division.

The Tennessee Lookout reported in November that Aurora, Ill. police Chief Kristen Ziman emerged as the top external candidate. Ziman was also a finalist for the Chicago police chief job earlier this year and is viewed as a rising star in the industry.

Cooper said Drake earned the job by being the best qualified.

“If you look objectively at all the requirements published from our published (job requirements) for what we felt we needed as a chief, created with the input of thousands of citizens, the chief scores best on all those factors,” Cooper said. “In the meantime, he knows our community possibly better than anybody else possibly could, and he can get to work on day one. So that is a great thing. And, as I said, I believe Chief Drake could be the chief for many cities in the United States.”

Drake vowed to improve transparency, focus on hiring more women and officers of color, and touted the creation of a 15-person community outreach division. Drake has experience in the area of community outreach having served on the department’s police athletics league, from which he launched a youth basketball program.

Perhaps the most critical challenge immediately facing Drake is dealing with the Community Oversight Board, the relatively new city agency created by voter referendum in 2018 to review incidents in which officers use force and other policing policies. Drake said a new MOU would be finalized soon.

In prepared remarks released on Monday after Drake’s hire, which was first reported by the Tennessee Lookout, the oversight board expressed an eagerness to work with Drake.

“Chief Drake has publicly acknowledged the need for cooperation between the board and MNPD, emphasizing the duty we have as public servants to carry out the will of our community,” said Andres Martinez, the board president. “The board is committed to building upon the already improved relations with MNPD since Chief Drake began serving in the interim, and will continue striving for increased accountability, transparency and trust.”

Nashville has been subject to the same criticisms as other major cities about over-policing in mostly black neighborhoods and failure to hold officers accountable after officer-involved shooting incidents. As with other cities, Nashville saw a series of protests this summer following the death of George Floyd at the hands of police officers in Minneapolis.

The policing reform movement has gained tremendous momentum in recent years, and one of the most vocal activists, Justin Jones, was critical of the hire of Drake.

“I’ve already started to see some of white Nashvillians claim this hire as a ‘new leaf’ for MNPD,” Jones said in a tweet. “But let’s be clear— simply putting a Black face as the head of the police department won’t remedy the systemic racism at the root of this institution. We need more than cosmetic change.”

Metro Councilman Bob Mendes said that in order for the police department to achieve change, it will take the commitments of Drake and Cooper.

“I welcome Chief Drake,” Mendes said. “For Nashville to become a national model for modern policing, both Chief Drake and Mayor Cooper will have to remain engaged with the entire community.” 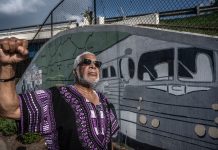