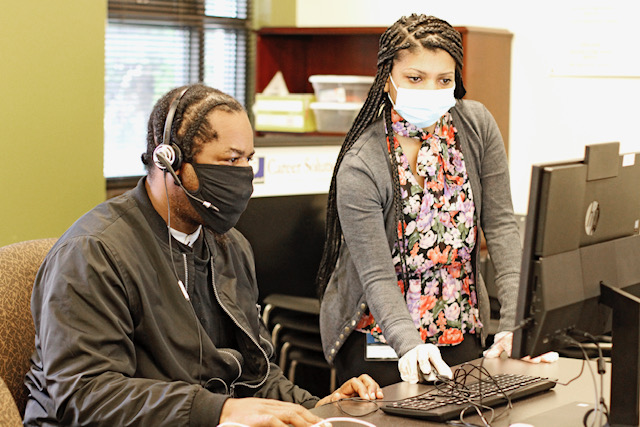 At Gap Inc.’s fulfillment center in Gallatin, new workers earn a $500 bonus if they stay on the job three months. Amazon has been offering a $1,000 signing bonus in Lebanon. At FedEx, workers at a Memphis hub can earn $18 an hour.

“There are plenty of positions out there,” George Carlson, workforce development director at Goodwill Industries of Middle Tennessee said, pointing to demand from online retailers. “For the positions for the warehouse, (wages) are actually going up.”

COVID-19 has prompted massive layoffs across Tennessee, but the surging e-commerce sector is hiring up. Even with the state’s unemployment rates more than double that of last year, the heavy demand in distribution and fulfillment is bolstering pay for those frontline workers.

Wonolo, an on-demand hiring platform based in San Francisco and Nashville, reported a 5% pay increase in Tennessee this holiday season, with average hourly wages climbing to $13.78 from $13.08. Nationally, average pay for Wonolo hires, which typically work in retail, e-commerce and fulfillment, has jumped 16% to $14.18 an hour.

In a typical economic downturn, workers would lack an ability to demand a raise because they have few job prospects, said William Fox, University of Tennessee economics professor. But in 2020, concerns about contracting the virus and challenges related to child care are making some workers more reticent to return to the workforce, diminishing the supply of workers at the same time overall employment numbers contract, he said.

“A bunch of workers who would have been in the labor market, aren’t willing to be, at least at the old wages,” Fox said. “It’s a much more complicated story around wages than you would normally have expected, particularly in a recession.”

COVID-19 outbreaks at warehouses and fulfillment centers, including Amazon’s, have been documented across the country, prompting companies to adjust their processes and invest more in worker safety. While many positions for online retailers can be filled by remote workers, fulfillment centers require people on the floor.

“Workers are choosing to go to work where the risk tradeoff is worth it,” said Wonolo strategy executive Monica Plaza.

For much of the past decade, wage increases have failed to keep pace with job growth and economic expansion, especially for low and modest-income earners. Tennessee is one of five states that do not require a minimum wage, but employers must meet the federal threshold of $7.25 an hour. Massachusetts Institute of Technology estimates the living wage in Nashville for an adult without children as $12.34 an hour and $24.31 an hour for a single parent with one child.

A bunch of workers who would have been in the labor market, aren't willing to be, at least at the old wages. It's a much more complicated story around wages than you would normally have expected, particularly in a recession.   – William Fox, University of Tennessee economist

Nationally, Wonolo has seen a 475% increase this year in advance job requests from employers in the general labor, merchandising, fulfillment and warehousing sectors. Tennessee has continued to grow its warehousing presence with Amazon announcing plans in July for a seventh fulfillment center in Tennessee that is expected to yield 1,000 new jobs in Mt. Juliet.

The demand for those workers is in stark contrast to what hotel and entertainment employees have experienced. The Nashville hospitality sector lost more than 22% of its workforce in the past 12 months, while the number of trade and transportation workers fell by just 1%.

Some Tennessee government and business leaders have pointed to the additional unemployment benefits funded by the federal stimulus package as a potential factor in keeping Tennesseans from reentering the workforce. Fox said the additional $600 a week provided from the federal stimulus package through July may have had a limited impact, but now that weekly unemployment benefits from the state have dropped to $275 or below, he  did not see that as a meaningful deterrent.

“No one is getting a raise to stay home,” Fox said.

Plaza said she expects the demand for fulfillment center employees to extend beyond the holidays as the shift to online sales outlasts the pandemic. That long-term change could help workers in a sector that has been criticized for labor practices and pay. Wonolo is piloting a living wage initiative in Nashville to push company partners to meet that pay threshold and seeks to expand it nationally.

“The competition for the frontline worker in this space will continue to grow as both consumer demands change and worker demands change,” Plaza said.  “The companies are going to have to adjust for the long term, not just in the face of the pandemic.”