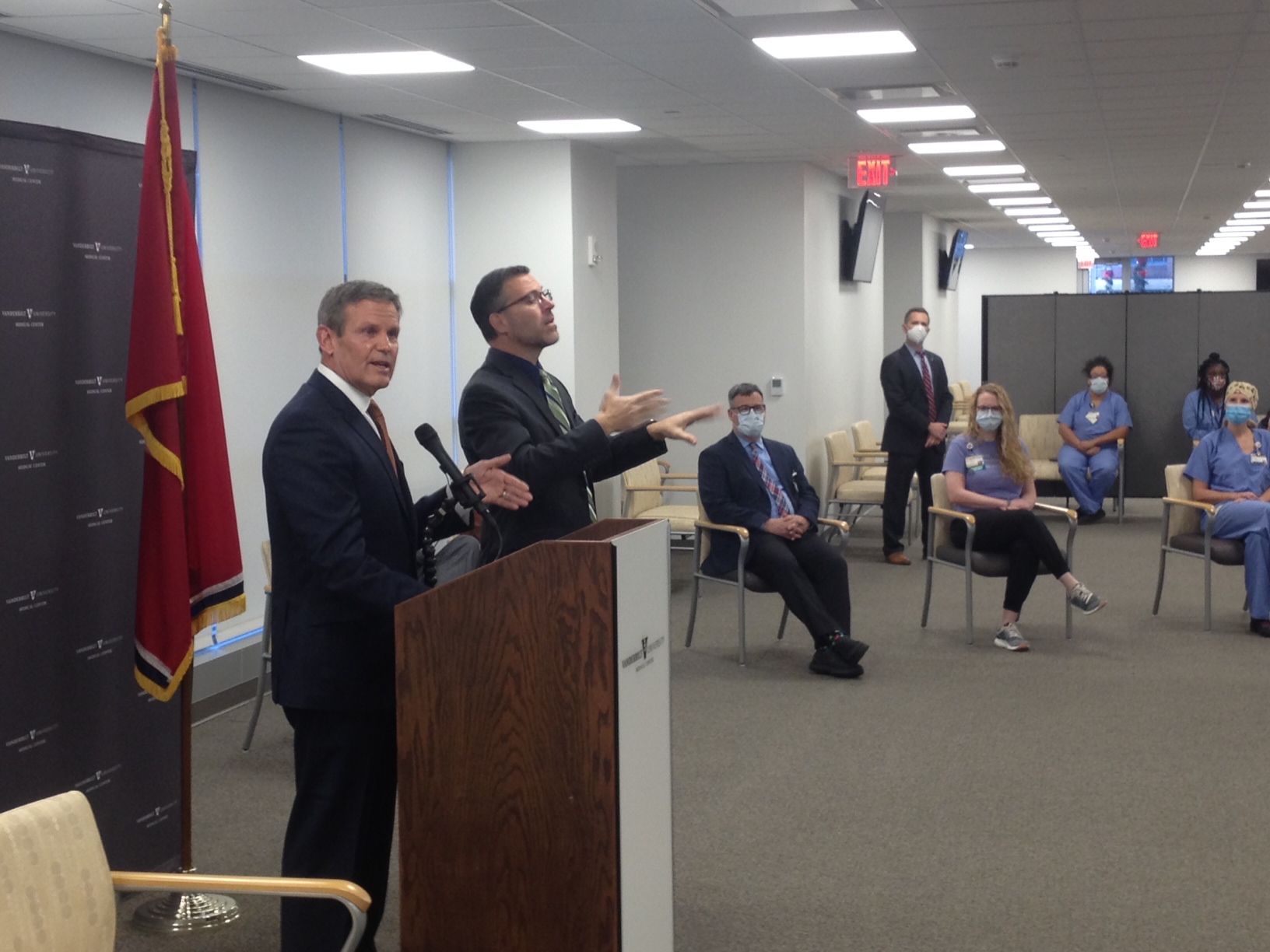 Admitting Tennessee is seeing a “darkness before the dawn,” Gov. Bill Lee blamed a COVID-19 surge on “foolish decisions” over Thanksgiving while urging leery residents to take the COVID-19 vaccination as the state starts its first round.

The governor joined Vanderbilt University Medical Center officials Thursday in kicking off the vaccine program, mainly with healthcare workers and long-term care residents, but reiterated he won’t order a statewide mask mandate or require people to take the vaccine, even as the state is ranked second nationally in the number of COVID-19 cases.

Tennessee could have initiated its immunization program Monday but instead opted to hold 975 doses in reserve in case of spoilage as it started disseminating 56,550 doses of Pfizer vaccine on Thursday.

Vanderbilt hospital was still awaiting delivery of the Pfizer doses by the federal government and planned to start giving them later in the afternoon. Another 115,000 doses of Moderna vaccine are expected to follow.

Lee called it a “historic day and turning point” in the pandemic but said the state can’t “look past the sobering reality” of a resurgence of the virus in which Tennesseans are “getting sicker by the day from COVID-19.”

The governor, who has not issued a statewide mask mandate, refused to admit policy decisions by him and his administration led to the latest increase in cases.

The governor thanked several members of the Vanderbilt hospital staff, who have treated hundreds of COVID-19 patients for the past 10 months, losing only 200 of them.

The governor refused to admit policy decisions by him and his administration led to the latest increase in cases. Since March, Tennessee has had 484,285 cases, up 11,410 over the previous day, and 5,668 deaths, a one-day increase of 53.

He acknowledged the state is going in the “wrong direction” for COVID-19 cases and contended “decisions” by people to gather over the Thanksgiving holiday, many refusing to wear masks, led to the surge.

Lee said his staff is studying new strategies but did not divulge them. Instead, he pointed out he mobilized the National Guard to work in health care, increased testing statewide, designated more “COVID-specific” nursing homes and enabled more people to provide care and tests.

The governor has said he will not shut down the economy again, and he gave no indication about enacting steps to avert the spread of the disease.

“He’s let misinformation by his allies spread like wildfire and left local governments, businesses and families to fend for themselves,” said Yarbro, a Nashville Democrat. “Now he’s disappointed in us for not doing better. It’s irresponsibility of the highest order.”

Early in the pandemic, Lee made executive orders closing or limiting “non-essential” businesses, in addition to taking steps to limit social gathering. He has not made a statewide mask mandate, however, despite the requests of physicians, including former U.S. Sen. Bill Frist, a heart surgeon.

Instead, Lee has given county mayors authority to enact mask mandates. Many, including several Republicans, opted for them, but then lifted them and put them back in place haphazardly.

The governor implored people to wear masks again during the Thursday press conference at Vanderbilt, along with asking Tennessee residents to take the vaccination. The vaccine is to be given in several phases, first to those who work in health care and to the most vulnerable, such as nursing home patients.

“We really know this is a safe vaccine and it is effective, it’s highly effective. We also know that people have reservations about that,” Lee said, noting his plan is to provide information through healthcare professionals about its safety and efficacy so people can make decisions.

In early December, the Pew Research Center reported more than 60% of people nationally would get a vaccine if it were available while 39% said they would not. About 18% of the latter group said they could change their views once the vaccine is distributed.

He's let misinformation by his allies spread like wildfire and left local governments, businesses and families to fend for themselves. Now he's disappointed in us for not doing better. It's irresponsibility of the highest order.   – Sen. Jeff Yarbro, D-Nashville

The Pfizer vaccine is reported to have 95% efficacy. A healthcare worker in Alaska suffered a serious reaction this week and was hospitalized but was not in danger of dying, according to reports. The governor said he would take the vaccine when his population group is eligible for the shot.

“It’s going to be thrilling just to know I have that protection. As I come into work every day I think it will diminish a lot of fears because going home at night sometimes it’s hard not to think about becoming one of these patients myself,” Whitaker said.

While she has seen people succumb to the virus, Whitaker noted she is most “disheartened” by what she sees driving home, including party buses on Broadway and large groups of people without masks eating at restaurants.

“It just really sinks my spirit when I work really hard all day to keep these patients alive and then to see people be that reckless,” she said.

She encouraged people to avoid big gatherings in bars and restaurants and to stay in a “small bubble” of people.