Agents from the Federal Bureau of Investigation and Bureau of Alcohol, Tobacco, Firearms and Explosives converged on an Antioch house named as the residence of a person of interest in the Christmas Day RV bombing on Nashville’s Second Avenue.

Neither local nor federal agencies have named the suspect, but agents were seen entering a house in the 3000 block of Bakertown Road on Saturday afternoon.

Photojournalist John Partipilo was on the scene and shot federal agencies removing property from the house. 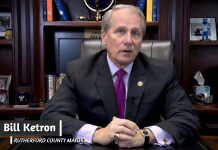