A snap Power Poll was emailed to members late Wednesday afternoon and closed Thursday morning. More than 750 of Nashville’s political, business and non-profit leaders were asked to rate Blackburn’s and Hagerty’s decisions to challenge Biden’s victory. Both had said they would object to the certification of the Electoral College showing Biden the winner, joining some 10 other Senate colleagues. In the midst of the formal certification process, the Capitol was stormed by Trump supporters.

By the time order had been restored Wednesday night, and the Senate had reconvened its deliberations, Blackburn and Hagerty had reversed course and dropped their opposition.

Here were the question and answers to the Power Poll survey:

“U.S. Senators Bill Hagerty and Marsha Blackburn joined the group of senators challenging president-elect Joe Biden’s victory as Congress met to certify the Electoral College vote. How would you rate their decision to do so?” 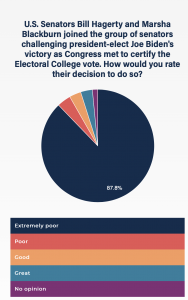 756 Power Poll members were sent surveys on Wednesday at 6 p.m. The survey closed at 10 a.m. Thursday morning. 328 participated, for a response rate of 43.39%. Power Poll members are listed here (https://www.powerpoll.com/nashville/members). They include nearly every elected political official in Nashville, CEO’s of important businesses, significant philanthropists, important figures in media, non-profit heads, Music Row figures, emerging activists, and more. Power Poll is not a scientific poll, although it provides an important, non-partisan glimpse into the opinions and beliefs of the people who essentially run Nashville and cast a wide net in Middle Tennessee.

Blackburn and Hagerty are known as full-on supporters and devotees of President Trump, which, in Tennessee, has worked well. In his recent successful campaign to succeed outgoing Sen. Lamar Alexander, Hagerty suggested placing Trump on Mt. Rushmore. Blackburn has been similarly laudatory. Both have provided cover to unproven claims, lacking in evidence, that the election was stolen from President Trump.

Nashville is a solidly Democratic city, so in one sense the responses do not surprise. And yet the non-partisan Power Poll includes significant numbers of pro-business, pro-Chamber Republicans. Which makes it all the more remarkable that Blackburn’s and Hagerty’s decision to oppose Biden’s certification was viewed so negatively. Power Poll members also posted numerous on-the-record comments that left little to be determined.

“Leaders lead,” wrote Keith Simmons, former longtime managing partner of the law firm Bass, Berry & Sims. “They seek to elicit from us our better selves, not pander to the mobs and lower us to the lowest common denominator.”

Butch Spyridon, a major actor in the city who oversees Nashville’s Convention and Visitor’s Bureau, wrote: “Our senators were complicit in today’s events. They carried Trump’s water and embarrassed our state and country, not to mention endangered lives. All the while their leader hid in the White House! Never has there been a more important time for unity and true American leadership, not partisanship.”

Dave Kloeppel, the former president and COO of Gaylord Entertainment Company who is now co-founder and chairman of Evental Global, Inc., wrote that, “From Corker and Alexander to Blackburn and Hagerty, how can our representation in the Senate have deteriorated so much?”

Meanwhile, Power Poll members were also asked to submit brief, one-line remarks that they “would like Hagerty and Blackburn to know.” Those messages were posted anonymously from members. A few were favorable to Blackburn and Hagerty; most were not.

Here are all the comments, unedited for grammar and syntax. Significant numbers of Power Poll members submitted remarks, eight of which were deleted, mostly for use of foul language.