Gov. Bill Lee addresses members of the 112th General Assembly at the opening of a special session dedicated to education. (Photo: John Partipilo)

Taking a shot at the state’s two largest school systems, Gov. Bill Lee accused Metro Nashville and Shelby County school systems of caving in to “scare tactics” when they opted to teach students virtually during a pandemic-affected school year.

“Months ago, when critics were loud and the scare tactics were louder with all the reasons why we couldn’t safely return students and teachers to the classroom, we traded that speculation for science,” Lee said Tuesday, addressing the 112th General Assembly on the first day of a special session he called to focus on education. “We followed that science down a path that would make us one of the first states in the country to get students and teachers back in the classroom this fall across 145 of our 147 districts.”

Lee did not address the science of COVID-19 and whether the virus can spread between students, teachers and staff and the impact on those with underlying health problems who are more likely to suffer from the coronavirus.

While a number of school districts statewide have used a hybrid model, sending students to classrooms two to three days a week and teaching them virtually the rest of the time, Shelby and Metro Nashville schools have taught by computer the entire year. Plans to bring students back to classrooms were scuttled amid a COVID-19 surge after Thanksgiving.

Education Commissioner Penny Schwinn later told the Senate Education Committee that students learn better when they’re in a classroom with one of the state’s highly-rated teachers, rather than taking courses online. She didn’t provide statistics showing any difference between students in Shelby and Metro Nashville and their peers across the state.

Lee pointed toward a projected 50% decrease in reading proficiency and 65% drop in math performance for third-graders as one of the main reasons to bring students back to classrooms.

Much of the governor’s legislation – set to be considered over the next two days – doesn’t specifically push districts back into classrooms on a full time basis. Legislators have talked about holding out a “carrot” to encourage Metro Nashville and Shelby to return students to in-school learning, but it wasn’t discussed Tuesday.

Lee did not address the science of COVID-19 and whether the virus can spread between students, teachers and staff and the impact on those with underlying health problems who are more likely to suffer from the coronavirus.

State Rep. Mark White, an East Memphis Republican who chairs the House Education Committee, said he sees “consensus” of support for the plan, and he agreed with the governor’s assessment that virtual education is not working.

“These two school districts make up 20% or more of all the students in Tennessee, and so if they’re not doing well, the state’s not doing well,” White said. “And they also represent our low-income, minority students, which we’ve worked so hard to catch up and get them on equal footing with other students.”

The education commissioner could withhold a portion or all of Tennessee Basic Education Program funds from any system that fails to meet those requirements.

The governor’s legislation calls for new initiatives, including a $100 million phonics reading program designed to bolster literacy, some $38 million of which will be paid out of the state’s welfare program, called Temporary Assistance for Needy Families, which had a $74 million surplus in 2019.

As part of the program, students who don’t score well enough on reading tests can be steered to after-school mini-camps, summer reading school, year-long tutoring and a third-grade “reading gate” that would hold students back if they don’t meet certain standards. Those would be in-person courses. 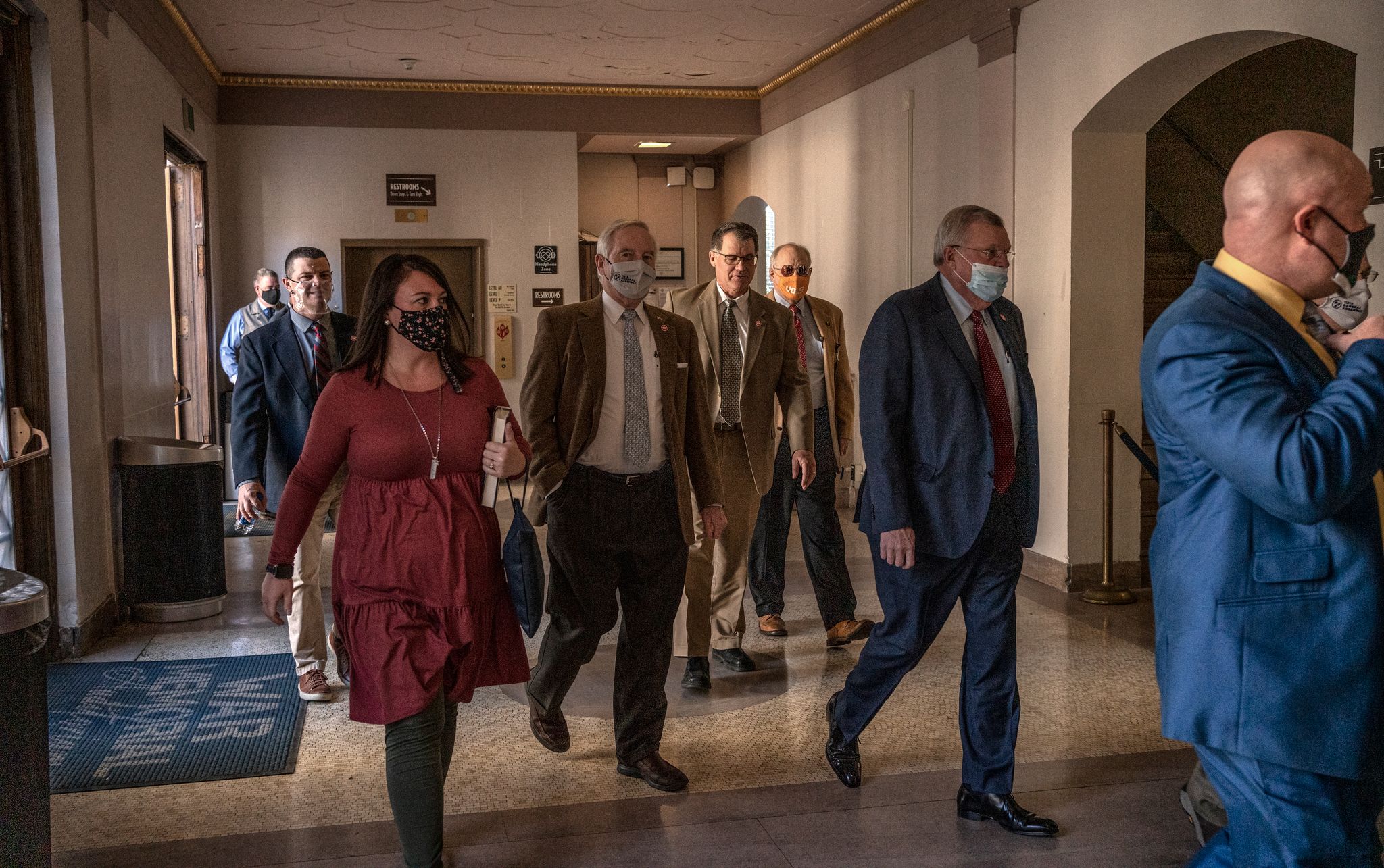 Legislators file into the War Memorial Building on Jan. 19 for Gov. Bill Lee’s address at the start of a special session. (Photo: John Partipilo) 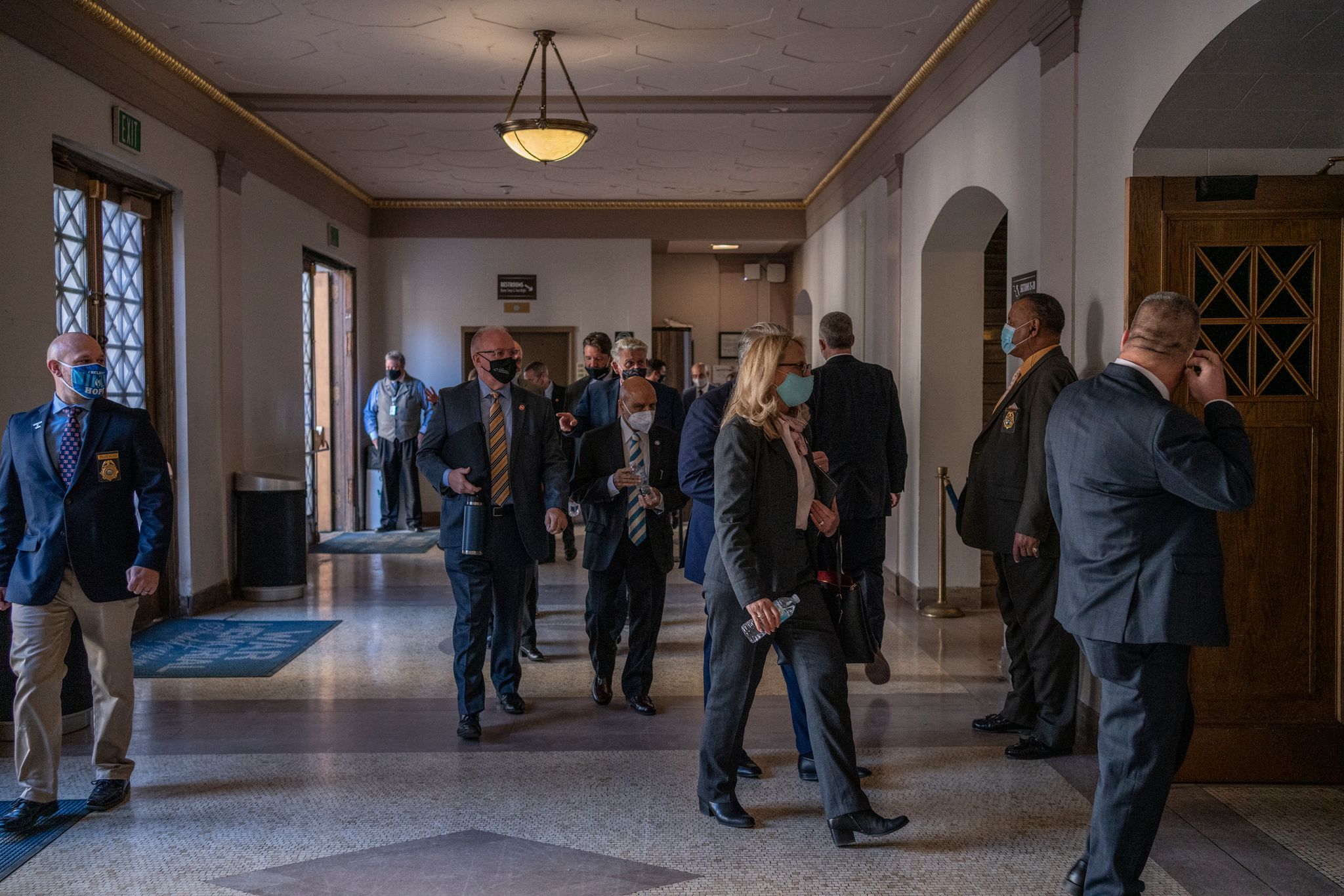 A group of legislators file into the War Memorial Building for Gov. Bill Lee’s address at the start of a special session. (Photo: John Partipilo) 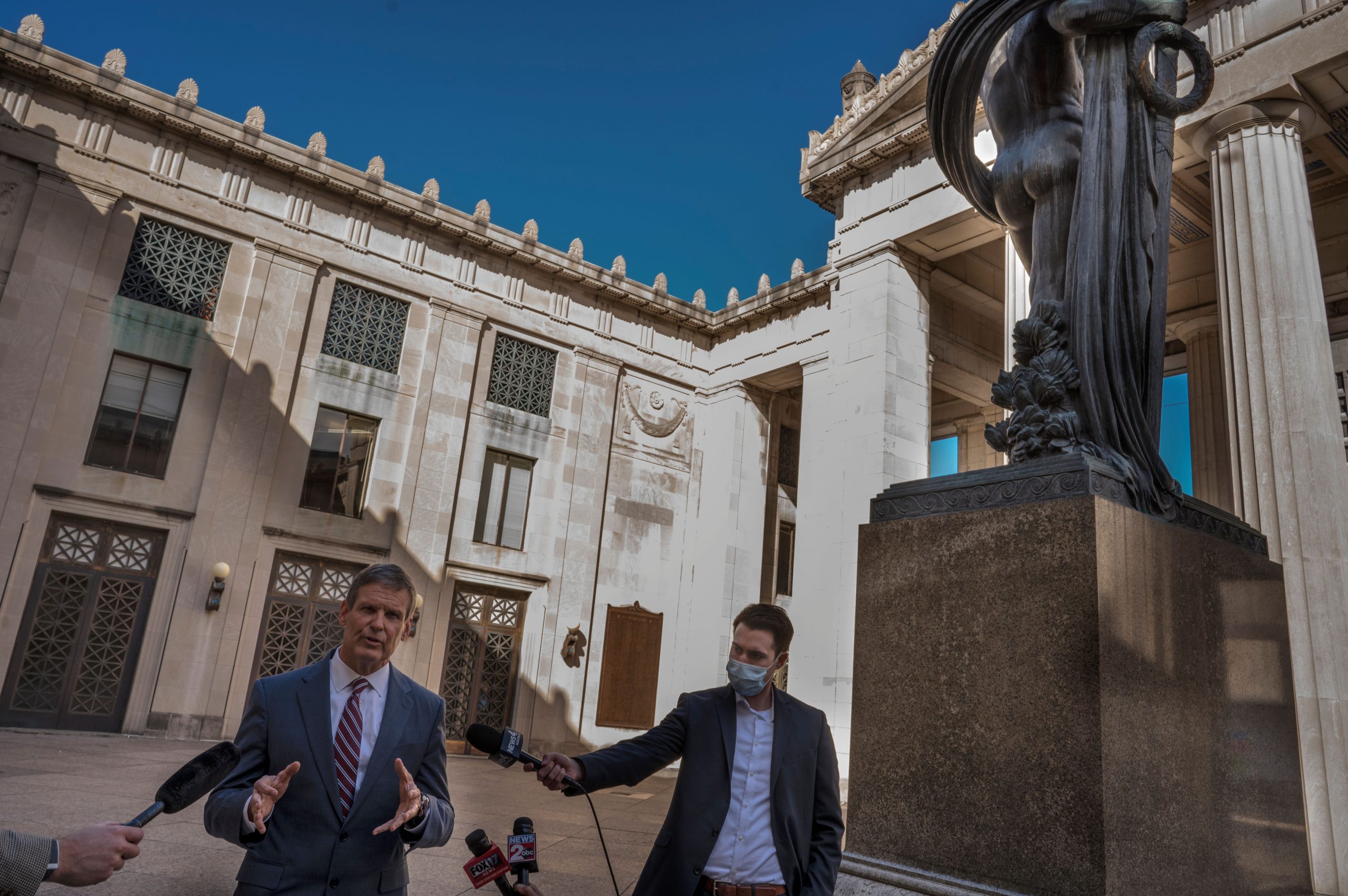 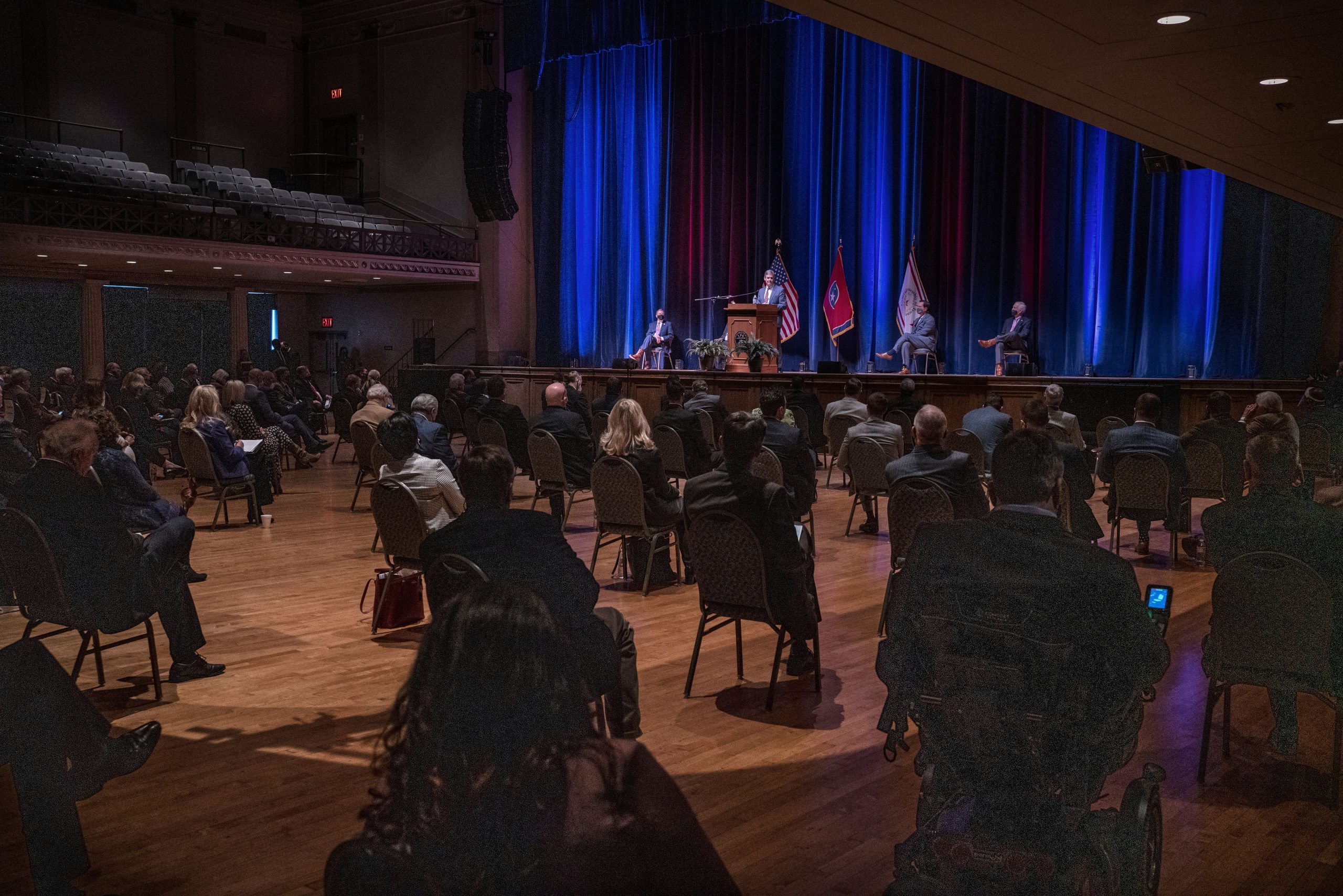 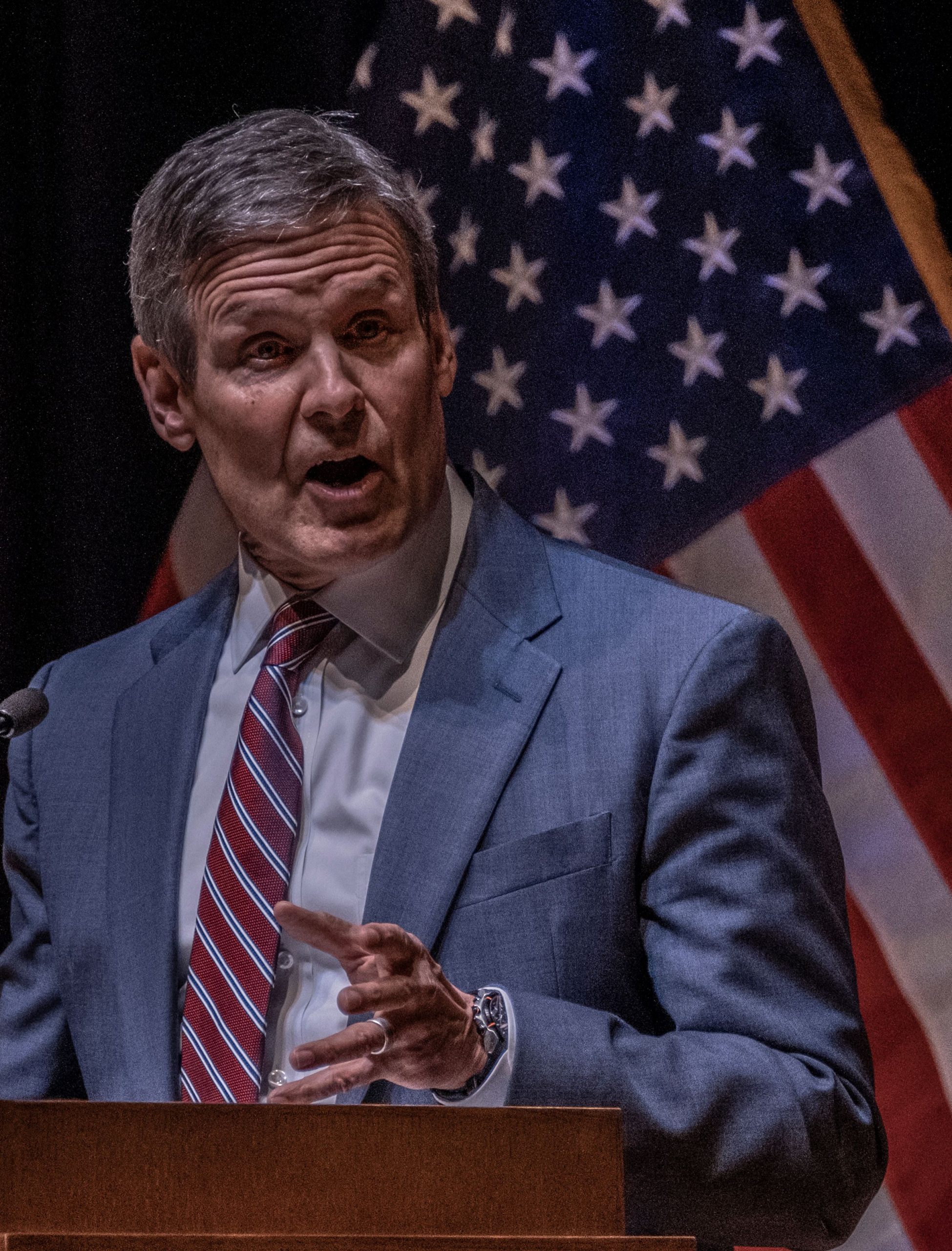 The director of Maryville City Schools is objecting to the “reading gate” requirement, according to a report, saying the state is trying to bolster its score on a national assessment.

In addition to the literacy plan, teachers are to receive a pay increase after the governor and Legislature removed funds for a promised 4% raise when the pandemic struck in March.

Initially, a non-recurring 2% pay raise retroactive to Jan. 1 would take effect immediately, and a recurring 4% increase would be added to the instructional component of the Basic Education Program. But the first increase could be closer to 1 % and the next round would not lead to a 4% raise for every teacher, according to Schwinn.

“Whatever money we give to teachers we want the teachers to get,” White said. He noted that would be “easier said than done.”

After years or problems, the state’s TNReady test would be administered in the spring to provide an “accurate picture” of where students and districts stand, but teachers and districts would be held “harmless” and wouldn’t suffer negative consequences for poor student test scores.

Republicans who control the House and Senate with supermajorities are hailing the governor’s proposals, and it could pass with relative ease.

But state Senate Minority Leader Jeff Yarbro, a Nashville Democrat, felt it was counterproductive for the governor to challenge Shelby and Metro Nashville for sticking with virtual courses.

“If you’re trying to lead a statewide conversation on improving education and literacy efforts, there’s no value in being divisive, and it’s disingenuous for the governor to be shifting blame to districts when Tennessee is so far behind almost every state when it comes to controlling this pandemic,” Yarbro said.

In late December and early January, Tennessee had one of the highest rates of COVID-19 in the nation.

Yarbro pointed out Tennessee has been struggling for decades in every area the special session is designed to attack, and he questioned whether the pandemic should be used as the reason for a special session. Tennessee is 46th in the nation for student funding and is facing a teacher shortage.

Rep. Vincent Dixie, chairman of the House Democratic Caucus, acknowledged the goal is to return students to classrooms but raised questions about safety in the midst of the pandemic.

Whether the state is able to use TANF funds for education could run into legal questions, according to Yarbro. But Dixie said at least the state will be using the money instead of sitting on it.