State Rep. Barbara Cooper understands the trepidation among Black Tennesseans about getting a COVID-19 vaccination. But after a friend recently died from the virus, she is more determined than ever to set an example for her constituents to ward off the deadly illness.

The 91-year-old Cooper, a Democrat representing District 86 in Memphis, received her second dose of the Moderna vaccine Tuesday at the Pipkin Building, and is encouraging those in “high-risk categories” similar to her to “roll up their sleeves” and take a vaccination to fight the virus that has ravaged Shelby County.

The county has more confirmed cases than any in the state with 81,138 and 1,271 deaths out of 7,975 statewide. African Americans are also reported to have a higher morbidity rate for COVID-19 than other races, accounting for 1,685 or 17%.

A retired educator who has served in the General Assembly since 1996, Cooper was worried about accessibility to COVID-19 vaccines for the Black community as well as the fear some residents might have about getting the shot.

Only two locations are being used across Memphis to administer vaccinations through Feb. 6, the Pipkin Building at 940 Early Maxwell Drive and Germantown Baptist Church at 9450 Poplar Ave. People can schedule an appointment at https://www.signupgenius.com/go/seconddosepipkin. Another Memphis vaccination center is opening Feb. 5 at Southwest Tennessee Community College’s Whitehaven campus on Finley Road. In Davidson County, shots are being given at the Music City Center.

Cooper’s  afraid some elderly people won’t be able to make their way to those locations.

But while the small number of vaccination sites could be a problem, the mistrust of science and medicine that has plagued the Black community for decades because of tragedies such as the Tuskegee study of untreated syphilis in Black men between 1932 and 1972 continues to do more harm.

Cooper believes it’s time to put those fears aside.

“It’s very essential that our people get this vaccination and not linger around, wait and see what’s going to happen. Right now, I can trust the (Centers for Disease Control) and Dr. (Anthony) Fauci on what they’re saying,” Cooper told Tennessee Lookout in a phone interview.

That pervasive doubt within the Black community is troubling, Cooper says, describing one close friend who wanted to wait a while and see what would happen with the vaccine before receiving a dose.

“You know, she’s dead and gone that quick. In about two weeks, she was gone. And that has really, really raised my (concern) even more. Let’s don’t wait,” she said.

As second doses continued Tuesday across the state, more than 667,000 total vaccinations were reported by the Tennessee Department of Health, with 7.03% of the state’s 6.9 million people receiving at least one dose.

Cooper is encouraging constituents to take the vaccine for protection but warns them not to “get careless” and continue wearing masks, social distancing and washing hands. She leaves her home to go to the doctor or pharmacy but prefers to stay in, even though she will be traveling to Nashville when the Legislature starts the 112th session of the General Assembly Feb. 8.

You know, she's dead and gone that quick. In about two weeks, she was gone. And that has really, really raised my (concern) even more. Let's don't wait.   – Rep. Barbara Cooper, speaking of a close friend.

Under the Biden Administration, the federal government boosted vaccine deliveries this week to the state by 16%. Since Jan 25, 156,333 vaccinations have been reported, and 10,562 were given on Monday.

“Tennessee orders every dose of COVID-19 made available to the state, and we’re working as hard as we can to administer it as fast as we can once we receive it,” said Shelley Walker, spokeswoman for the Department of Health. “We have begun receiving increased allocations of vaccine this week, and are now registering Tennesseans aged 70 and up for vaccinations.”

Tennessee hopes to expand vaccination to Phase 1b groups and those 65 and older in March if the supply continues to increase, according to Walker. The 1b group includes K-12 and child care staff and first responder operations personnel.

The state is in the top 20 nationally for the number of doses administered and the daily rate given and in the top 10 for second doses, according to Bloomberg’s vaccine tracker, Walker said. 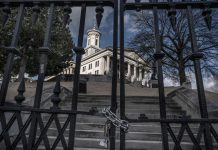