Coming off one of the most difficult years in state history, Gov. Bill Lee delivered his plan Monday to boost Tennessee’s economy and jumpstart K-12 education with a $41.8 billion budget plan as the COVID-19 crisis continues, while praising the state’s pandemic response as effective.

The governor, though, is not renewing a call for family leave among state employees, even as he calls for a pro-family values package. He is, however, moving forward with permit-less carry for handguns, a proposal that could cost the state $17 million in lost fees and incarceration.

With unemployment down to 6% from a high of 15.5% in April 2020 and coffers flush with more than $1 billion in surplus revenue, Lee’s task isn’t insurmountable. The state maintained $1 billion in its unemployment trust fund, and Lee’s spending plan jumps about $1.4 billion over this year’s zero-growth budget.

We have conservative proposals for your consideration that will reduce crime, support strong families and get our economy back up to speed, especially in rural Tennessee.

Yet he must still cope with more than 10,000 deaths from the coronavirus, which brought the state to a standstill a year ago, forcing the closure of schools and numerous “non-essential” businesses.

The state already has more than $6 billion in reserve funds, and the governor will deposit another $50 million in the rainy day fund, bringing it to $1.5 billion and the TennCare reserve to $500 million. The state did not dip into the rainy day fund during the COVID-19 crisis, instead depending on federal stimulus funds to get through the budget crunch after cutting the current budget to zero growth.

“We have conservative proposals for your consideration that will reduce crime, support strong families and get our economy back up to speed, especially in rural Tennessee. Our proposals honor the individual yet benefit the state as a whole, and they will leave us well-positioned for the recovery that has already begun across our state,” Lee told the General Assembly in a rare State of the State address in the War Memorial Auditorium.

State law requires the governor’s speech to be given in the House chambers of the State Capitol, but the rules were bent with a legislative resolution to provide social distancing at the War Memorial amid the COVID-19 atmosphere. At least 10 legislators have caught the virus, with one still hospitalized, and a state senator left the recent special session after testing positive for COVID-19. Lee’s wife, Maria, also tested positive for the virus, but he has remained free of the novel coronavirus.

Lee, who has already said he would seek a second four-year term, announced he will be following his election strategy and cross Tennessee again in the coming year.

“We will celebrate that since 1796 the ordinary has made us extraordinary and remember that generations before us have not just weathered but excelled in the cycle of perseverance, character and hope. I will once again travel to all 95 counties to reach the unsung people and places that make our state who she is,” he said.

Lee signed legislation last week from the education special session giving teachers a small raise totaling $43 million and putting $110 million into literacy programs, along with new reading requirements that could keep thousands of third-graders from moving on to fourth grade. 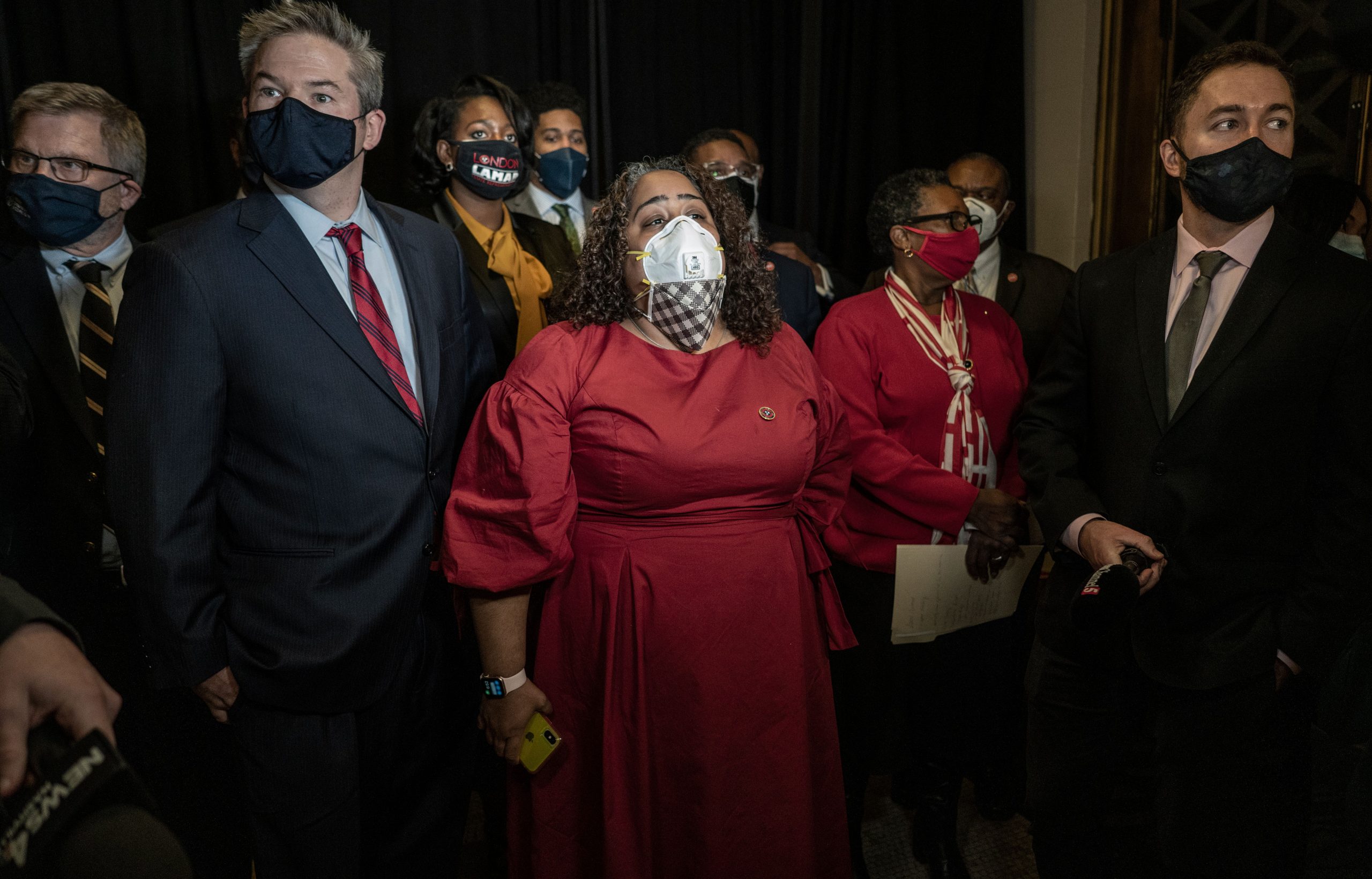 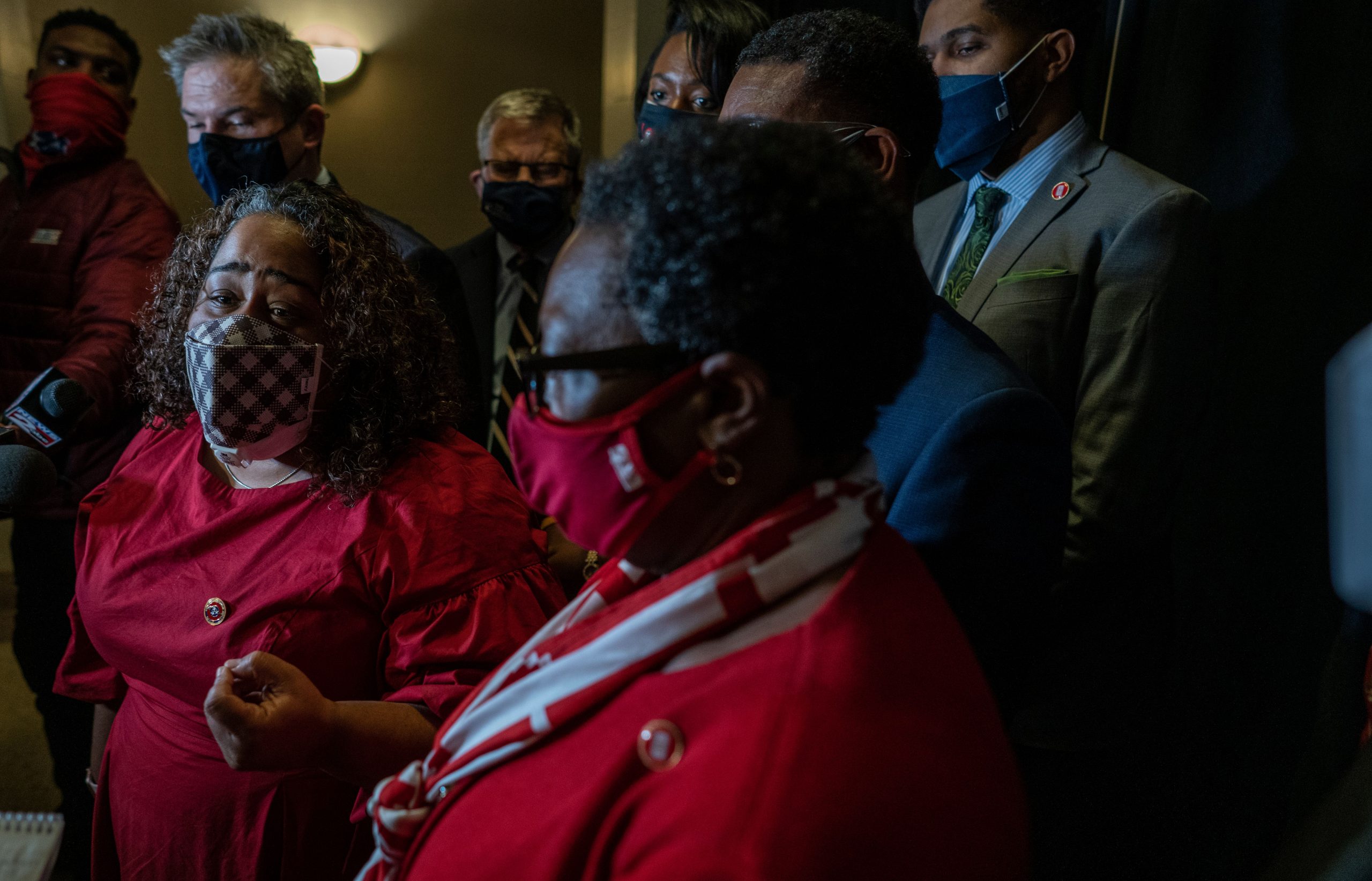 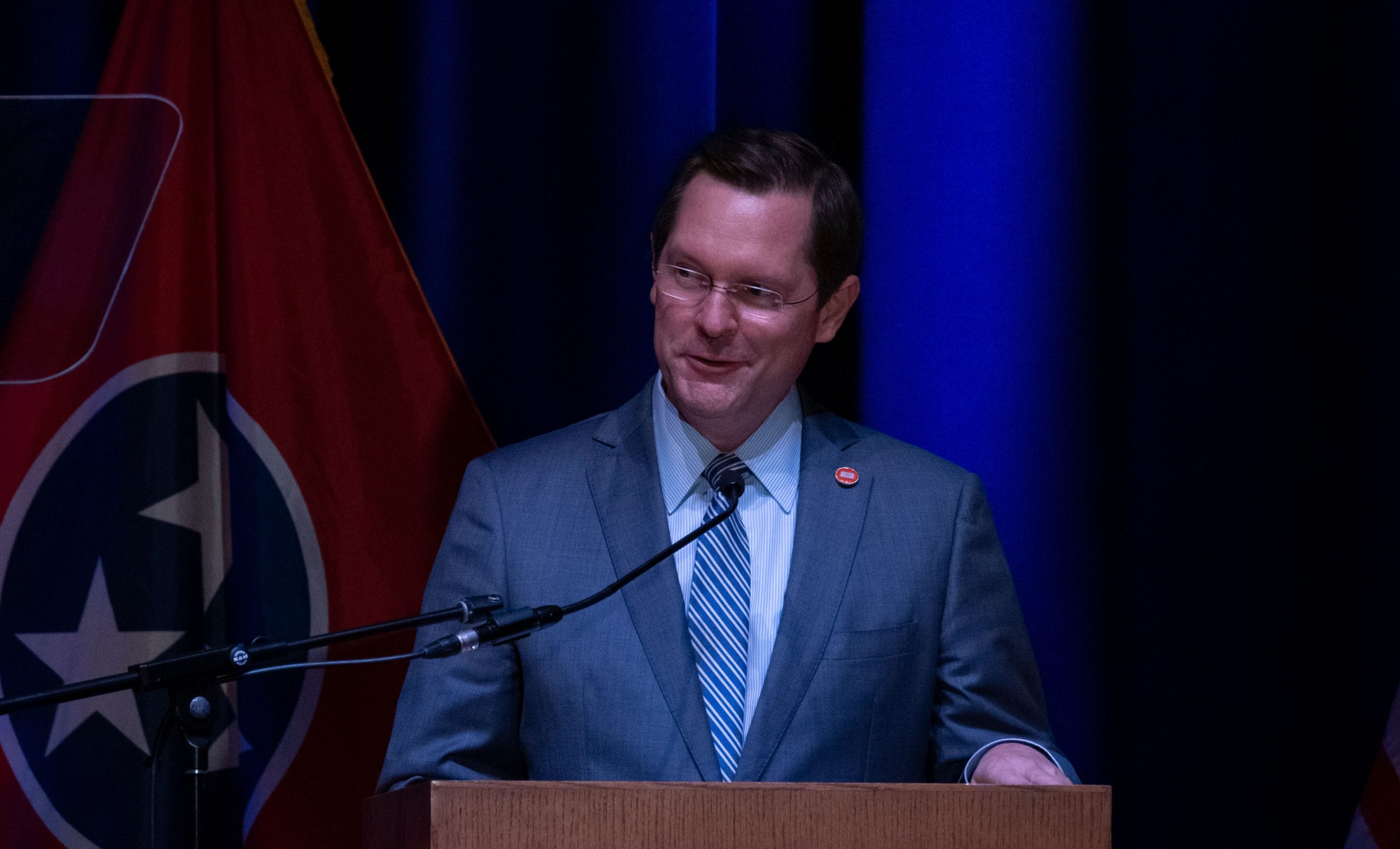 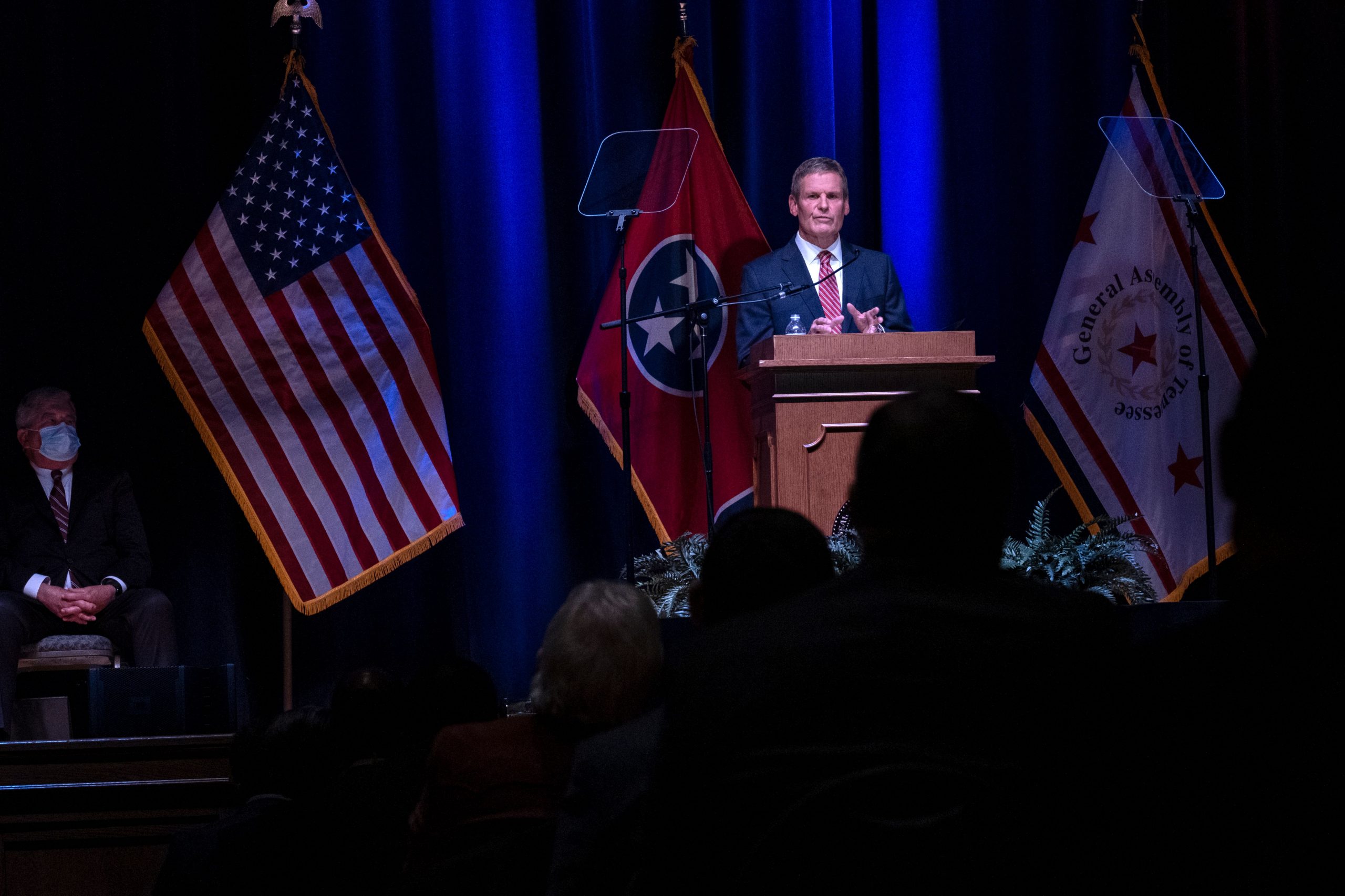 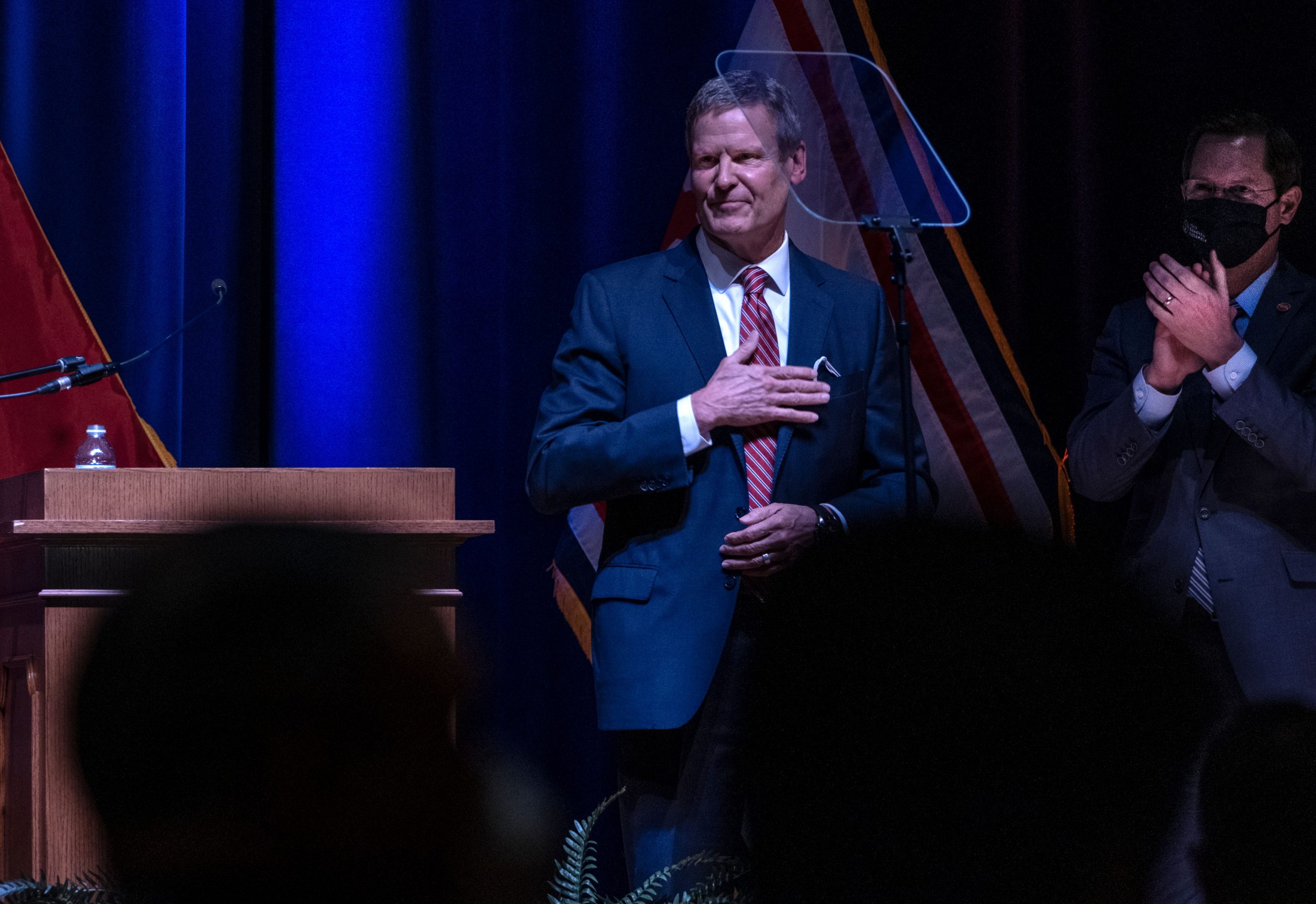 The governor is seeking $120 million more for his budget plan for an increase in teacher pay for fiscal 2021-22. His spending plan also fully funds the Basic Education Program with $70.5 million, though critics say it still underfunds education.

The Legislature also will hold teachers, schools and districts harmless for poor results on the TNReady this spring, since tens of thousands of students went to school virtually or on hybrid schedules, bouncing them in and out of classrooms since last March.

Perhaps preparing for a significant drop in test scores, Lee said the state emphasizes education to prepare students for “productive lives, not just the latest standardized test.” He noted in a recent conversation with Education Commissioner Penny Schwinn, he conveyed the importance of preparing students for “life beyond the classroom.”

Lee pushed for Metro Nashville Public Schools and Shelby County Schools to return all students to classrooms, his administration threatening at one point to pull federal funds. But he shied away from that last week after Metro Nashville announced a phased-in return, saying he is working with both systems to provide support.

The governor took a shot at the new Biden Administration and raised concerns about the nation’s faith in elections, referencing former President Donald Trump’s claims of fraud.

Lee said he plans to make a one-time $200 million investment next fiscal year in rural broadband expansion, combining it with private investment, and build the technology infrastructure outside of the state’s urban areas. His budget proposal also contains $200 million in local government grants and about $100 million more for the Department of Correction.

“Whether it’s running a small business, accessing virtual learning or accessing health via telemedicine, slow Internet speeds have many in rural Tennessee left at a disadvantage,” Lee said.

Nearly a year after a judge struck down state legislation severely restricting abortion, Lee announced new initiatives in foster care and adoption, saying “being pro-life isn’t just about defending the unborn” and noting the state needs to target “struggling families.” Tennessee has been criticized for building a $742 million reserve in the Temporary Assistance for Needy Families (TANF) fund instead of finding a way to use that money to benefit the poor.

The governor took a shot at the new Biden Administration, saying he will be keeping an eye on attacks on the 10th Amendment affecting states’ rights.

He also raised concerns about the nation’s faith in elections, in reference to the presidential election and former President Donald Trump’s claims of fraud, none of which have been substantiated. Lee said, nevertheless, if every state in the nation followed the examples of Secretary of State Tre Hargett, they wouldn’t have late and questionable results.

In addition, the governor warned that Tennessee won’t be able to use “shared savings” from a Medicaid block grant for expanding TennCare services such as those for the mentally disabled if “partisan attacks prevail” and the Biden Administration rescinds the federal agreement.

In advance of Lee’s address, Sen. Raumesh Akbari, chairman of the Senate Democratic Caucus, rebutted the governor’s speech saying families statewide were finding it difficult to survive even before the pandemic hit in March 2020. She detailed a crisis in healthcare affordability and access, education gaps and decades of racial injustice, all of which were exacerbated by the pandemic.

Akbari pointed out Tennessee has suffered one of the worst COVID-19 outbreaks in the world, with more than a million people losing jobs and more than 10,000 dying, including an aunt of hers. She called his reaction to the pandemic “lax.”

“Oftentimes the governor’s interventions started too late, ended too early, and did too little. Our calls for aggressive, science-based mitigation strategies have been met with excuses, ideology and denial,” Akbari said. “Too often, the administration presented false choices: between safety and student learning or between a response focused on the pandemic or the economy.”

Lee reopened Tennessee’s economy earlier than other states’ governors did and, though he gave county mayors authority to mandate masks, he did not put a statewide requirement in place, sometimes creating uncertainty in rural and suburban areas.

It shouldn't be possible to spend dollars this big with ambitions this small.

The day Tennessee’s COVID-19 deaths passed 10,000, the governor called it a “very somber statistic,” but he said that moment was preventable “only if the global pandemic had not happened.”

Those include paid family and medical leave for all fulltime workers, new childcare options, a gradual increase in the state’s minimum wage of $7.25 and updated unemployment benefits and cash assistance.

Senate Minority Leader Jeff Yarbro pointed out the governor plans to spend a minuscule amount on teacher pay in spite of having a large surplus.

“It shouldn’t be possible to spend dollars this big with ambitions this small,” said Yarbro, a Nashville Democrat.

He pointed out the governor’s budget plan calls for spending $1 billion on state buildings but only a fraction of that into improving public education.

Yarbro knocked the governor’s plan on criminal justice, noting instead of reform, he is spending heavily on state prosecutions, jail reimbursement and salaries instead of keeping people out of prison. Lee entered office with a plan to reform criminal justice, mainly through education and treatment to reduce recidivism, but it isn’t reflected in his budget document for fiscal 2022, other than $4.6 million for new day reporting centers for former inmates.

The Senate Democrat called the governor’s teacher pay raises “pathetic” and pointed out the Legislature and governor eliminated them in spring 2020 before renewing small increases two weeks ago that won’t keep up with inflation. The state would need to spend $560 million to catch up with Alabama, he said.

If I was one of the other 49 states, after watching that speech, I would be like, I want to move to Tennessee because they're getting it right.

The governor put about $5.6 million into the TennCare for women’s post-partum treatment. But even though Yarbro called that good news, he said, “You can tell how much a priority something is by whether or not we’re spending as much on it as we did on those sock masks.”

The governor spent $8 million during the early stage of the pandemic on a no-bid contract for sock masks.

House Republican Caucus Chairman Jeremy Faison said he felt Lee “did a fabulous job” with his address, showing the state will continue to lead in education, jobs and COVID-19 recovery.

“If I was one of the other 49 states, after watching that speech, I would be like, I want to move to Tennessee because they’re getting it right,” said Faison, a Cosby Republican.

He felt the $120 million for teacher pay goes far enough, on top of increases approved for the first part of 2020. He noted many constituents in his district in the mountains of East Tennessee don’t have Internet access and that expanding Internet access is crucial to the state’s future.

Republican state Rep. Michael Curcio said he can’t think of another state that’s done $200 million worth of broadband access in one year.

He also called the governor’s plan for teacher pay a “massive investment.”

Biden’s State of the Union address by States Newsroom March 1, 2022
$200M TNInvestco program winds down, serving as a cautionary… by Jamie McGee January 4, 2022
Settled into new homes, refugees in US say they are working… by Dulce Torres Guzman June 20, 2021