An anti-tax group with opaque funding is taking another swing at completely overhauling how Metro sets its tax rate just a few months after its first charter amendment proposal was deemed illegal by a Nashville judge.

The group 4GoodGovernment sent out mail pieces late last week seeking the approximately 32,000 signatures it would need to trigger a voter referendum on six proposed changes to the Metro charter. The group is led by attorney Jim Roberts, who has been at the center of political and professional controversy.

So, Roberts went back to the drawing board, drafting six changes to the charter amendment. Most notably, 4GoodGovernment wants to revert the property tax rate to its 2019 levels before the 34 percent increase. The tax cut would take effect in the upcoming fiscal year beginning June 30.

The charter amendment proposal would also:

The last measure is clearly aimed at the Nashville SC fairgrounds soccer stadium project since the Tennessee Titans and Nashville Predators already have lease clauses in place if those franchises leave town.

The proposal to make it easier to recall elected officials is notable since another conservative group failed to garner enough signatures to recall Mayor John Cooper last year. It currently takes 15 percent of the voters in the previous countywide election to recall a Metro official.

Roberts did not respond to questions about why he thinks this effort will pass legal muster, or who is financially backing his cause. He told The Tennessean last year that the first referendum was backed by the anti-tax group Americans for Prosperity, which is funded by the Koch family. 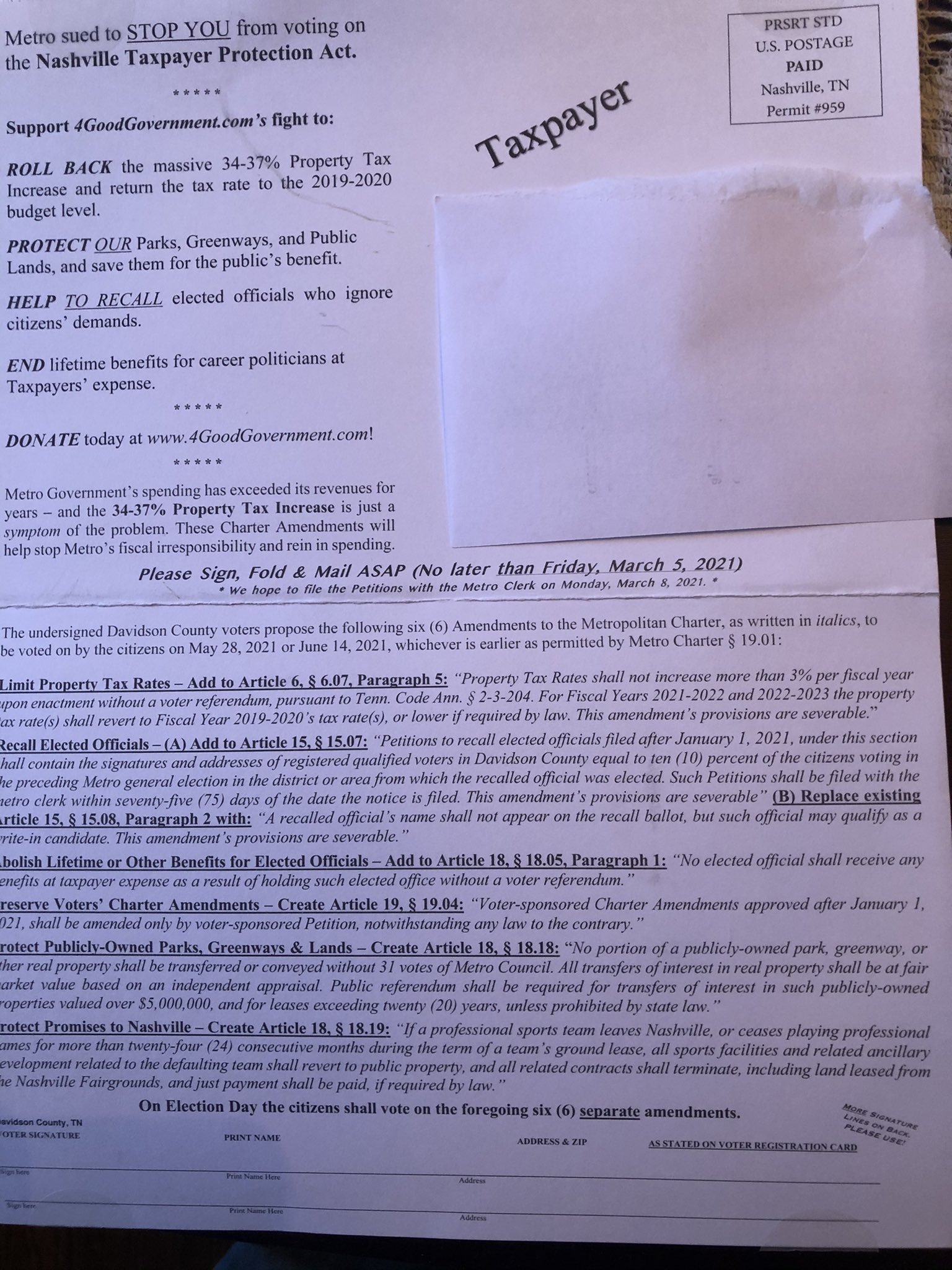 Copy of mail piece sent by a group called 4GoodGovernment. 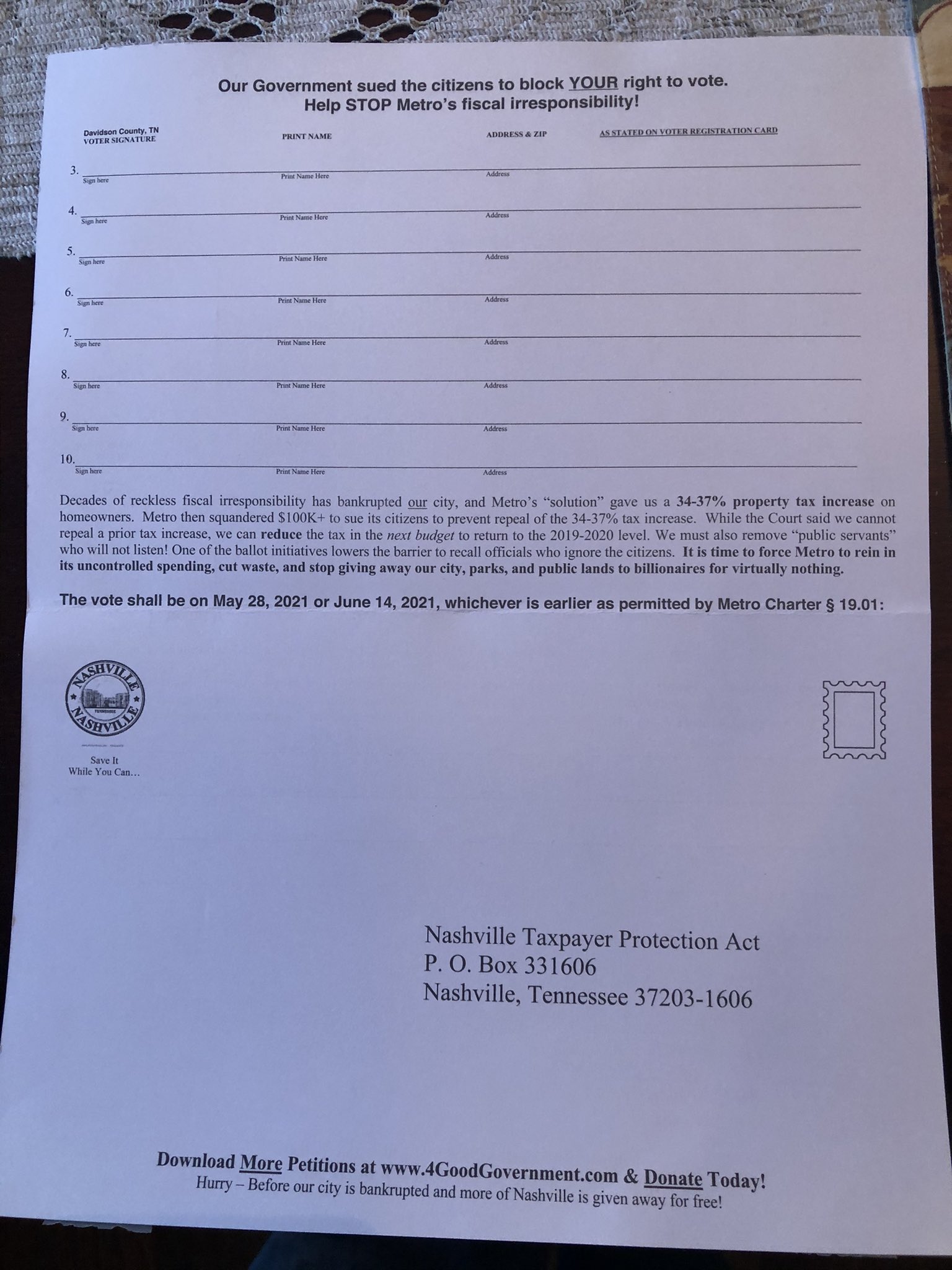 Flip side of mail piece from 4GoodGovernment with no return address.

“Decades of reckless fiscal irresponsibility has bankrupted our city, and Metro’s ‘solution’ gave us a 34-37 % property tax increase on homeowners,” the group said in its petition signature materials. “Metro then squandered $100K + to sue its citizens to prevent repeal of the 34-37% tax increase. While the Court said we cannot repeal a prior tax increase, we can reduce the tax increase in the next budget to return to the 2019-2020 level.

“We must also remove ‘public servants’ who will not listen! One of the ballot initiatives lowers the barrier to recall officials who ignore citizens.”

That would make it fairly easy to recall an elected official. Say, for instance, that a mayoral candidate who earned 20 percent of the vote wanted to target their opponent who won the race. The losing candidate could mine their voters to clear the relatively easy threshold of 10 percent of voters in the previous election. And just like that, there would be a recall and the new mayor would not be able to appear on the ballot, making it unlikely that the incumbent would keep their job.

Metro Councilman Bob Mendes, who chaired the budget committee last year when the tax increase passed and who pushed for increases in previous budget cycles, bashed the latest proposal.

Mendes pointed out that Metro has never passed a tax increase as low as 3%. The typical Metro process has been to go several years without an increase, and then approve a higher rate. Prior to last year’s increase, Metro hadn’t raised taxes since 2012.

“What they attempt is very limiting,” Mendes said.

4GoodGovernment attempted to address the legal shortcomings raised by Hobbs Lyle when she ruled last year’s proposal unconstitutional by making the first two provisions – the anti-tax measure and the recall measure – subject to severability. That would allow a judge to strike down the parts of the initiative that might be deemed illegal without killing the entire proposal. Roberts also proposes for voters to decide each of the six amendments separately.

Mendes pointed to an array of legal problems with the newest proposal, including the amendment aimed at killing the soccer stadium project. He said that proposal may contradict existing contracts and bond agreements, since the debt has already been issued to pay for the fairgrounds stadium.

Mendes also said the proposal on abolishing lifetime benefits for elected officials seems to be illegally worded, since the actual proposal seeks to take away “any benefits at taxpayer expense” for elected officials. That proposal doesn’t distinguish between current officeholders and those who have completed their terms, presumably meaning court clerks and the district attorney would lose their health benefits while in office if that amendment passed.

The Metropolitan government suffers from many problems, mostly self-inflicted. These six proposed charter amendments solve hardly any of them.

There’s no doubt a legal challenge is coming, just as last year’s proposal provoked a lawsuit.

In 2006, voters approved a measure to cap the property tax rate at its level and require a referendum should Metro seek to raise the rate. Sue Cain, the legal director at the time, wrote a legal opinion deeming that the charter amendment was likely to be deemed illegal. But, Metro has never tried to raise the rate over the 2006 levels, so the issue has never been decided in court.

That means even if the 4GoodGovernment measure is approved by the voters, the tax rate component could be challenged in court and never take effect.

Nashville attorney Jamie Hollin, the former Metro Councilman who frequently practices in the area of Metro law, said the proposed charter amendments solve “hardly any” of the city’s problems. Hollin is the only candidate to win a recall election in Metro history, unseating Councilwoman Pam Murray in 2009.

Hollin said he understood why critics would feel “aggrieved” by Metro. But, he said trying to use the charter amendment process to “topple our local government is yet another time suck with no corresponding benefit beyond some hype and clicks.”

“The Metropolitan government suffers from many problems, mostly self-inflicted,” Hollin said. “These six proposed charter amendments solve hardly any of them. Like the facially illegal or unconstitutional prior attempt, this attempt to amend the charter is also legally flawed.

“Anyone with a computer and internet connection can run a term search of the charter. However, these proposals lack an understanding of the context of our city’s governing document and applicable state law. I view the primary provisions to be the (tax rate) and (sports venue) proposed amendments. While the first is ‘severable,’ which means we will likely be facing a 3% annual property tax rate when the balance of the language is struck by the courts in event of a legal challenge, if adopted by voters. The sixth provision (on sports venues) is irredeemably flawed.”

“We’ve seen this before – and, as before, Mayor John Cooper is focused on doing the work Nashville needs to thrive,” Cooper spokeswoman Andrea Fanta said. “After stabilizing the city’s budget for the first time in years, the mayor is focused on solving problems – building new schools, investing in our school kids, building a new police precinct, and building more greenways for more livable neighborhoods.

“People certainly have the right to complain, but now is no time to get distracted or be divided – not when 700,000 people are counting on us to get the city’s work done.”

Roberts is proposing to hold the referendum on May 28 or June 14.

Biden’s State of the Union address by States Newsroom March 1, 2022
In Tennessee's first partisan school board elections,… by Dulce Torres Guzman July 18, 2022
Seven states to watch in the 2022 push to restrict voting… by Kira Lerner January 17, 2022