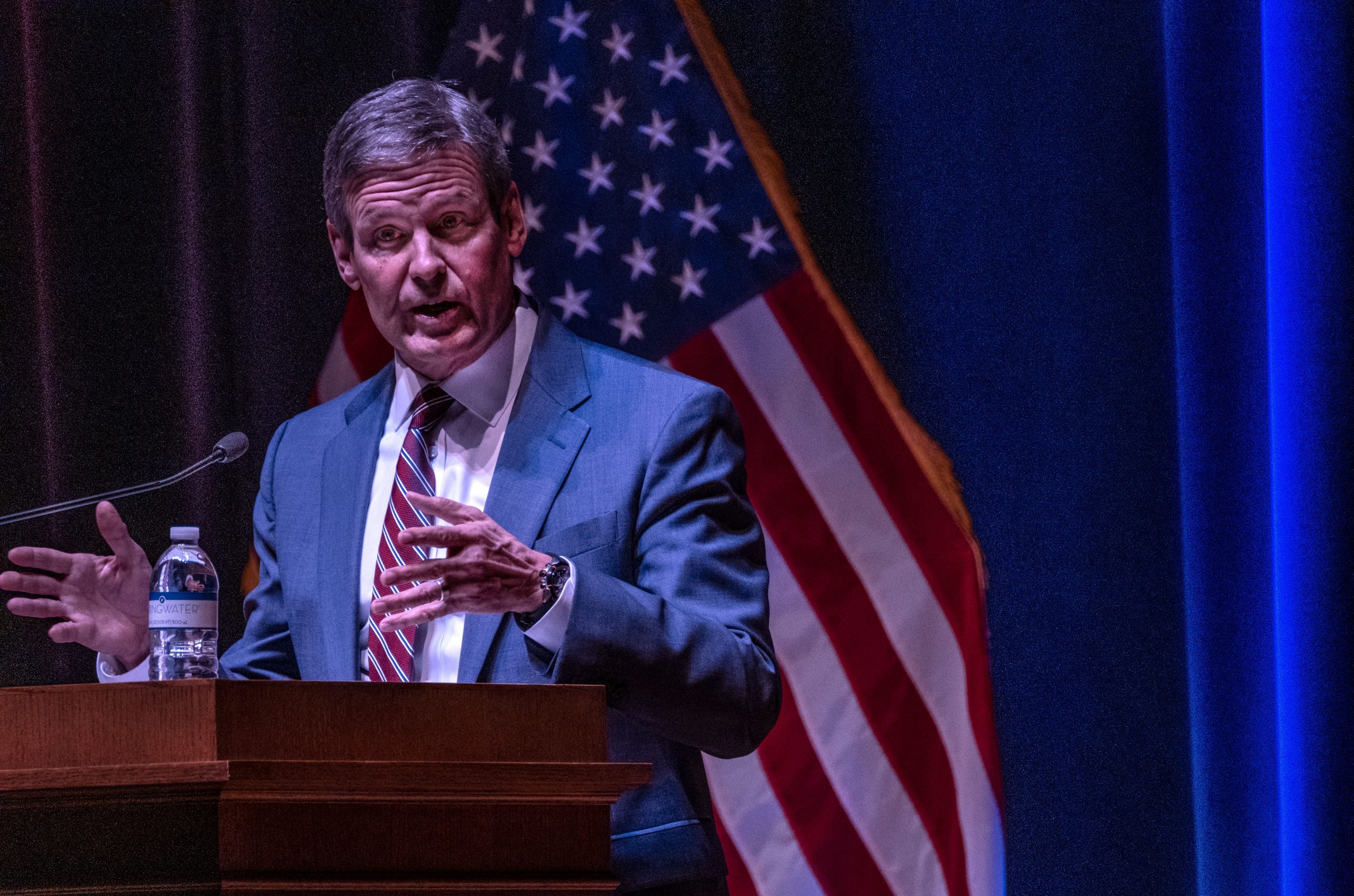 A statewide Tennessee Power Poll shows respondents want our state government to spend more money helping people hard hit by the economy and COVID-19 and whatever else is descending on us these days. Many fewer are in favor of the governor’s proposal to set aside $50 million in these troubled times for our “rainy day fund,” which acts as our state’s emergency reserve fund.

Respondents in this February survey also disagree with Gov. Bill Lee’s proposal to allow people to carry handguns without a permit. Asked for their general impression of Lee’s job performance so far, Power Poll respondents—which are weighted heavily among the state’s big urban areas that count significant numbers of Democrats—view him disapprovingly.

Meanwhile, the business interests among Power Poll’s membership showed their teeth when asked about hiking the state’s minimum wage. While many left-leaning Democrats voice support for an immediate increase in the minimum wage to $15 an hour, the largest number of Power Poll members favor doing so but over several years. A considerable number also think $15 is too high to begin with. (The current federal minimum wage is $7.25.)

Here are the specific questions and responses to the latest Power Poll. (Statewide percentages appear first, followed by Nashville percentages in parentheses.)

In his State of the State speech last week, Tennessee Gov. Bill Lee proposed putting $50 million into the state’s “rainy-day fund,” bringing our emergency reserve funds to $1.5 billion. Some like his conservative approach. Critics say now is the time to be spending. Do you think:

Lee’s supporters are right. Putting money in the rainy day fund is a wise stewardship of our state finances and the bond markets will love us: 27.9% (22.4%)

Lee’s critics are right. This money should be spent on people hard hit by COVID and the rough economy, in areas like healthcare, childcare, and more: 66.5% (71.1%) 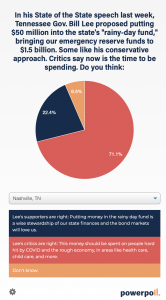 Also in his speech, Lee said he would move forward with legislation allowing people to carry handguns without a permit. Regarding such a proposal, are you: 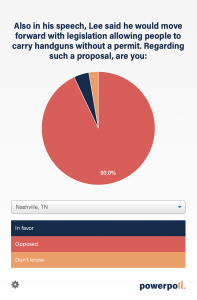 What do you think of our governor’s job performance in general? 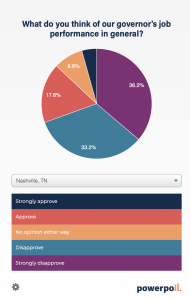 And now, a question that could affect tens of thousands of employers and employees in Tennessee. The federal minimum wage is $7.25. A measure winding through Congress would hike that to $15 an hour. Do you: 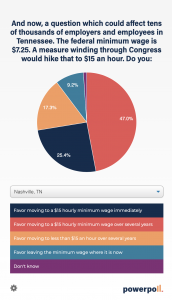 The Power Poll is not a scientific survey. It is a non-partisan poll taken of the most powerful, influential Tennesseans in the public, private, and non-profit sectors. Its answers provide a wealth of insight into how those who make many of our most important policy decisions, and guide our civic discussions, fall out on the most critical issues of the day

To state the obvious, our state government at both the executive and legislative levels is very conservative. And yet when you look at our four major cities (Memphis and Nashville in particular, but also Knoxville and Chattanooga to a lesser degree), you see something politically and culturally much more moderate if not outright Democratic. An urban-rural schism in the state is alive and well.

That Bill Lee is seen so disapprovingly among Power Poll members is Exhibit A of that rural-urban divide. Nearly 60% of the total respondents checked the “disapprove” or “strongly disapprove” boxes with regard to his job performance. The governor’s hands-off approach to requiring masks certainly irked a lot of urbanites. It doesn’t take a genius to walk down the streets of one of Tennessee’s major cities and notice the prevalence of mask-wearing compared to what one sees in a smaller community.

The arguments between Lee and our urban areas have come into focus on education as well. Lee recently publicly chastised school leaders in Memphis and Nashville, when he called for both school districts to get their students back in the classroom. No more virtual learning, he demanded. Nashville and Memphis, which account for nearly one-fifth of the total public school population in the state, didn’t take kindly to the governor’s orders.

The rural-urban differences go on. In the presidential race, as far as one can tell, Lee has certainly acknowledged that Joe Biden is president, but there’s no question as to whether he fell in the pro-Trump-stolen-election-camp or the other side. He was definitely not with the other side. Ergo, further differences with urbanites.

Pushing pro-gun legislation will do him no favors either. An astonishingly high 84% of Power Poll members say that they oppose Lee’s proposal allowing people to carry handguns without a permit. Only 12% are in favor.

The question we asked regarding the so-called “rainy day fund,” which acts as a large reserve fund in case of fiscal calamity, was in response to Lee’s announcement to place $50 million more in the fund. Such a move has its defenders. To maintain the state’s robust bond ratings, cash reserves are viewed positively. As well, the state is legally required to place 8% of its projected revenues into reserve. This $50 million, however, is higher than required and will bring the rainy day fund total to approximately $1.5 billion. Combined with the more than $700 in an unrelated fund for needy families that the Lee administration has been sitting on, the $50 million allocation didn’t sit well with critics who feel as if it’s time to be helping the less fortunate. If these are not difficult times, when would be a time that better qualifies?

Most Tennessee Power Poll members (64%) think the $50 million should be spent on healthcare, or housing, or childcare, or something to help others in need.

Nonetheless, I want to here quote Justin Wilson, the state’s Comptroller Emeritus who knows these numbers better than anyone. He left a comment in the Power Poll survey questioning the rationale behind the rainy day question: “Question 1 has a false assumption. The opinions concerning the rainy day fund do not break down on a Lee supporter/critic line. Moreover, a significant number favor a larger contribution. Government Finance Officers Association (GFOA) recommends a 2-month reserve. Gov. Lee is proposing a little more than 1 month.”

Finally, we asked about the minimum wage. A number of different proposals have been made in Congress regarding a minimum wage increase. The highest number of votes in the Power Poll survey was for a move to $15 an hour over several years, from the current federal floor of $7.25 an hour. As if to demonstrate that Power Poll is not just a bunch of wooly-headed liberals, a significant number (30%) said they would favor an increase to a minimum wage less than $15 or they would favor leaving it like it is at $7.25.

All of which goes to show that when it comes to meeting a payroll, as obviously a lot of Power Poll members do, it’s sometimes damn hard.

Power Poll Statewide: We Should Be Spending Money, Not Putting It In Rainy Day Fund

In General Assembly, bill to allow gun carry without a permit...