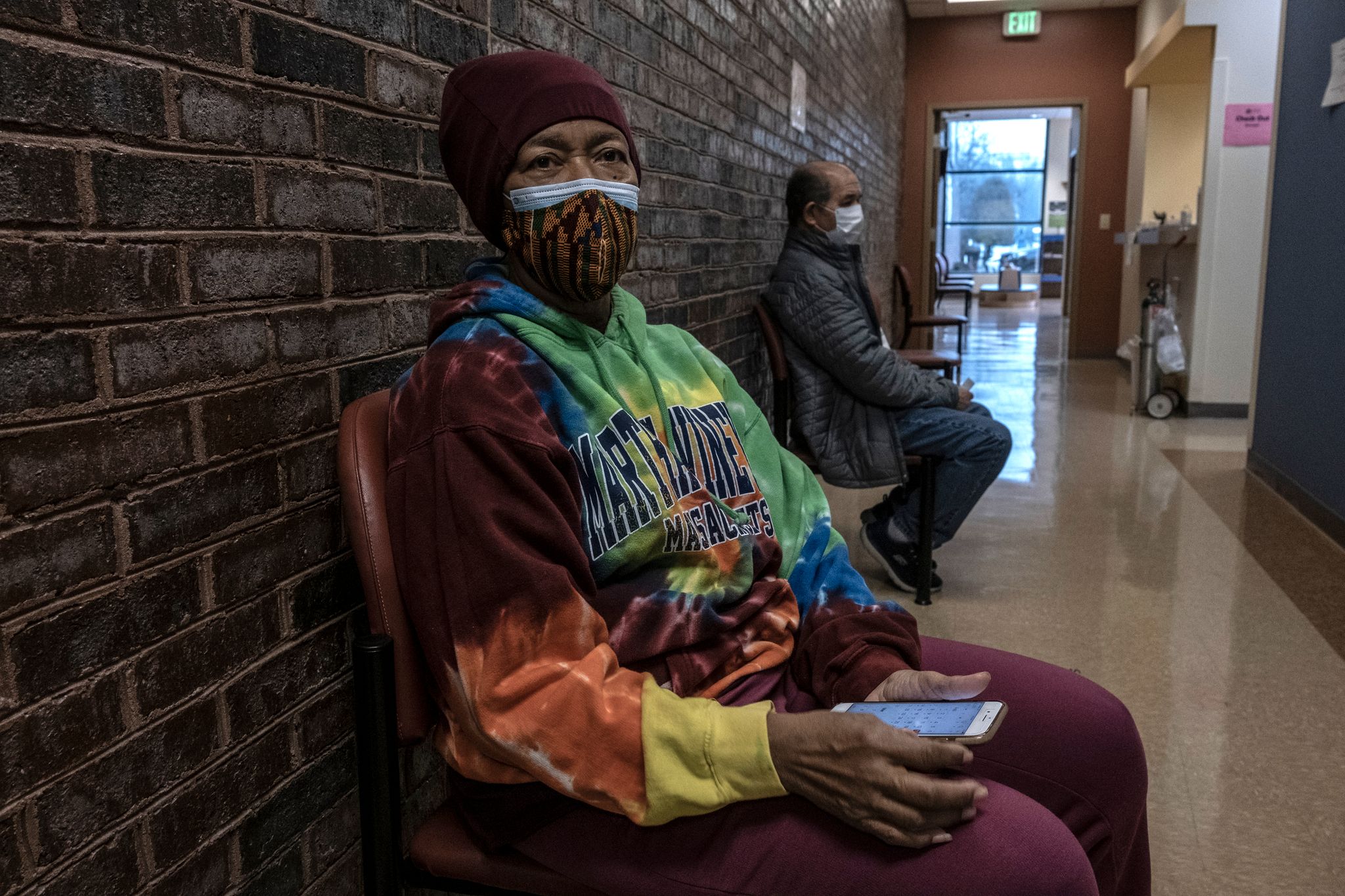 Over the past decade, Patricia Carswell, 73, and James Burroughs, 84, forged a friendship as neighbors, each living alone in separate studio apartments in a Nashville high rise building for low income seniors.

The pandemic has been tough on both of them. Burroughs can no longer spend his days in the game room, where he’d sit in a chair — oxygen tank at his feet — and chat as people came and went.  Carswell said she misses shopping trips and cooking for visiting family. The building has been closed to visitors since March and all of its communal spaces have been cordoned off. They spend much of their time with each other now.

So when a social worker called residents about signing up for a COVID-19 vaccine, Carswell and Burroughs weighed their decision together.

“We talked each other into it,” Carswell said last week, sitting next to Burroughs in the waiting room of Neighborhood Health in Madison before getting their first shot of vaccine. “I was anxious about it. He calmed me down.”

Burroughs said he was “secretly nervous,” too. “I didn’t tell her that,” he said.

The duo, who are both African-American, were among about 30 people to get their vaccines at Neighborhood Health on a Saturday morning. Neighborhood Health clinics are part of the city and state’s efforts to expand the availability of vaccines to people of color, immigrants and marginalized communities who qualify by age or health condition.

Sixty percent of all vaccines administered thus far in Davidson County have gone white residents, while Black residents have received 14% of vaccines and Hispanic residents just 2%, according to data from the city’s health department. The city is 64% white, 27% Black and 11% Hispanic, according to Census data.

Statewide, African-Americans represent just 6% of all Tennessee residents vaccinated, while Hispanic residents are less than 2%. More than 77 percent of vaccines across the state have gone to white residents. Tennessee is 78% white, 17% Black and 6% Hispanic.

Reaching underserved communities is a labor intensive undertaking that, in Nashville, has required the involvement of a handful of clinics for low income, uninsured residents, WeGo, metro’s transit agency, the Metropolitan Development and Housing Agency, community groups and the city’s health department.

MDHA has hired a COVID “navigator” to do education and outreach, a job that often requires one on one phone calls to residents of the city’s subsidized housing complexes, coordinating transportation and booking appointments, said Curtis Thomas, executive program manager. As of last week, the navigator had arranged for 58 residents aged 70 and older to get vaccines. There are 479 residents older than 70 in MDHA housing. Some of those may have independently sought vaccines through Metro’s health department, Curtis said.

The clinics, including Neighborhood Health, are receiving just 40 doses each week.

The scale of efforts to date are far smaller than broader vaccination distribution among the city’s hospitals, which provided vaccines first to healthcare workers, then made them available primarily to existing patients.

Thus far, Vanderbilt University has distributed nearly 60,000 vaccines — the lion’s share of all vaccines given in Nashville. Vanderbilt has also begun vaccinating the city’s teachers and educators. Three other hospitals have given out a combined 35,956 doses of vaccine, while Metro Health’s vaccination clinics have distributed 34,003.

“We’d love to have 150 vaccinations per day,” said Brian Haile, CEO of Neighborhood Health. “We want to bring this to scale. But the only entities able to do that right now are those relying on people to sign up themselves — and do it online — and organize their own transportation.”

At Neighborhood Health, when vaccines became available three weeks ago, staff called patients individually, often multiple times, to schedule an appointment, Haile said. Staff arranged for transportation, in some cases driving to patients’ homes to pick them up. They texted patients who had cell phones, phoned reminders for appointments then called no-shows who, in some instances, were picked up by clinic staff because they said they lacked transportation.

Vanderbilt University Medical Center has distributed the majority of vaccines in Nashville, giving out about 60,000. By contrast, clinics like Siloam or Neighborhood Health only get 30-40 vaccine doses per week.

Haile said his clinics deliberately refrained from advertising the vaccine clinics, which are open to anyone — not just their existing patients — citing clinics for low income patients in other cities that saw an influx of white patients they had never served before. They have instead partnered with Conexion Americas, the American Muslim Advisory Council and other groups to get the word out to immigrants and refugee communities about the availability of vaccine appointments to individuals who are not Neighborhood Health patients.

“I have no objection to vaccinating anyone, but our purpose is to put shot in arms of people who are underserved,” he said.

At Siloam Health, which operates two Nashville clinics whose patients are 90% immigrants or refugees, pharmacy students from Lipscomb University have been recruited to assist staff in administering about 40 doses a week for the past three weeks. Like Neighborhood Health, Siloam clinic staff have also reached out one on one in phone calls to schedule appointments.

Amy Richardson, Siloam’s chief community health officer, said she hopes the clinic will be able to scale up to distribute more.  Siloam’s patients come from 80 different nations and speak 70 languages.

“They are more likely to come to a trusted source,” she said.

Thus far, Richardson said the 40 doses per week have been adequate. Immigrant communities skew younger than the current 70-plus age category eligible for vaccinations, she said.