As a Vanderbilt University student studying economics, Jacob Yousief, 21, had very little time for other activities until a fateful 2019 car crash that ended up totaling his Toyota Corolla.

While trying to figure out insurance hassles, Yousief’s buddy enticed him into a risky proposition: get an exotic car for cheap at an auction, he said.  Yousief bought an Infiniti q60, albeit not without needing serious work. But Yousief was not deterred. To save some money, he forced himself to learn the art of fixing up a car, because “why pay someone else to do it.”

Fast forward to today, Yousief is now a part-time Vanderbilt student  and a full-time owner of a Mustang GT, an Infiniti G37 and a Nissan 370z. He considers himself part of a new generation of Nashville car enthusiasts, and like many others, Yousief took to taking his passion to social media, amassing more than 1,000 followers eager to see his recent upgrades. On occasion he sells his car projects, but otherwise receives revenue from sponsors.

The announcement Friday that NASCAR is returning to Nashville turned the spotlight on the city’s car culture, which is experiencing a resurgence in every aspect from dangerous street racing to events that give drivers a safe avenue to show off their skills.

Car culture has been a part of Nashville as early as 1904, with “horseless” carriage races on land that is known today as the Fairgrounds Speedway.  Throughout the mid-to-late 20th century, Nashville saw the rise of competitive racing and hosted numerous NASCAR competitions, such as the 1959 NASCAR Grand National race. Future talented drivers flocked to racing divisions held at the fairgrounds, including future NASCAR legends Bobby Allison, Donnie Allison, and Darrell Waltrip.

In 2011, efforts began to preserve Nashville’s fairgrounds as the site of one of the nation’s oldest race tracks. Car culture had declined in Nashville as car events and major racing competitions had moved away from the city. NASCAR held its last racing series at Nashville’s racetrack in 1984.

Ronnie Campbell is part of an older generation of racers and race enthusiasts. As a 15- year race-car driver at the fairgrounds, he’s watched how car culture has evolved in Nashville into different segments, with West Nashville is known for older-style hotrods and South Nashville being known for Japanese import cars.

Therein lies the problem with some car enthusiasts, according to Campbell, when two guys driving a 200-mile-an-hour deadly machine want to know who’s faster on public roads with unsuspecting average drivers.

“I’ve learned it’s too dangerous, it’s not worth it,” said Campbell. 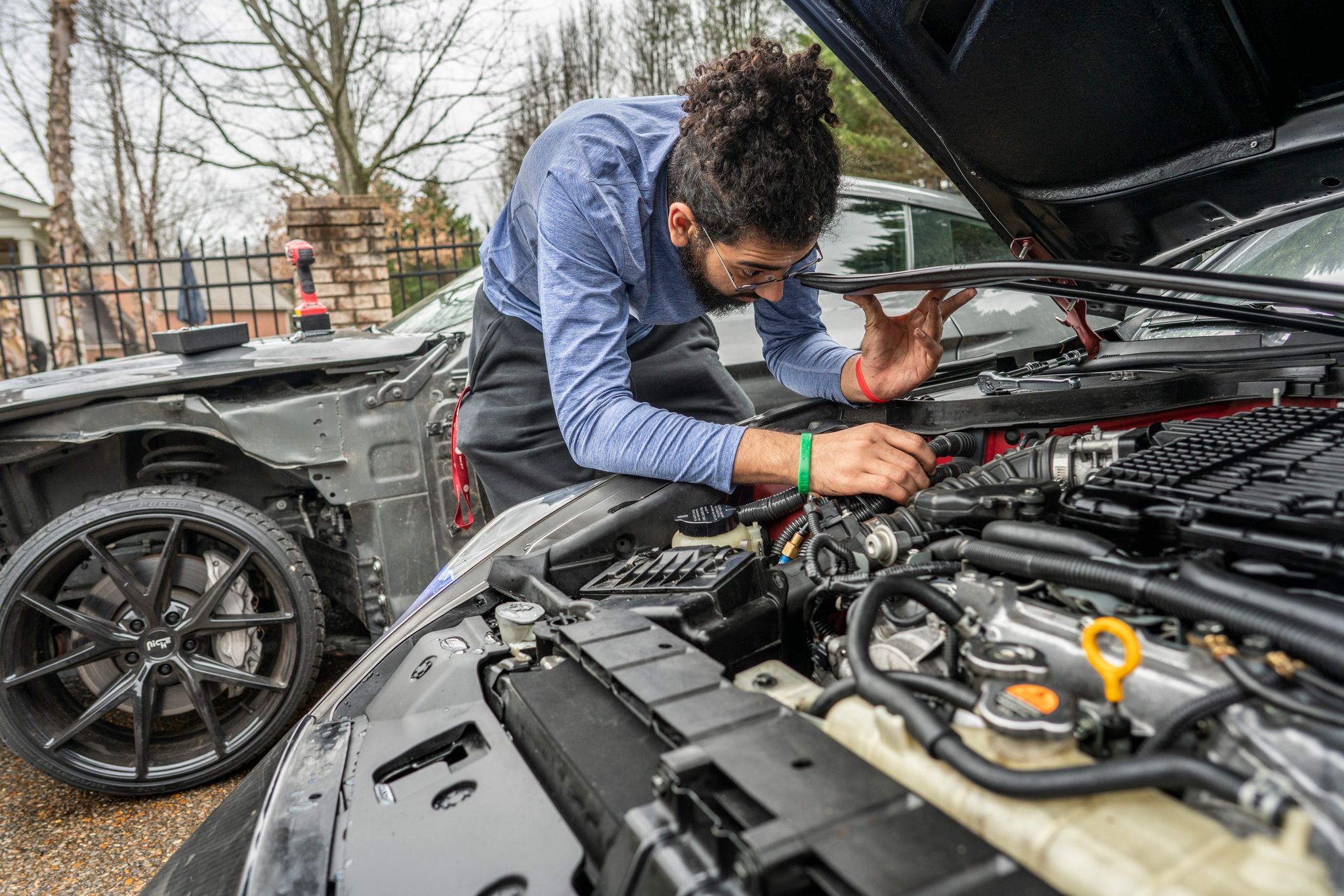 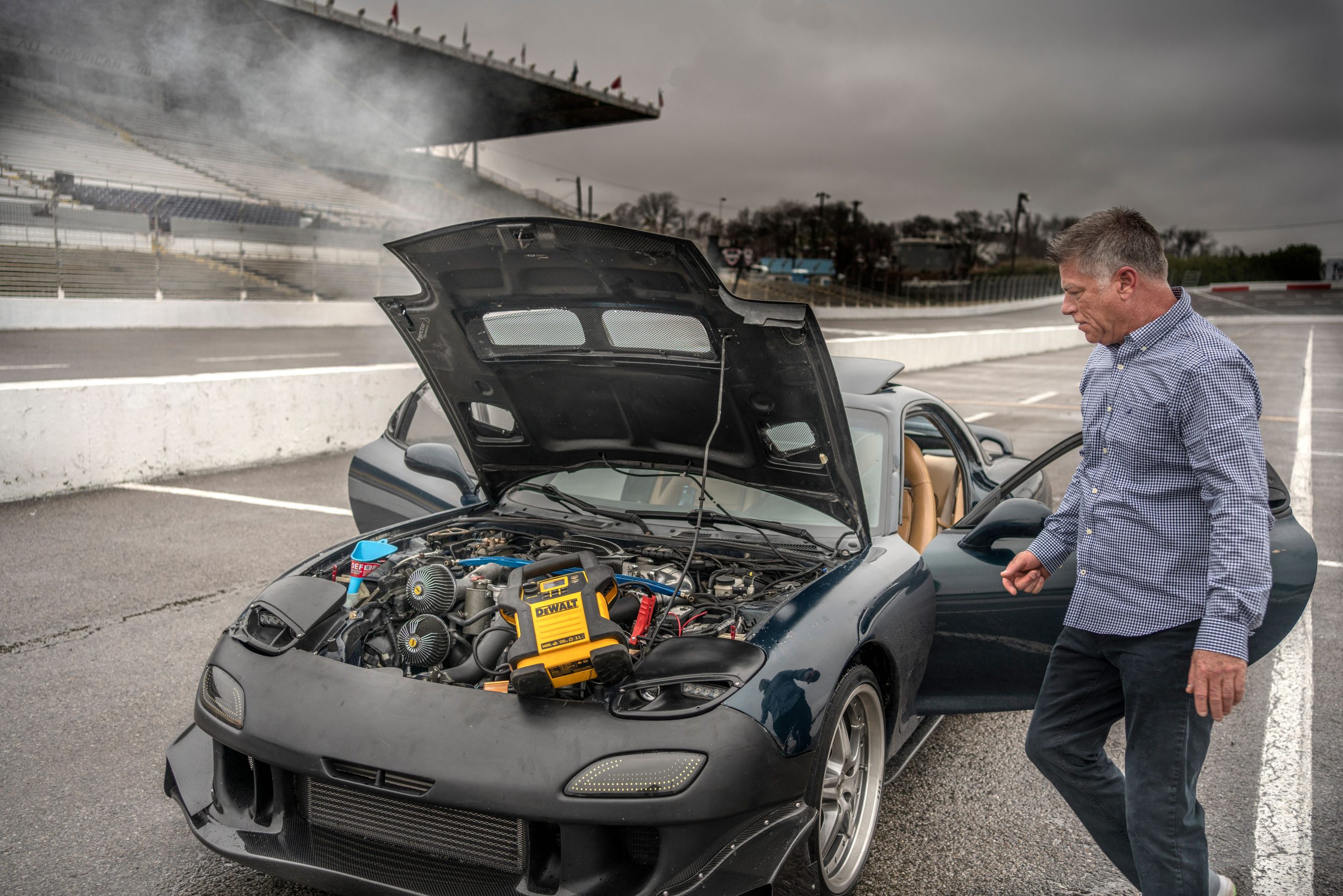 Campbell shows off what’s under his hood. (Photo: John Partipilo) 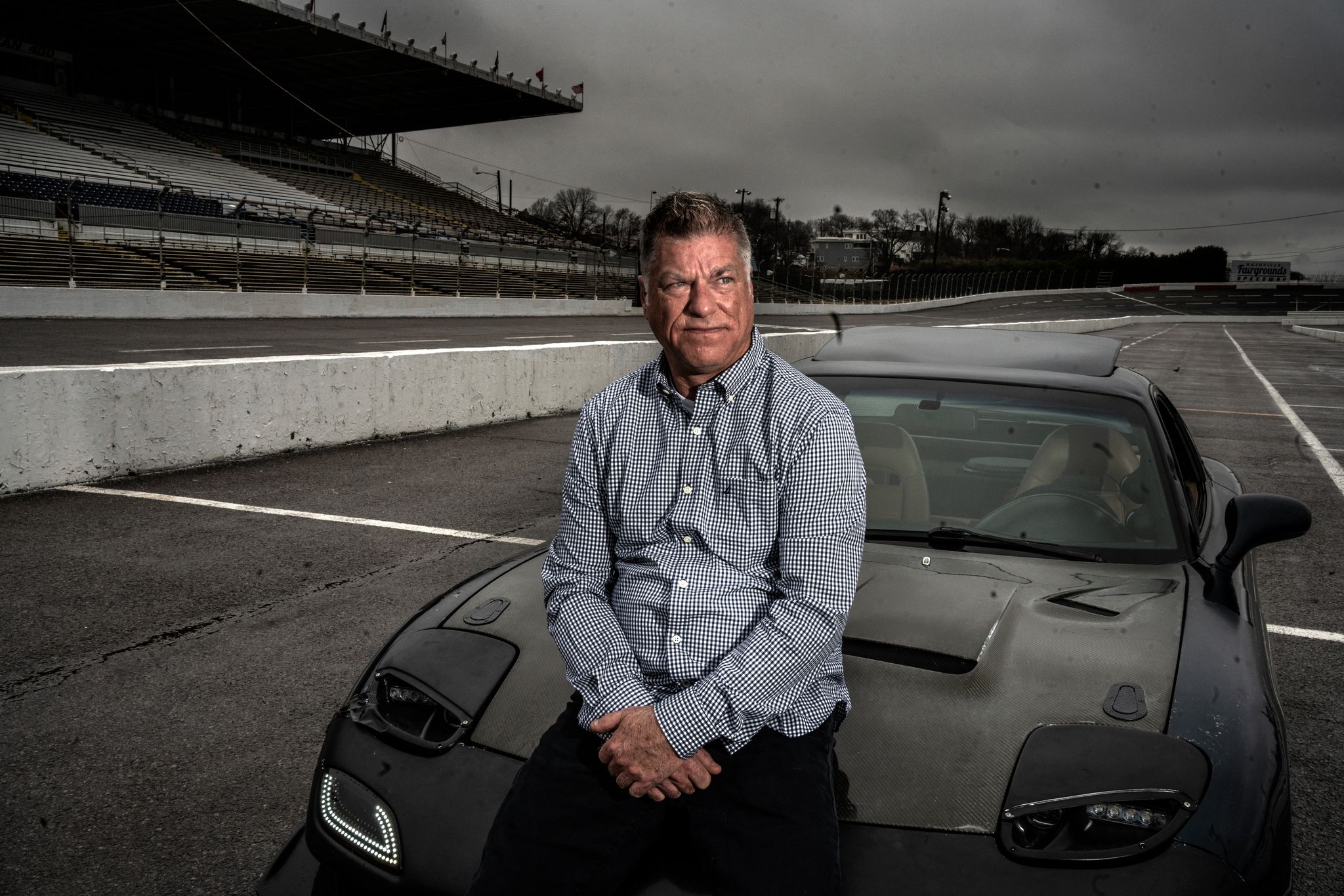 Ronnie Campbell in front of the grandstands at Fairgrounds Speedway: being on the track, he says, is safer than street racing. (Photo: John Partipilo) 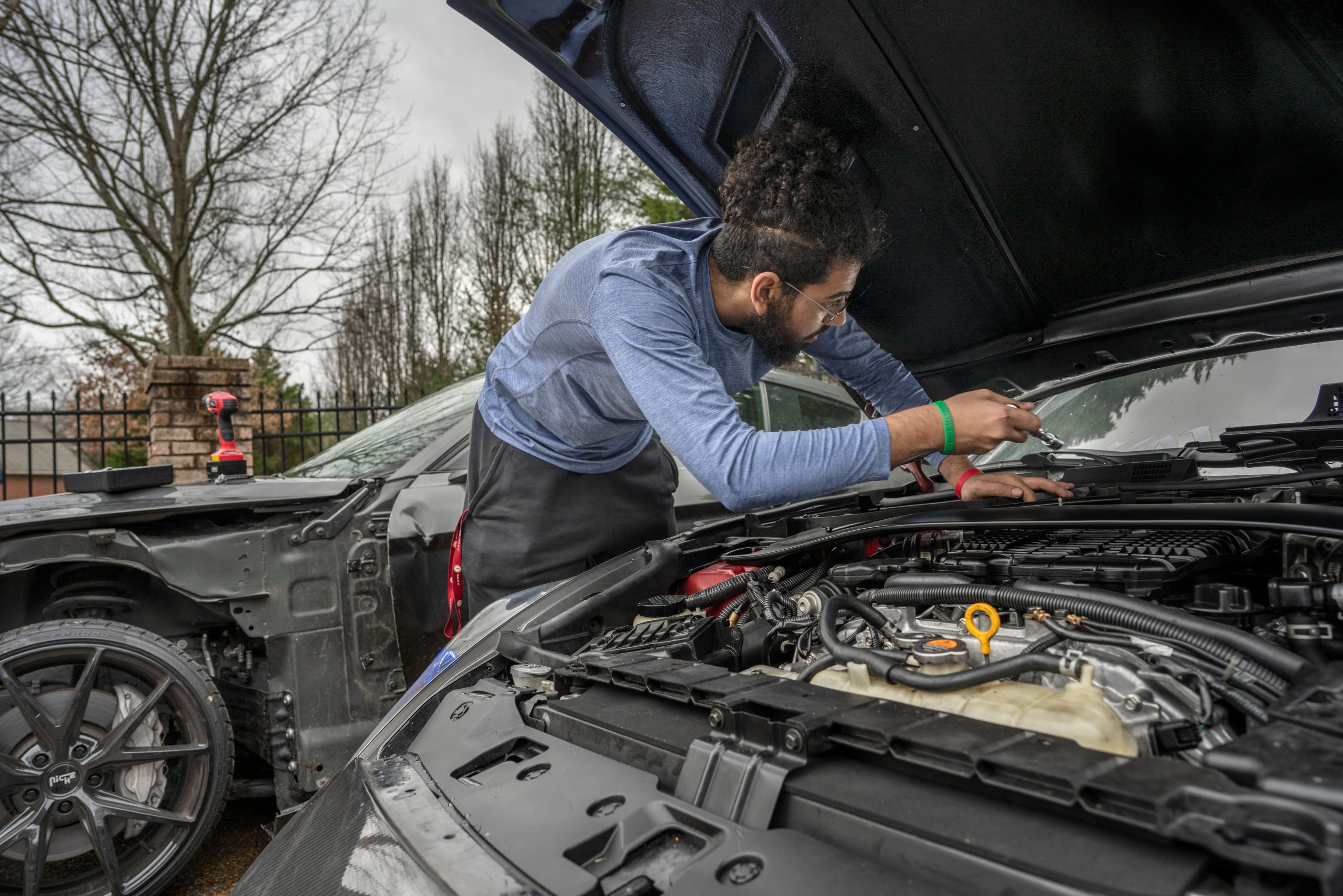 Yousief makes adjustments to the engine of one of his autos. (Photo: John Partipilo)

Police have seen a rise in this type of reckless driving, often called drag racing, over the last year. When police were  preoccupied covering the Black Lives Matter protests in downtown Nashville  drivers took advantage of the distraction. The Metro Nashville Police Department then assigned police officers specifically to deter drag racing.

In 2019, racers blocked sections of Interstate 24 doing “doughnuts” in the middle of the highway and causing traffic to back up. On other occasions, drag racing activities led to severe or fatal injuries.

“There’s nothing positive that comes out of this. Everything that results from these races is negative for everybody,” said Gilliland.

Police have also received complaints about large mufflers loud enough to “wake up the whole neighborhood,” he said.

Metro Councilmember Joy Styles has been a proponent of legislation to deter street racing, adding that she constantly receives complaints about it. In October she proposed installing license plate readers (LPRs) in areas known for racing but ended up withdrawing the bill.

Her proposal received backlash from the Black and Kurdish communities that said the LPRs would unfairly be targeting their community members. Kurdish parents have been reluctant to call the police on racers since many were teenagers and parents feared police interactions, according to Lydia Yousief, director of Elmahaba, an Arabic community group.

Styles acknowledged concerns about surveillance and privacy and plans to hold public hearings in April with communities about possible amendments, considering LPRs can be used for a multitude of reasons, such as Amber Alerts and finding stolen cars.

To concerned parents of drag racers, she asked that they talk to their kids about the dangers of illegal street racing and “tell them to find something else to do.”

Police have made attempts to be one step ahead of car clubs by gathering intelligence surveillance, which is tricky when racers are quickly able to escape the area beyond the police’s ability to give chase.

Confiscation of cars in street altercations has also proven to be effective, according to Campbell. Police recently released pictures of confiscated vehicles, some worth an upwards of $70,000, now collecting dust in Metro’s impound lot.

Drivers have the ability to go to court in order to retrieve the vehicle. More often than not, the lienholder of the vehicle is the dealership where the vehicle was purchased and drivers were still making payments when the vehicle was confiscated. Dealerships may state that drag racing is a breach of contract, forcing the driver to lose the vehicle or to pay fees to get it back, said Gilliland.

Campbell has noticed that many drag racing vehicles, such as Dodge Challengers, were bought from dealerships as they are manufactured to be capable of high speeds versus someone who has put hours into improving their vehicle.

“The guy that worked on it will take a lot more pride, a lot more care, and he’s probably going to drive it differently too,” he said, adding that knowing how much time and effort was put into a vehicles, there’s no way they’re going to risk losing them in a street race.

Competitive racing gives drivers an appropriate venue to show their love of cars.

The Nashville Superspeedway scheduled to host its first NASCAR Cup Series race on June 20 and the Music City Grand Prix, hosted by Indycar to promote motorsports, is scheduled for August in Downtown Nashville.

“It’s a lot more enjoyable when you know there’s no worry about the police, you’re actually competing against guys in your own division and it builds the camaraderie,” said Campbell.

“A lot of car guys, they just want to hang out and show off their cars. You can do that at the racetrack,” he added.