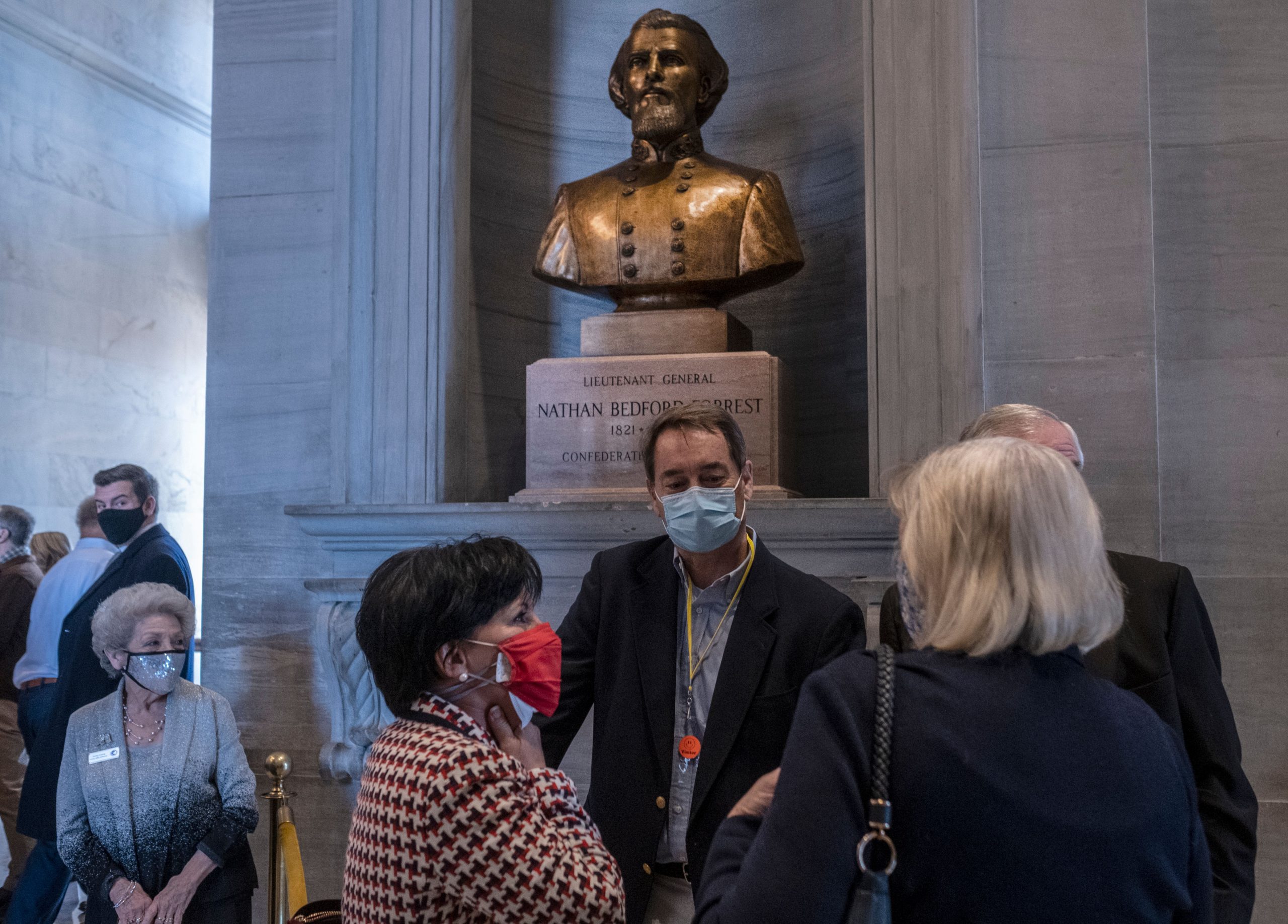 Hearing overwhelming support to move the Nathan Bedford Forrest out of the State Capitol, the Tennessee Historical Commission voted Tuesday to relocate the embattled statue to the State Museum.

After a 25-1 decision, the bust of the Confederate lieutenant general will be moved with U.S. Admirals David Farragut and Albert Gleaves as part of a request by the State Capitol Commission for creation of a Hall of Heroes.

Lt. Gov. Randy McNally and House Speaker Cameron Sexton have requested an opinion from Attorney General Herbert Slatery on the process for moving the busts. McNally prefers the bust remain in its location and historical context be added.

“Regardless of his personal preference, he has always been adamant the law be followed. That does not appear to have happened here. Despite being advised by the two speakers that the State Building Commission must concur in the Capitol Commission’s waiver request, the Historical Commission proceeded contrary to law. Additionally, there is a dispute over whether statute gives authority to the Legislature, rather than the Capitol Commission,” said Adam Kleinheider, spokesman for McNally.

“From the beginning, the goal has always been to follow the process and requirements laid out in current law related to the removal of an historical monument or statue under the Heritage Protection Act. In working with Lt. Gov. McNally and the legislature, Speaker Sexton feels like we have conveyed our thoughts and the correct direction moving forward,” said Doug Kufner, spokesman for Sexton. “While the Historical Commission has decided to proceed on this matter with today’s vote, we await Attorney General Slatery’s guidance to ensure this process has been precisely and lawfully followed.”

The commission, which took up the matter last October, voted to move the bust as part of the Tennessee Heritage Protection Act, with only Joanne Moore, who disputed definitions of the Confederacy’s “lost cause,” voting to keep the statue in the Capitol.

Commissioners found “compelling evidence” and demanded removal of the bust to the museum where a full context of Forrest’s life can be displayed as a Memphis slave trader, military leader, commander during the Fort Pillow Massacre and early leader of the Ku Klux Klan.

The commission heard from dozens of Tennessee residents who called for removal of the statue, which is perched near one of two elevators on the second floor of the State Capitol where House and Senate chambers are located. Only a couple of people requested the bust remain in the Capitol niche.

Eley pointed out the governor said “symbols matter” and provide a “window” into the views of a people.

“It’s clear to me the bust is a stark reminder of the pain it has caused for African Americans,” Eley said.

The commission heard testimony from MTSU history professor Derek Frisby, who gave thumbnail explanations of Forrest’s life and answered questions about the controversy swirling around him for more than a century and a half.

Frisby explained that busts of Forrest and other Confederate soldiers and leaders are part of the “lost cause” mythology that seeks to “remove slavery as a stain on the Southern cause in which they fought.”

During the online meeting, Historical Commission member Joanne Moore tried to object to Frisby’s definition of the “lost cause” but was told by Administration Judge Kim Summers she would need to wait until deliberation to make her claim.

Frisby acknowledged a “fair amount” of confusion exists about Forrest’s role in the Klan. By most accounts, he was considered its first grand wizard after a vote was taken at the Maxwell Hotel in Nashville after the close of the Civil War.

Some commission members pointed out other men were considered the KKK’s first grand wizard, but Frisby said there is no doubt the Klan used Forrest’s name for recruiting purposes. Similarly to any “terrorist organization,” the Klan was divided into many cells, the history professor said.

Much of the discussion centered not only on Forrest’s position as a slave trader but his role as commander during the Fort Pillow Massacre when dozens of U.S. Colored Troops were slaughtered as they surrendered and begged for mercy. Many white U.S. soldiers were killed too, but a disparate number were Black, in part because they were stationed outside the fort to be a first line of defense after Forrest threatened to give “no quarter.”

Commissioner Moore pointed out U.S. Gen. William Sherman did not find Forrest culpable at Fort Pillow and determined he deaths were the “result of warfare.” Further, she said Sherman called Forrest the “greatest general” of the war.

Frisby, though, said he felt the State Museum would be the best location for the bust.

The vote to move the statue came even though State Museum Executive Director Ashley Howell said the busts probably would need to go in the Tennessee War Memorial military branch museum, which has had some problems with humidity conditions. The space is slated for renovation.

Howell told commissioners the “full story” of Forrest’s life will be made part of the exhibit, including his career as a slave trader, military leader and life during Reconstruction.

During a public comment period, one Tennessee resident Larrick Johnson described the difficult circumstances of Forrest’s early life and how, when he became a slave trader, he treated his slaves better than others did, giving them baths and clothing and have 22 African Americans riding with him during the war. Most historical reports show slaves rode with their masters during the war.

Johnson also pointed out that Forrest gave a speech to the Pole Bearers Association, the forerunner of the NAACP, encouraging Black Americans to vote and become productive citizens. On his death, some 300 African Americans attended his funeral, according to Johnson.

Those calling for removal discounted those as the apologies of a man who knew he was wrong throughout his life.

Robert Jackson reminded commissioners the Confederate flag was carried into the U.S. Capitol during the Jan. 6 insurrection, further proof of the Confederacy’s “cornerstone” of white supremacy.

“If it is not clear we need moral clarity on this issue, by God I don’t know what will get it through our minds,” Jackson said.

Angel Stansberry told the commission that Moore should recuse herself from the vote because of her beliefs as a Confederate sympathizer, even though her removal would not make a difference. A two-thirds vote was required for removal.

“Forrest is less a history of Tennessee than an avatar of the lost cause,” Sharfstein said.

TSU professor Learotha Williams Jr. summed up the feeling of most members of the public who spoke to the commission, saying Forrest “victimized” many of the people he knows and loves today.

Looking back at Forrest’s life, Williams said, “I see death on a personal and spiritual level occurring day after day after day in Memphis.”