In the first week after the World Health Organization declared the COVID-19 outbreak a global pandemic, the number of calls coming into a Tennessee child abuse hotline fell by more than a third.

It was the beginning of a trend that persisted throughout 2020, alarming child welfare officials and child advocates who feared that fewer reports did not mean there was less harm suffered by Tennessee children. They signaled, instead, that child abuse and neglect was happening unseen and unreported as children stayed out of school and out of sight of responsible adults who could intervene.

Now that trend is beginning to reverse, said Carla Aaron, assistant commissioner for the Office of Child Safety at the Department of Children’s Services.

In the first two weeks of March, 4,677 reports of child abuse were called into the department’s hotline, surpassing calls for the same time period in pre-pandemic 2019 by more than 300.

“As kids get back into their communities and are starting to be seen and interact with people in churches, schools, sports,” Aaron said, “We’re going to see more.”

The data on how the pandemic affected the severity and the frequency of abuse and neglect experienced by children is only just emerging nationally.

Reports of child abuse made by pediatricians, teachers and social workers dropped between 20% and 70% over the course of the pandemic across the United States, the Centers for Disease Control and Prevention reported.

Hospital emergency rooms saw fewer instances of children being brought in for injuries suspected to be caused by abuse than in 2019, according to the CDC. But of those children who did wind up in the ER, a higher percentage had injuries so severe they had to be hospitalized, the report said.

In Tennessee, Aaron said social workers have noticed an increase in domestic violence and substance abuse in homes with suspected child abuse or neglect. There has also been a greater prevalence of sexual abuse in the more than 58,000 cases DCS investigated last year, she said.

But what has gone unreported weighs on caseworkers. In 2019, the agency investigated more than 76,000 cases through tips from teachers, doctors, neighbors, family members and others to their hotline. In Tennessee, every adult is a mandated reporter — required under law to report suspected child abuse to state or local authorities.

The hardships resulting from the pandemic have placed enormous strains on parents and children, with job loss, isolation, food insecurity and the challenge of remote learning for parents who had to continue to work outside the home and those who remained at home with their children, she said.

While the pandemic has exacerbated some of the circumstances that place kids most at risk for abuse, it has also created new hurdles in both investigating child abuse and neglect — and in taking parents or other caregivers through the first steps in addressing their behaviors.

Counseling services, domestic violence classes and drug programs that parents would have been directed to are now held online if they are available — a problem for families lacking regular internet access.

Social workers, who pre-pandemic were able to interview children at school away from onlooking parents, have had to find ways to speak to children confidentially, sometimes on front porches, driveways or yards.

In some cases, caseworkers have had to rely on virtual discussions with children who were at home with parents suspected of child abuse or neglect, she said.

“It’s not the best or optimal, but we have to assess if the child was safe,” she said.

The routine inspection of homes in suspected abuse cases — peering into a child’s bedroom to see if it is clean and comfortable, opening fridges and cupboards to see if there food in the house — has also, in some cases, gone virtual, with caseworkers asking parents during video calls to give a virtual tour of the home.

Aaron, who has worked at DCS for 36 years, said she expects the lingering effects of the pandemic will be continue to impact the work of child abuse investigators in the months to come.

“We’re going to have to figure out the long term impact of trauma,” she said. 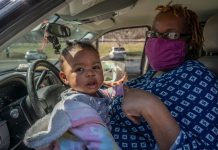 Housing may be key to high infant mortality numbers in Tennessee

Reports of child abuse in Tennessee plummeted last year. That trend is beginning to reverse.