Nashville Power Poll members are giving Mayor John Cooper some mediocre grades. Depending on how you look at it, he comes out with a B- or C+. Passable. But nothing to write home about.

Meanwhile, former Mayor Megan Barry, who as we all know left office in a cloud of chaos three years ago, is seen by about half of the Power Poll as having no political future. That said, a strong 37% said she does have a future. And the remainder (13%) say they “don’t know.” Essentially, if our former mayor were able to do a little convincing of the “don’t know,” she will have achieved pretty solid political rehab.

Finally, Power Poll asked members about the possibility of Republicans dividing up Nashville’s congressional district in upcoming congressional reapportionment. After the census, the state Legislature, which is dominated by Republicans, will redraw what is mostly a Nashville district, one dominated by Democrats. Power Poll members were all over the map, with almost equal numbers saying Republicans would, or would not, divide up the district to weaken the likelihood that we remain a Democratic district. Nearly three in 10 respondents felt they couldn’t predict what Republicans would do.

Here are the specific questions and numerical responses to this month’s Power Poll:

Let’s grade Nashville Mayor John Cooper’s job performance since assuming office in September 2019. What grade would you give him? 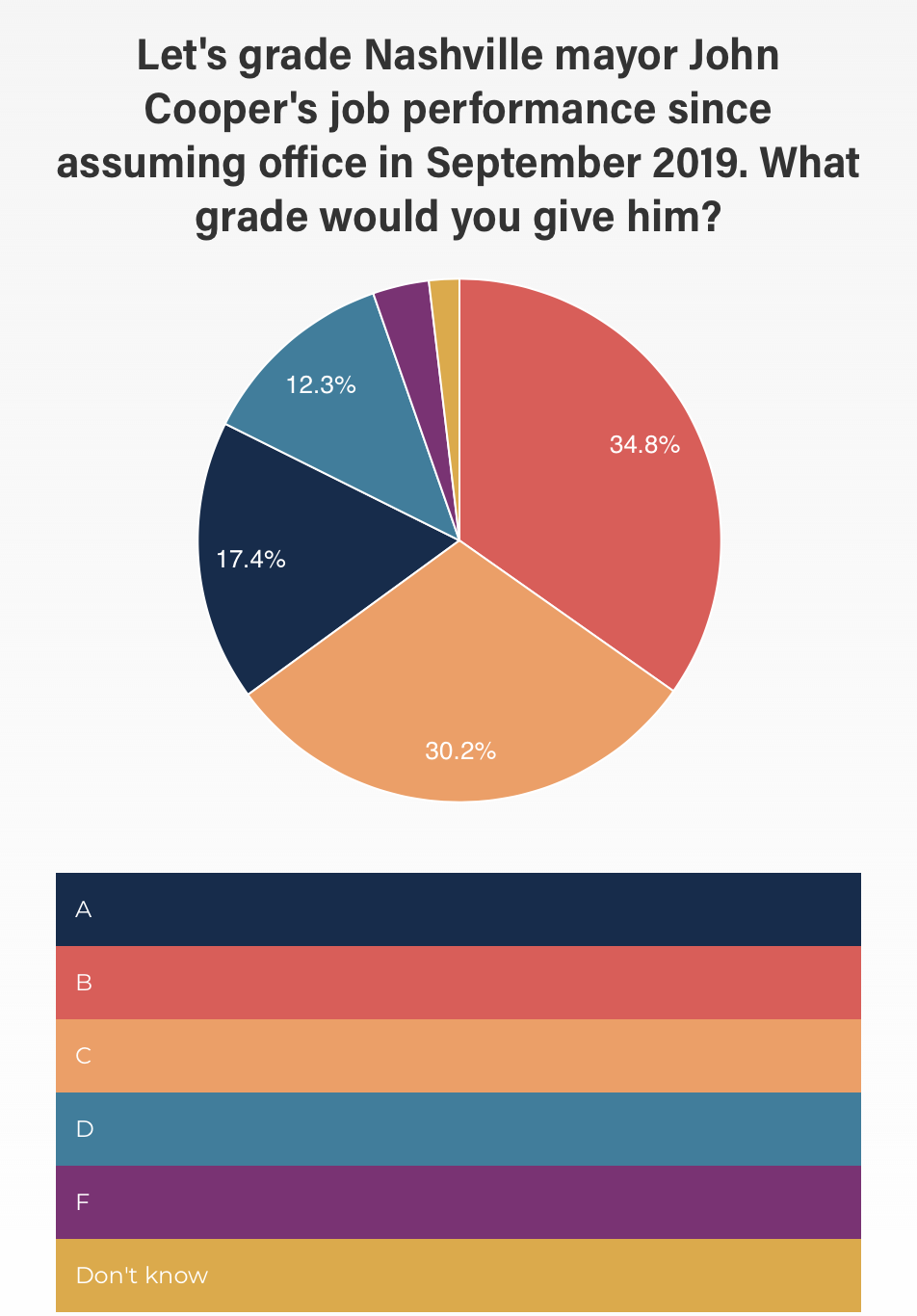 Our low-profile former mayor, Megan Barry, briefly made news last week as her theft charges were expunged from all court records. Do you think Barry could have a successful political future ahead of her at some point in time? 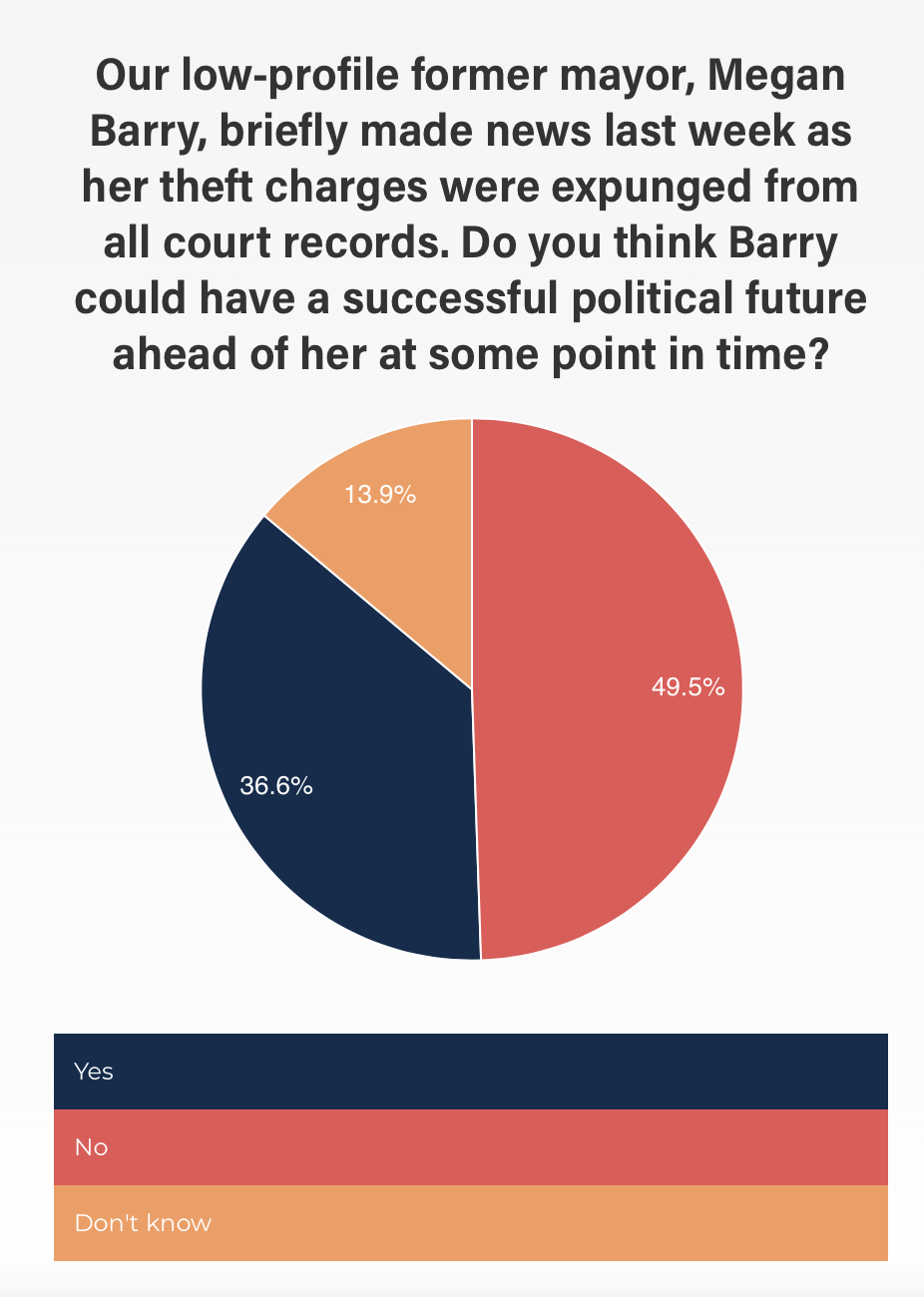 Put on your prediction hat. The Republicans in the state Legislature will, in the not-too-distant future, redraw Tennessee’s congressional districts. District lines will be based on the 2020 Census results. It is possible that Republicans could carve up Nashville’s mostly Democratic 5th congressional district into multiple pieces, merge them into heavily Republican districts surrounding us, send Democrat Jim Cooper into oblivion, and cause Tennessee to lose a Democratic seat in Tennessee. Will this ultimately happen? 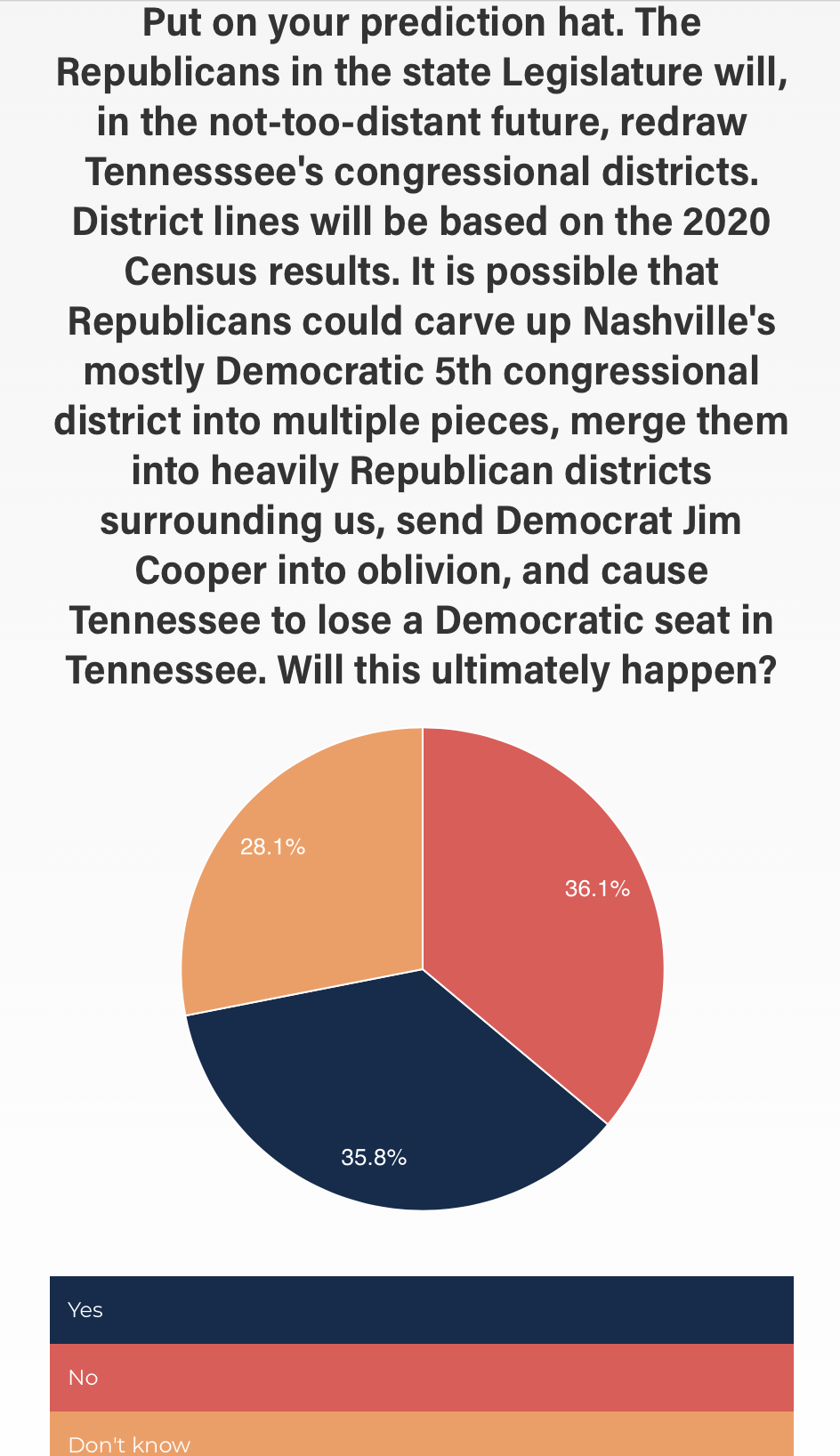 As we all know, the Power Poll is not a scientific poll. At Power Poll, we gather together the influential, powerful, significant players here and then we ask them questions. We do that once a month. Power Poll members also post comments about the question being asked and elaborate on their positions. The answers to the survey and the subsequent dialogue are often instructive and helpful to those who seek to advance the city forward. The Power Poll is non-partisan.

A total of 697 Power Poll members were sent the survey and 367 (or 52.65%) responded. All voting is anonymous. To look at the member list, click here.

COVID, the tornado, bad financial numbers, a Christmas-day bombing—any one of those would be tough for a city’s mayor to handle, but Cooper has had all of this, and more, on his plate. It’s been his job to lead us through it.

To be blunt, Power Poll members give him only slightly-above-average grades. A couple of thoughts here:

Is he politically vulnerable? That brings us to…

I hollered at Megan to let her know I wanted to ask her about her Power Poll numbers.

Having entered into a conditional plea to a felony theft charge that has now been expunged, and having had a scandalous affair with her personal bodyguard before she resigned from office, I thought her Power Poll numbers were pretty strong.

Megan had prepared a statement with regard to the Power Poll, which reads as follows:

“I don’t really know if I’ll run for office again and I don’t think it matters if I have a future in elected office. What matters is if the issues I care about have a place in future elections with future candidates. Those issues haven’t changed. They have only become more stark in their necessity: social justice, equality, access to housing, education, transportation, jobs and the out-of-control substance use crisis, just to name a few. And if I do run again, I’ll look forward to convincing those folks who don’t believe I have a future to vote for me. After all, that’s what I’ve done every time I’ve run.”

She doesn’t rule it in.

She doesn’t rule it out.

Doesn’t take a genius to go out on a limb here and conclude that of course she would be looking at running for something. That’s how these political actors operate. And with the city fathers and mothers having put Cooper in what amounts to a civic time-out, it’s only natural that she would be monitoring the next mayor’s race as it develops. (It’s not until 2023.)

I’m into this story.

She would have real problems raising money for a race. But she also had the same problem in 2015, raising under $1 million before laying waste to the likes of Bill Freeman, Charles Robert Bone, and others who were shelling out millions. In any future race, she would have trouble raising money once again. But it may not matter. She’s got precedent here for taking the small-donor, grassrootsy path.

One political type described her to me recently this way: “She’d be the warm blanket we’re all looking for.” There’s her gregariousness, her warmth, and the je ne sais quoi that a woman brings to a political office. These play in her favor, particularly when you consider the personality profile of the incumbent.

Consider also: She’s still got a lot of people who think she did some very bad things, both on the left and right, and she’d have work to do.

We all crave stories of redemption and resurrection. Political comebacks are page-turners. Everyone should be watching Megan closely. She is 57. Clock is ticking. She knows that.

Here’s the nightmare scenario for Nashville Democrats, and pretty much the city:

The Census figures come back. The Republicans in the Legislature open them up and then set about redrawing all of the congressional district lines, just like they’re supposed to every decade. They then take Nashville, divide it up into fourths, and place each quarter slice into a nearby Republican district. The districts absorbing all those Democrats are able to still stay majority Republican. The math works. Thus, a Democratic seat in Congress gets eliminated. Democrats cry, Republicans rejoice.

As for what I think? I think that if you’re a Republican congressman, you really don’t want any more Democrats moving into your district. Yeah, maybe your district is now 75% Republican, 25% Democrat, but why would you want the hassle that comes with becoming 55% Republican, 45% Democrat. You want your seat to be safe. You like job security.

I’d also venture to say that if Republicans in the Legislature do this, there would be quite a bit of stink. It’d be pretty outrageous, even by the standards of the Legislature.

My Opinion: 5th District remains as is.