Like many Nashvillians, Elizabeth Almarez, 27, was eager for life to get back to normal, so she went to Casa Azafran for her first COVID-19 vaccine shot. Despite not having had vaccinations since she was a child, she wanted to reassure fellow members of the immigrant community that the COVID-19 one  didn’t hurt and wanted to serve as “an example.”

“The people in the community need to know that people are doing it. It’s safe,” said Almarez, who is the information and referral liaison at Conexión Americas .

Tennessee public health officials have opened the doors for residents 16 and older to get the vaccine, and while many people don’t mind driving to the Music City Center in downtown Nashville, city officials took a different tactic to make sure vaccine distribution was reaching Nashville’s most vulnerable populations: communities of color.

Early reports in Davidson County showed that white residents were making up a disproportionate number of vaccine recipients and Metro officials admitted that access was a problem. Nashville health officials partnered with immigrant-advocacy groups to get the answer to a central question: how do we get  the COVID-19  vaccines to them?

Starting in March, pop-up vaccination events came to immigrant communities, setting up shop in mosques and community centers.The events were only advertised among members of the target communities and they had a varied amount of success, according to immigrant advocacy groups.

Health officials hosted 12 vaccine clinic events in March and have plans to host 18 more throughout April and May through scheduled appointments.  Events are being held at the heart of different communities of color, including Southeast Nashville, Germantown, North Nashville, Bordeaux and other areas.

On March 11, Salahadeen Center, an Islamic community center,  opened its doors to a long line of people “excited and praying to get the vaccine,” said Nawzad Hawrami, the Imam, or office manager.

The key to gaining the community’s confidence was widespread collaboration with local leaders, who actively used social media to speak about the safety of the vaccine, said Hawrami.

Sabina Mohyuddin, executive director of the American Muslim Advisory Council, emphasized that people were more prone to trust the vaccine because it was being held at the Salahadeen Center, which doubles as a mosque and is located next to several international food markets.

“This is a common place for members. It’s familiar and it’s home,” she said.

Early issues in vaccinating the Kurdish community had more to do with age than with fear of the vaccine, said Mohyuddin. When city officials inquired about why community members weren’t signing up, community leaders pointed out that their numbers skewed younger and weren’t eligible for the vaccine. When people were able to sign up for vaccines, all 200 available slots were quickly filled.

According to data from the Mayor’s Office of New Americans, 198 people were vaccinated that day, but officials have avoided collecting identifying information beyond basic contact information, making it unclear if the vaccines are being administered only to immigrants.

Despite Metro efforts to reach out to communities of all backgrounds, Martha Silva, senior director of economic prosperity at Conexión Americas, said people are still hesitant to receive the vaccine.

The lastest Davidson County data shows only 3.5% of Hispanics have received the vaccine, compared to 15.3% of Black residents and  62% white residents. The Hispanic community absorbed a third of all Tennessee’s COVID-19 cases in the summer of 2020, and currently account for 12% of all active cases.

According to data from the Tennessee Department of Health COVID-19 vaccine county demographics, 5,009 vaccines were administered to Hispanic residents despite numbering 62,000 in Shelby County.

Mauricio Calvo, executive director at Latino Memphis, said the city “is really trying” but there are still logistical barriers to be eliminated, such as improving language lines at call centers informing the public about COVID-19.  Not everyone has technology to access government websites, or even an email, said Calvo, especially if they come from low-income backgrounds.

“The numbers are ridiculously low. We have to do better,” said Calvo, adding that the city has the infrastructure to remove all barriers.

Hispanic advocates in Shelby County report facing the same hesitancy from their communities as Nashville representatives report. Almarez said people are still worried about the safety of the vaccine, believing that it came out too quickly. Many believe that because they have already had COVID-19, they are entirely immune, which is false. According to the CDC, individuals recovered from the disease can still become infected with the virus that causes COVID-19.

“The risks outweigh the fears of the vaccine, and it’s irresponsible to not get the vaccine because they are endangering the rest of the community,” said Calvo.“For the sake of our health, we have to do this. There’s no way around it.”

Still others do not believe in the severity of the disease, and many Hispanic residents still fear having identifying information in the hands of government officials. This fear was reflected by Raul Zuazua, 50, who received his first vaccine at Casa Azafran during a community event.

The city needs to reach out more to undocumented immigrants, according to Zuazua.

Latino Community leaders have actively advertised receiving the vaccine to encourage participation. Yuri Cunza, president of the Nashville Area Hispanic Chamber of Commerce, participated in the Johnson & Johnson vaccine trial and spoke of his experiences. Latino Memphis will be hosting a social media campaign to encourage vaccinations by having people post a picture of themselves receiving the vaccine for a chance to win a $50 giftcard, according to Calvo.

Almarez pleaded to those who have already received the vaccine to speak of their experiences and publicize their vaccination. Only two people in her family have received the vaccine, so Almarez took it upon herself to sign up three other family members. She encourages others to do the same for friends and family.

“Pass the information of where they can receive the vaccine so they will go. Ask if they need assistance, if they have questions. If the opportunity is there, we need to take it,” she said. 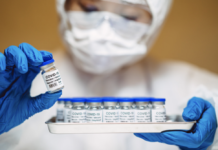 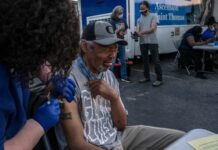