Chauvin was convicted of second-degree unintentional murder, third-degree murder and second-degree manslaughter. His bail was revoked and he was handcuffed and led from the courtroom.

On the state level, the House and Senate Democratic Caucus leaders issued a joint statement, below, and Rep. Antonio Parksinson, D-Memphis, issued a strongly-word statement about the trial and verdict.

“Quit saying justice was served! It wasn’t!,” Parkinson said in his statement. “Yes, we are thankful that the family of George Floyd received guilty verdicts.  But justice was not served.”

Parkinson’s full statement is published below.

Guilty on all counts. #JusticeForGeorgeFloyd is served.

Derek Chauvin had 17 misconduct investigations before he took the life of George Floyd. It’s clear Chauvin’s actions were sickening and irrefutable—he was a bad cop. Today’s decision is justice for the Floyd family.

The jury has spoken. Justice has been served.

A Minneapolis jury affirmed what should be true in all of America: Police brutality is illegal and no one is above the law.

“But George Floyd’s young daughter is still without her father. While this verdict is a new opportunity for healing and a relief for communities that have been rejected by the courts time and time again, we still have to confront the horrific culture of police brutality and ensure that accountability is the standard, not the exception.

#DerekChauvin is guilty but when will we see true justice in the reality of #CriminalJusticeReform for #GeorgeFloyd and so many others.

While guilty verdicts were delivered in the George Floyd case, there are many more unarmed black people in America who have been murdered at the hands of law enforcement and others and have yet to receive or will never receive justice in America.  The very fact that we are even having to hold our breath as we wait for a verdict speaks to the cancer of racism that plagues America even more than that of the pandemic.

Until the life of a black American holds the same value as that of a white American, there is no justice.  America has a human rights issue before it.  How can we judge other countries like China, countries in the Middle East or anywhere else in the world, when we have yet to address the human rights of black people in America?

Today’s historic verdict in the trial of Derek Chauvin brings rare accountability for police. However, one verdict will not ensure transformative justice. Achieving this outcome for George Floyd is only the first step in addressing police abuse of power, disparate treatment, and the use of excessive force against Black and Brown communities dating back to police departments’ inception as slave patrols created to monitor, control, and oppress Black communities.

“If we are ever to end this violence, we must also re-examine approaches to public safety. We must transform policing in Tennessee – ensuring alternatives to armed police officers responding to every situation, increasing accountability and transparency, and creating policies that combat racism in policing. We must remove police from low-level enforcement and reinvest in the communities that too often bear the brunt of police discrimination, harassment and violence.

“We remain committed in our fight to end racist police violence, and to ensure fair treatment, systemic equity and true justice for all Tennesseans.” 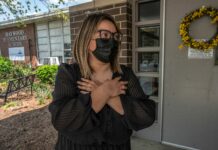 Fear of law enforcement, communication issues hamper use of 911