Hundreds of Tennesseans marched through the streets of downtown Nashville on Friday night to support Palestine and protest treatment of Palestinian civilians in the recent Israel-Palestine conflict.

Many of the approximately 800 attendees were of Palestinian descent.

“We will sacrifice our blood and souls for Palestine,” was a refrain chanted by marchers in Arabic through the event.

The even was the second held by Palestinian activists in Nashville over the last week, with a vigil being held Tuesday night.

After 11 days of fighting, Israel and the Palestinian resistance group Hamas declared a cease fire that went into effect on Friday.

Photojournalist John Partipilo attended the demonstration and captured the scenes. 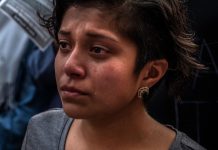