Years in the making, Forrest busting out of State Capitol

Black lawmakers have been fighting for years to relocate Confederate Lt. Gen. Nathan Bedford Forrest’s bust from the State Capitol.

They were in reserved celebratory mood Thursday.

Finally, after a 5-2 vote Thursday by the State Building Commission, including a rare one cast by Gov. Bill Lee, the bust is bound for the State Museum.

State Sen. Brenda Gilmore, a Nashville Democrat, said she met with Lt. Gov. Randy McNally, who voted against the relocation, and he told her he would not challenge the vote. Gilmore said she hopes House Speaker Cameron Sexton will take the same attitude.

McNally spokesman Adam Kleinheider confirmed that McNally will not take additional steps to prevent removal of the busts, even though he felt steps for relocation were taken out of order.

“I’m optimistic it will be moved to the museum. I hope it will be done immediately so that the state of Tennessee can begin the healing process,” Gilmore said.

Lee, joined by Secretary of State Tre Hargett, Treasurer David Lillard and Comptroller Jason Mumpower voted to move out the busts while Lt. Gov. McNally and House Speaker Sexton voted to keep it in its niche near one of the second-floor elevators.

Before the vote, the governor said he hopes the busts will move, but he was unable to give a timeline in advance of the meeting and said he would take the matter one step at a time.

House Minority Leader Karen Camper pointed out Forrest’s family wanted him at Elmwood Cemetery in Memphis, where he was buried for decades, yet the people there opposed it and, ultimately, his coffin was removed earlier this year.

“What this body has decided is they’re going to go with what the people wanted, and I’m grateful that they made that decision to go with the people for what they want with respect to this bust,” said Camper, a Memphis Democrat.

The State Museum did not have an exhibit plan in effect as of late June and was waiting for direction from top state officials.

State Rep. London Lamar applauded Gov. Lee and those who voted to relocate the busts.

“I think it was an act of courage to go against their party on this issue, which tends to be a very controversial issue. Again, this is an opportunity for us to start highlighting individuals in our State Capitol who made a positive impact on Tennessee’s history,” Lamar said.

The Memphis Democrat pointed out Forrest had a “negative history,” one in which he sold slaves in Memphis, was in command at the Fort Pillow Massacre and was the first grand wizard of the Ku Klux Klan. She also noted the state is finally removing Tennessee’s most “notable human trafficker” out of the State Capitol and making room for someone else.

Lamar said the niche should be filled with Ida B. Wells, a Black journalist who exposed the lynching of Black residents in the early 1900s and survived violent threats but ultimately moved out of state to escape harm.

Both Lt. Gov. Randy McNally and Speaker of the House Cameron Sexton voted against removing the Forrest bust from the Capitol. Sexton issued a statement aying only one perfect person has every walked on earth, an apparent allusion to Jesus Christ.

Lee’s view on the Forrest bust evolved since he took office two and a half years ago, beginning with a hands-off approach until he asked the Capitol Commission in 2020 to seek a waiver for relocation.

The Capitol Commission opted to move the bust of the former slave trader and Ku Klux Klan grand wizard but only if busts of U.S. Admirals David Farragut and Albert Gleaves could go with it to the State Museum for creation of a Hall of Heroes exhibit.

McNally released a statement after the vote explaining that he believes context is needed with the Forrest bust but not removal.

“No one is arguing that Forrest is not a problematic figure. He is. But there is more to his story. His life eventually followed a redemptive arc which I hope is outlines in great detail in our state museum,” McNally said in the statement. 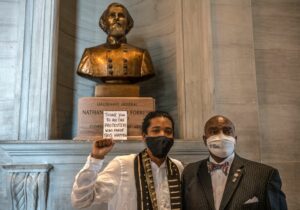 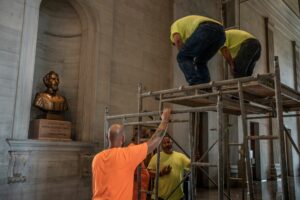 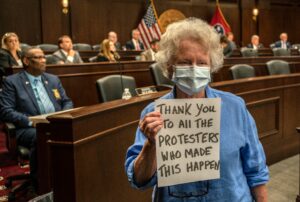 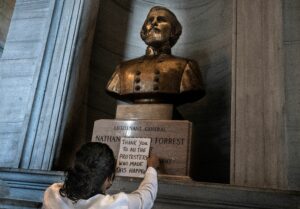 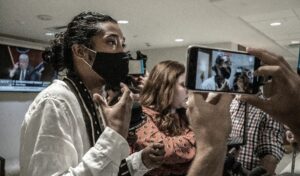 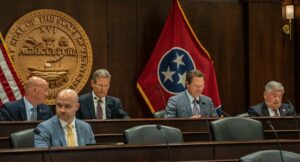 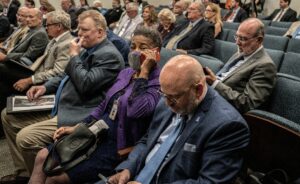 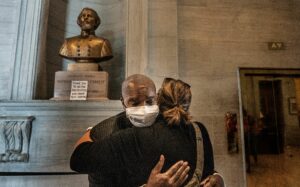 McNally noted that no figure who is honored on the Capitol grounds or statewide could “stand up to modern scrutiny,” and that without historical context, the state would have no heroes or Christian saints, only sinners.

“As Winston Churchill once said, ‘Those who fail to learn from history are condemned to repeat it.’ The left-wing activists who are pushing an anti-American, anti-history agenda here in Tennessee and across the nation will not stop with Nathan Bedford Forrest. The woke mob means ultimately to uproot and discard not just Southern symbols, but American heroes and history as well,” McNally said in the statement.

McNally, an Oak Ridge Republican, predicted the left will try to take down more monuments and “demand that we again kneel at the altar of political correctness.” He added that while the governor and constitutional officers didn’t “stand” with him on this vote, he hopes they will in the future “because more fights are coming.”

Sexton issued a statement saying only one perfect person has every walked on earth and that everyone else has “fallen short.”

“Our country was established by imperfect people who made a great country that stands for hope, opportunity and liberty,” he said. “Trying to judge past generations’ actions based on today’s values and the evolution of societies is not an exercise I am willing to do because I think it is counterproductive,” he said in the statement.

Sexton said he believes the country should learn from its past and pointed out that any attempt to erase “aligns society with the teaching of communism, which believes the present dominates the past.”

The Crossville Republican said the Legislature will revise the process for moving historical monuments to include more elected officials.

Years in the making, Forrest busting out of State Capitol