Forrest carted out of Capitol in straps and chains

Workers carry out the bust of Nathan Bedford Forrest from the Tennessee Capitol. Photo: John Partipillo

Strapped and chained, the bust of Confederate Lt. Gen. Nathan Bedford Forrest was lowered by a boom and unceremoniously rolled out of the second floor of the State Capitol Friday morning, more than 40 years after legislators voted to place him there.

The Rev. Venita Lewis, a 40-year civil rights activist, cheered the removal as workers prepared to roll Forrest’s bust out a door of the Capitol once used by slaves.

“This is a great day in the history of Tennessee,” said Lewis, who participated in sit-ins on the War Memorial Plaza a year ago as protesters called for Forrest’s removal.

Lewis even hoped that workers might accidentally drop the bust and crack it, saying that would be some “breaking news” for media to cover as reporters awaited the removal.

“Nathan Bedford Forrest’s head, bring it out even though we know he’s dead,” Lewis shouted.

Workers started putting up scaffolding Thursday, as state troopers tried to keep media away from the second floor of the Capitol. By Friday morning, they were ready to start removing the busts of Forrest and U.S. Admirals David Farragut and Albert Gleaves to be transported to the Tennessee State Museum. 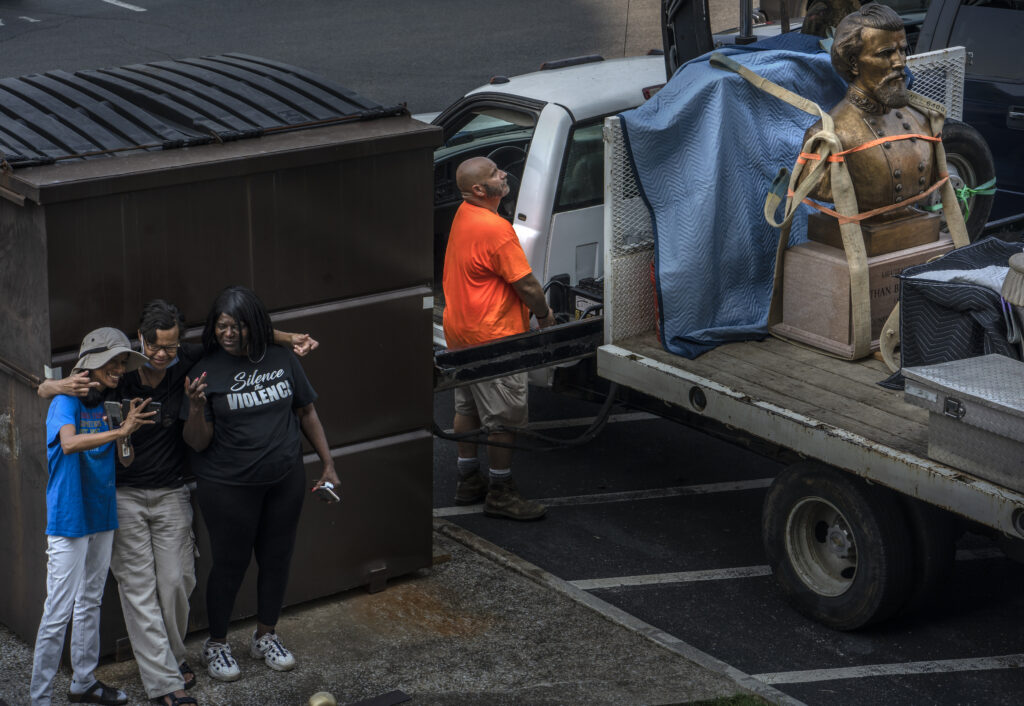 Workers used straps and chains and a pulley system to lift the Forrest bust off its pedestal and lower it to the floor before it was put on the second-floor elevator and lowered to the ground floor.

“The whole state is free today,” Lewis shouted as she sang and celebrated the removal of Forrest.

Gov. Bill Lee led a 5-2 vote of the State Building Commission that was the final step in the busts’ removal from the Capitol.

“After more than a year in the making, this process has finally come to a close,” Lee said in a statement. “I thank the members of the Capitol Commission, Historical Commission and State Building Commission for providing thoughtful input and ensuring confidence in the process. The State Museum provides the full historical context for these figures as we remembers our state’s rich and complex past.”

“Museums preserve historical objects to provide connections to the past and offer public spaces for reflection. We are prepared to place these artifacts in that setting,” Howell said.

Black lawmakers have been working for years remove the Forrest bust, saying it hurts them each time they get off the second-floor elevator.

Forrest was a slave trader before the Civil War, then was responsible for the Fort Pillow Massacre when Black soldiers were killed as they tried to surrender. At the close of the war, he was the first leader of the Ku Klux Klan, though defenders say he sought forgiveness and redemption toward the end of his life.

State Rep. London Lamar said Thursday she believes a bust of civil rights leader and journalist Ida B. Wells should fill the niche that held the Forrest statue.

Forrest carted out of Capitol in straps and chains