Rep. David Byrd, R-Waynesboro, exits the Tennessee House Chambers on a motorized scooter after being sworn in. (Photo: John Partipilo)

Emerging from a fight for his life against COVID-19, state Rep. David Byrd took the oath of office Friday, urging Tennesseans to take the disease seriously and strongly consider getting vaccinated.

Sworn in to represent Hardin, Lewis, Wayne and part of Lawrence counties in House District 71, the former basketball coach and principal entered and left the House chamber in a wheelchair after months in the hospital where he was on a ventilator and close to death.

The Waynesboro Republican was too ill take the oath when the Legislature convened this year and missed the entire session while hospitalized. He said he feels better after getting out of the hospital just three days ago.

“It’s great being able to visit our grandbabies and just kind of get out on your own and not have to worry about laying in bed all day,” a much frailer Byrd said, accompanied by his wife, Sherry, and a handful of House members.

Asked if he believes more people should take COVID-19 seriously, Byrd said. “Well, yeah, I think they do. I just think there’s so much out there that people just don’t know what to believe. But, yeah, it’s serious and people need to take it seriously.”

He was diagnosed with COVID-19 the day before Thanksgiving last year and fell ill, shortly after holding a get-together for House Republican Caucus members in his district. He required a liver transplant after months of illness and was in a wheelchair, still too weak to walk far.

I have never been against taking the COVID-19 vaccine, but I understand the concerns of those who are hesitant. To them, I would say COVID is real and it is very dangerous. . . Please take it seriously. Please consider getting vaccinated.

In a statement released through the House Republican Caucus, Byrd said, “Life is a miraculous gift that I am humbled beyond all odds and explanation to receive a second chance at living. I am the first to admit, I am not deserving of God’s grace in receiving this miracle.”

When he got sick, the COVID-19 vaccine and antibody infusion were not available for his age group and like many people who contract the disease, he had no major underlying health conditions, he said.

“Up until this point in my life, I’ve been pretty healthy and active. Foolishly, I believed this virus only seriously affected people who are at high risk,” he said in the statement.

Byrd related that COVID took over his lungs with “lightning speed” and he developed pneumonia, getting sicker and more anxious, with every breath causing “agony” before he went to the hospital Dec. 5.

Just before being put under by an anesthesiologist, he realized it might be the last moment he would see the world and was terrified, he said.

He quickly needed life-supporting intervention, and for 55 days he was in an intensive care unit and breathing with the help of a ventilator. Byrd noted ventilators save lives but pointed out the majority of intubated COVID-19 patients don’t survive. 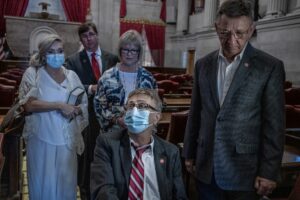 Rep. David Byrd was too ill with COVID-19 to attend any of the 2021 legislative session and was just sworn in July 30. (Photo: John Partipilo) 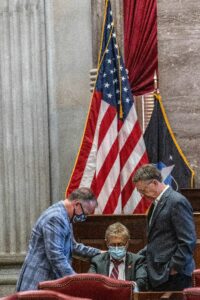 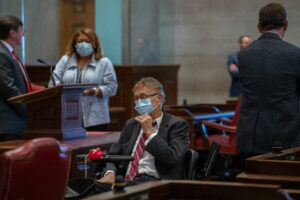 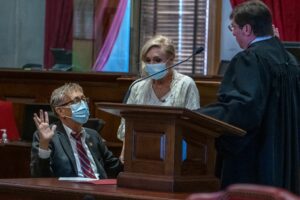 Rep. David Byrd takes the oath of office with his wife, Sherry, by his side. (Photo: John Partipilo) 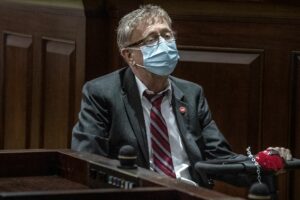 Byrd was released from the hospital after COVID-19 and a liver transplant only three days ago. (Photo: John Partipilo)

Speaker of the House Cameron Sexton, R-Crossville, would not disclose whether he has had the COVID-19 vaccine. (Photo: John Partipilo) 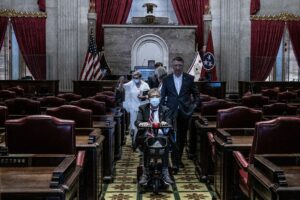 Byrd said he has no memory of that time but noted his family will never forget it, because they were traumatized by daily updates on his status. Everything that could go wrong with the virus affected him and he got sicker despite excellent care.

“My wife and family prayed for a miracle while facing the very real prospect of planning my funeral,” he said in the statement.

He began to recover, and as his lungs got stronger, he was able to breathe on his own. Yet even when he was taken off the ventilator, the recovery was “brutal” and “lonely.” He couldn’t walk or use his arms, and he lost an “alarming” amount of weight.

Then, his liver failed and he developed jaundice and was later diagnosed with COVID Cholangiopathy. He needed a liver transplant or he would die, doctors told him.

He received a new liver on June 12 and though he is gaining strength, he still has a long way to go, he said.

“Gratitude is defined as the feeling of appreciation you get when something wonderful is done for you and you have no reason to expect or deserve it,” he said in the statement. “But there isn’t a word big enough to describe the feeling I have for the incredible gifts I received.”

The veteran legislator said he feels he was “spared by the grace of God” and those “gifted” medical professionals who treated him.

“I hope by sharing my experience it helps others to act against an enemy that knows no skin color, economic status or political affiliation,” Byrd said in the statement.

“I have never been against taking the COVID-19 vaccine, but I understand the concerns of those who are hesitant. To them, I would say COVID is real and it is very dangerous. It is a disease that wants to kill us. Please take it seriously. Please consider getting vaccinated. This is an issue that should not divide us,” he said.

Before suffering the life-threatening illness, Byrd was dogged by allegations that he had inappropriate sexual contact with girls he coached on the Wayne County High School basketball team in the late 1980s. Some lawmakers called for his resignation, but he declined to step down and won re-election last fall.

Rep. Mike Sparks, a Smyrna Republican who attended the swearing-in ceremony, said he had been praying for Byrd’s recovery.

“It just goes to show the seriousness of COVID. He’s probably the worst-case scenario, possibly in the state of Tennessee,” Sparks said. “I’m up here wearing a mask. Many times I’m not wearing a mask, but I am for David and his condition.”

Asked whether some in the House had not taken COVID-19 seriously, Sparks said he tries to balance freedoms and other people’s rights.

His mother is in a nursing home, and he wears his mask when he visits. But she has avoided taking a vaccination, he said, even though the state said it vaccinated all residents in nursing homes statewide.

Speaker of the House Cameron Sexton, R-Crossville, wouldn’t address cases in which lawmakers have questioned vaccinations and refused to say whether he’d been vaccinated, calling it a personal choice.

House Speaker Cameron Sexton welcomed Byrd back to the chamber.

“We were hopeful he would get back on his time schedule, and we’ve had a lot of conversations over the last 12 months about when he was ready we would be able to swear him in,” Sexton said afterward.

Sexton declined to say whether he was ever worried about whether Byrd would be able to return. The speaker also refused to address cases in which lawmakers have questioned vaccinations and said masks don’t work.

“I think the bigger message, you look at the CDC and see the misinformation they put out and how they’ve changed over the last 12 months, how they’ve been all over the map, and it doesn’t seem like they have a message or a method or an understanding of what’s going on either,” Sexton said.

He refused to say whether he’d been vaccinated, calling it a personal choice.