Vaccination rates of Tennessee youth among the lowest in the nation

Esmeralda Baravar, 18, winces as she gets her COVID-19 vaccine during a pop-up clinic at Our Lady of Guadalupe Catholic Church in South Nashville. (Photo: John Partipilo)

In Sullivan County, where COVID cases have tripled in the past two weeks, the local health department’s medical director has started to see a slight but notable shift among the attitudes of parents whose children are old enough to get a vaccine.

Public schools have been back in session for just over a week, and 31 students and 3 staff members have tested positive for the virus, with scores more in quarantine. The county’s school board rejected a mask mandate last week, despite the urging of doctors at Ballad Health, which has held weekly news conferences providing updates on pediatric cases in northeast Tennessee. As of Tuesday, two children were on ventilators in the hospital.

“The rate of vaccination (among adolescents) has been extremely low and very concerning in light of pediatric hospitalizations,”  said Dr. Stephen May, Sullivan County’s health director. “But our vaccine rates are starting to pick up with Delta as we see hospitalizations in children we never saw during the first wave.”

Tennessee has one of the lowest rates of vaccinations among children and youth in the nation, with only Wyoming, Idaho, Mississippi and Alabama ranking lower.

In other words, some Tennessee parents — previously leery of the vaccine for their children — may now be more afraid of the Delta variant than hesitant about the vaccine.

Tennessee has among the lowest rates of vaccinations among children and youth in the nation. Just 29% of adolescents and. youth 12-18 years old have received one dose of vaccine. Nationally, nearly half — 48% — in this age group have received at least one dose of the vaccination. Only Wyoming, Idaho, Mississippi and Alabama have lower vaccination rates among kids. Children 12 and older are eligible to receive vaccines.

In Sullivan County, where state data tracks vaccinations by a different subset of age groups, just 28% of the county’s children 12 to 15 years old have received the vaccine, while 35% of older youth age 16 to 20 have gotten it.

Parents who are hesitant about getting the vaccine for their children often cite reports about extremely rare side effects such a myocarditis – or heart inflammation –  among children, a concern healthcare workers try to address by citing studies that show the vaccine is safe and effective for the vast majority of children, Dr. May said.

“But when you say ‘heart’ everything stops,” he said. “They don’t hear that it’s mild or very, very rare.”

“We hear from parents, even those who are vaccinated themselves, who are concerned about vaccinating their kids,” she said. “Its important to emphasize the safety of the vaccine and how it’s been studied vigorously. It comes down to a trust issue.”

Now that Nashville public schools have reopened, the county’s health department’s strike teams have offered vaccinations at backpack drives, school orientations and open houses, she said. Typically only a few children get them, she said. At the last three child-oriented events Waller attended, only between one and five children got the vaccine.

The biggest problem we are seeing is that parents, legislative leaders and policy leaders are making decisions based on bad information. We're constantly fighting rumors that are untrue.

“I hear a lot that they’re just too young and they (parents) are not knowing or trusting the data,” Waller said. Waller, however, has also seen a shift during this fourth wave of coronavirus in the past couple weeks.

“People are rightfully terrified of the Delta variant and how fast it’s spreading,” she said.

The debate over mandating masks in schools continues this week in Tennessee, with Shelby County and Davidson County schools hinting they will defy the executive order issued by Gov Bill Lee yesterday allowing parents to opt out of masks at any Tennessee public school for any reason.

While masks are critical, vaccines should be the first line of defense against the coronavirus, Dr. Dorothy Sinard, co-chair of a legislative committee with the Tennessee chapter of the American Academy of Pediatrics, or APP.

“The number one thing we want everyone to do is get the vaccine,” Dr. Sinard said.  “The biggest problem we are seeing is that parents, legislative leaders and policy leaders are making decision based on bad information. We’re constantly fighting rumors that are just untrue — that vaccines are causing deaths.”

On Tuesday, the AAP released a statement saying, in part, “we implore all parents to continue to send their  children to school masked. For children who are eligible to be vaccinated, we implore parents to get them  vaccinated as well.” The AAP, which represents 1,000 pediatricians in Tennessee, has requested a meeting with the governor about his executive order.

Sinard was critical of efforts to limit outreach to children by the state Department of Health, which pulled outreach directly to teens about getting a vaccine after pushback from Tennessee’s Republican leaders, who said that parents – not children – should be making those decisions. 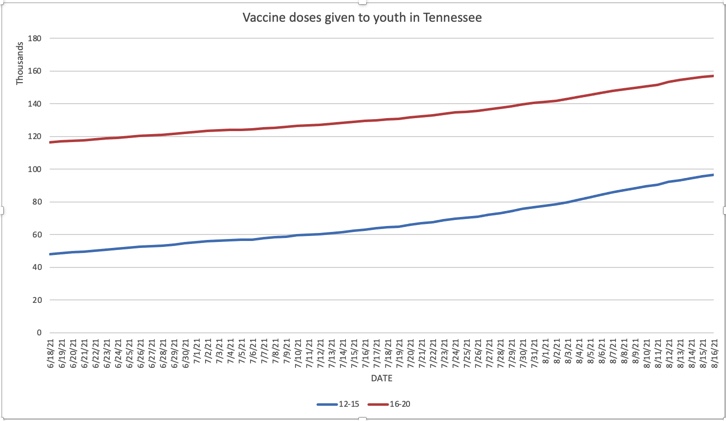 Vaccination rates of Tennessee youth among the lowest in the nation