It’s a decidedly pessimistic forecast for the nation

In one of the more downbeat and depressed projections made in the history of Power Poll, a plurality of members participating in our statewide August survey say the nation overall is “declining.”

Approximately 10 percent went so far as to say the declines were so precipitous that the American success story is over and done with and that these are “End-of-Rome times.”

Meanwhile, in other questions:

• Most members projected that after midterm elections Democrats would go from controlling both chambers of Congress to only one;

• And most members said their places of business are doing better financially than last year at this time.

This email survey was sent to 2,529 Power Poll members in Tennessee. That includes Power Poll membership lists in the state’s four major Metro areas—Knoxville, Memphis, Nashville, and Chattanooga—as well as a statewide Power Poll list drawn from the counties outside the urban areas. A total of 722 Power Poll members responded, for a participation rate of 28.55%.

The Power Poll is not a scientific poll. Rather, it only surveys people who hold power and influence in their communities. As such, it affords a glimpse into the minds of those who truly can make things happen where they live.

Power Poll is active in 24 U.S. cities and growing. It is decidedly non-partisan.

Here is the specific, word-for-word survey and the results. The charts representing each question below have a dropdown menu in which you can select “All Areas” or an individual market. 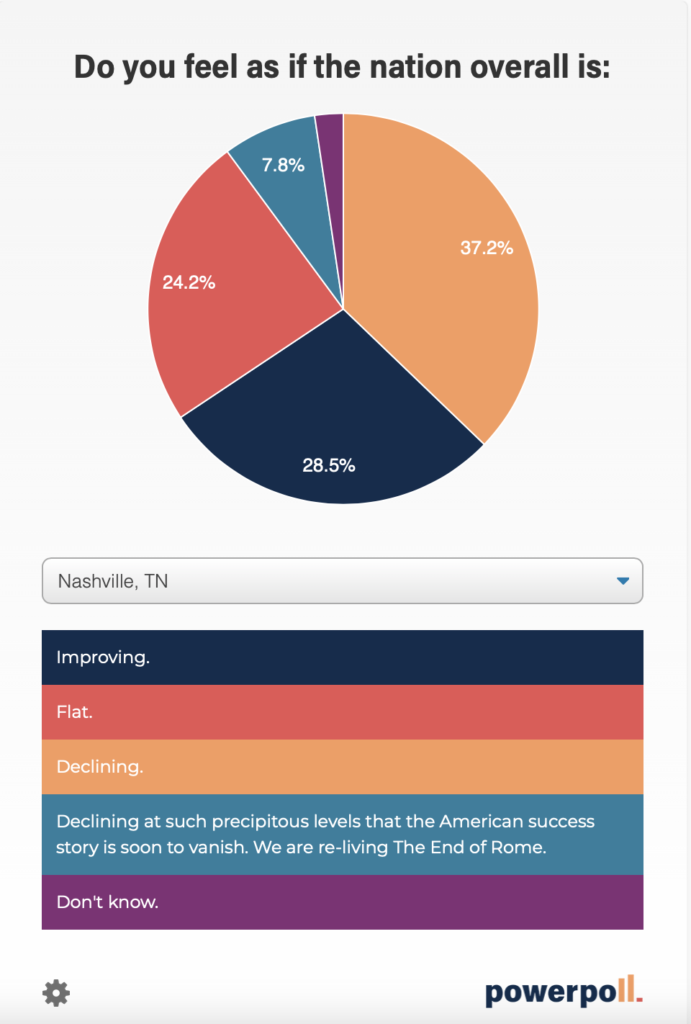 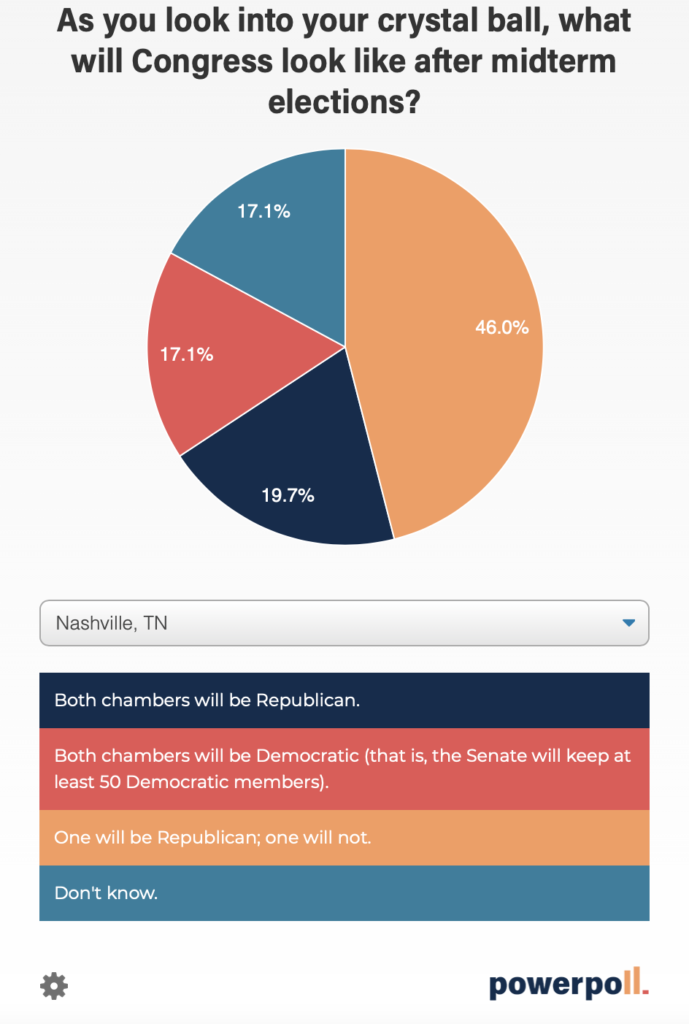 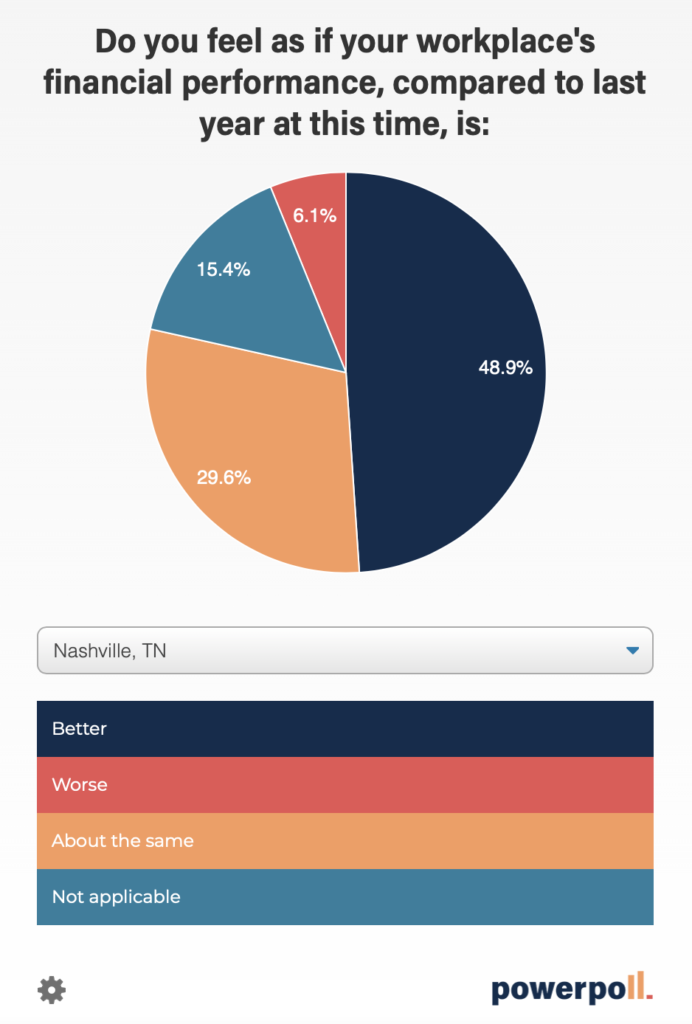 Gloom and doom pervaded the results of this month’s first question. This was a simple variation of one of those standard polling company questions—Are we on the right track? Wrong track? Headed in right direction? Wrong direction?

A couple of data points here:

The results show that roughly half the Tennessee Power Poll members think we are either improving or flat and half think we’re in decline or doomed.

Consider what’s going through our heads:

On the downside: COVID, COVID, and COVID. Afghanistan.

More importantly, here’s the rub and perhaps the cause for depression. Power Pollers clustered in the Chattanooga and Knoxville regions split pretty evenly Democratic and Republican, while Memphis and Nashville are decidedly Democratic. Our list of Tennessee Power Pollers in the more rural counties is decidedly Republican and they were the only group that feels positive about the future, or at least more than the rest of us. Bottom line, it is mostly a Democratic-leaning crowd that is so depressed and worried about the future.

I think that their worries are not placed in the economy at this moment in time or even in the next several quarters. Nor are they really freaking out about anything Congress, the White House, or Washington are doing today. Rather, the average well-educated, affluent, urban voter still bears significant scar tissue from the Trump administration, and the ongoing efforts in many states to restrict voting rights, gerrymander districts, not require masks in schools, take a lackadaisical approach to vaccines… All of this adds to continued angst and a vast gulf in the nation that deeply worries sizable numbers of Power Pollers.

Those seeing doom and gloom in the future deeply worry about the future political potency of those who think the election was stolen. “I didn’t know there were so many American out there who believed this stuff,” is a typical comment from your average educated-affluent-urban Power Poller.

That’s root cause for depression and it’s “End-of-Rome” stuff.

Question #2 is almost worth placing money on. I voted this way. An incredibly high number of Power Pollers feel we’re headed for a divided Congress, with one chamber going Republican after the midterms.

Democrats cling to both houses, with only a 50-seat presence in the Senate. The House is not overwhelmingly Democratic either, and history shows the party in power in the White House loses seats in the midterm elections.

This calculus has almost certainly pressured our president into authoring so much legislation and issuing so many executive orders thus far in his first term. He knows an opposing train is headed his way. Republicans will take comfort in knowing they will be able to stymie significant spending authorizations should they get one chamber. As well, with one chamber they can launch investigations into things like Afghanistan and produce lots of juicy headlines in doing so.

As to Question #3, which essentially asks how we are all doing in our workplaces from a financial perspective, news was good. Compared to this time last year, a plurality (45%) say they’re doing “better.” One-third are “about the same.” A scant few are doing worse.

I have met with four nominal Republicans (two of whom are former officeholders) in the last month and invariably they hasten to tell me that they’re “not like these other Republicans.” They would probably self-describe as being reasonably smart, informed, urban, moderate, fact-based, living in reality, opposed to Trump, and open to negotiation with Democrats. They don’t hate Biden—though his rate of spending deeply concerns them. The point I make is that Democrats will author their demise if they overlook these people who are increasingly without a party. They’re there for the picking. Locally, the kind of people I’m talking about look at our Legislature as an emblem of ignorance, view Sen. Bill Hagerty as unprincipled and a sell-out, see Bill Lee as an empty suit, and elsewhere have nowhere to turn.

Though the mood of most Power Pollers is, as noted, downbeat and depressed, it might lift their spirits to know that the vine is ripe with potential new voters and the potential for realignment—that is, if the message is not so far left as to scare them into hiding.