Stockard on the Stump: Schwinn denies piloting materials in book adoption, but LIFT did

Plus: “Rate your plate” and Briggs strays from GOP talking points

Tennessee Education Commissioner Penny Schwinn told lawmakers this week the state didn’t pilot any materials during the English Language Arts adoption two years ago, nor is it in the upcoming math adoption process.

She made the statement just two weeks after state textbook commission members made it clear the 18-month book and material selection lies with the commission, not with the Department of Education or commissioner. Members also said items were piloted with several school districts two years ago during the English Language Arts adoption.

During a joint meeting Wednesday of House Education committees, Schwinn responded to questions by state Rep. Terri Lynn Weaver, R-Lancaster, who asked specifically if the department is piloting math materials for districts to select. She noted it is against state law for the department to get involved.

“I want to make sure we’re not getting off track and doing something that we have done before, that we don’t do it again when it comes to selecting math adoptions or math curriculum,” Weaver said. 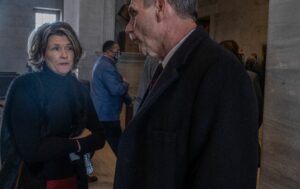 Schwinn answered, saying districts were able to select their own materials for summer learning camps and that legislation passed in 2020 allows the Department of Education to “support” districts.

She said $30 million in federal funds mentioned by Weaver is to go toward implementing standards and noted it is “agnostic” to instructional materials. (Whatever that means.)

“But the department is not running any pilots related to math instructional materials, and the department didn’t run any pilots for (English language arts). I know there were pilots that existed, but those did not run through the Department of Education,” Schwinn said.

In other words, vendors were sending materials to school districts in an attempt to persuade them to seek approval. Schwinn only granted waivers for materials that didn’t make the cut with the textbook commission.

Schwinn reiterated those comments later to the Tennessee Lookout, saying, “We haven’t piloted, and I want to be very clear about that. We did not pilot in ELA, and we are not piloting in math. The pilot that’s talked about in ELA is a separate group that has nothing to do with the Department of Education. We do not pilot materials in advance. We are very, very tight about that.”

In light of those comments, the state Legislature must have wasted time passing legislation that removed the education commissioner from the textbook commission, giving her only ex-officio status, and allowing the department to provide support only during textbook and material adoptions.

Schwinn, though, was referring to LIFT, a network of school districts created by the education consortium SCORE and TNTP Inc., that piloted materials during the ELA adoption. (TNTP Inc. holds a sole-source $8 million contract with the Department of Education even though Schwinn’s husband works for the company. She got approval from the Office of Central Procurement and promised that he wouldn’t be involved in Tennessee work.)

The department filed a literacy bill in 2020 at the same time a pilot program was going around. Lawmakers heard about the plan and quashed it, passing legislation to keep the commissioner out of the process.

But Schwinn ultimately won out when the Legislature approved a literacy program, Reading 360, in the 2021 special session to deal with learning loss. That measure gives school districts incentives to use piloted products with state funds. But if they use a product outside the state’s list, they don’t get the money.

Thus, their recent comments that vendors and school districts need to stay out of the way during the math selection process. Combs was pretty adamant when he said items were piloted during the English language arts adoption period and noted that he wants to make sure the commission adheres to the law.

Cash also wanted clarification about a request for proposals the Department of Education is taking to hire a vendor who would be responsible for helping districts prepare for the math book and materials adoption. People who know about this process say a vendor is unnecessary and could put undue influence on school districts.

Schwinn has defended herself, saying she doesn’t get involved in requests for proposals, once they are made, putting the responsibility on the state’s Central Procurement Office to handle bids.

But asked Thursday about Schwinn’s comments to the House Education committees, Combs said, “I believe our expectation, as a commission, is that the appropriate policies are followed during the adoption process. That was and will continue to be my point. Nothing should get to districts for adoption that hasn’t gone through the appropriate steps.”

Commissioner Schwinn escaped questions this week about the validity of tests school districts gave to 120,000 students this summer before and after they attended summer camps designed to bring them up to snuff after more than a year of upheaval caused by the COVID-19 pandemic.

Schwinn acknowledged the tests weren’t quite the same as TNReady but failed to mention during a Wednesday hearing that they asked only 10 questions and took roughly 30 minutes, roughly the equivalent of a pop quiz compared to a final exam.

Yet that’s how Schwinn and Gov. Bill Lee sold improvements reaped by the Legislature’s $160 million expenditure for summer learning programs, which turned out to be a series of fun events with some education mixed in to keep kids on their toes.

While touting the success of tests taken by 120,000 students during the summer, Schwinn failed to note the tests consisted of only 10 questions and too about 30 minutes to complete.

No doubt, it’s better than sitting at home and vegetating. But the state didn’t advertise how well they performed on the tests, just that they saw improvements from the start to end of the summer.

Not much talk was made, either, about the rest of the 1 million students who opted not to attend the summer camps. For all we know, they could have been out running the streets – or playing ball – which is what I would have done in elementary and middle school.

Speaking of running the streets, Tennessee’s absenteeism rate is roughly 13% and its truancy rate between 5-10%, according to a state study. That means a whole lot of parents aren’t making sure their kids are going to school.

Yet Gov. Lee keeps telling us parents should be the final decision-makers for children when it comes to COVID-19.

You might remember the Department of Health fired its immunizations director, Dr. Shelley Fiscus, because she sent a memo to “vaccine partners” such as drugstores summarizing the state’s “mature minor” doctrine, which in rare instances allows children to make their own healthcare decisions. She was also held responsible for the state’s vaccine messaging to children, even though it ran through Gov. Lee’s office.

Anyway, the governor has said repeatedly parents should be the final arbiters on vaccines and masks, after consulting their physicians. Of course, Fiscus and Health Commissioner Lisa Piercey are pediatricians, but who’s listening to them? Apparently, only about a half the population.

If parents are the ultimate decision-makers, though, can they be trusted to make the right call for their children’s health if they can’t even make sure they go to class?

Sen. Richard Briggs caught the state’s attention this week when the New York Times published an article saying Gov. Lee’s pandemic decisions are based on politics.

Briggs, a physician and Knoxville Republican, was quoted as saying Lee is trying to walk a “tightrope” between medical expertise and his conservative constituents, meaning key decisions are being left up to votes from the far right.

Apparently, Briggs isn’t worried about a primary opponent in the next election. He’s probably safe.

Considering a big chunk of Tennessee’s populace still believes the pandemic is a hoax, this isn’t surprising, even if people such as talk show host Phil Valentine, an anti-vaxxer before he died, are dropping like flies.

Meanwhile, Tennessee is narrowing its supply of monoclonal antibodies to people too hard-headed to get a vaccine. The policy might be based on President Joe Biden’s decision to limit the supply of monoclonal antibodies in seven states, including Tennessee, where cases have been the worst. The president doesn’t believe a handful of states should monopolize the COVID-19 cure.

But two wrongs don’t make a right, and eliminating vaccinated people from the option of the antibodies seems sort of like rationing healthcare. I think I’ve heard people preach against that.

Why does Sumner County have 675 workers who are refusing to take the vaccine?  And why did the Legislature pass a law prohibiting state and local government from requiring employees to get shots? People who serve the public should be the first ones to take the vaccine.

Money for nothing, shots for free!

This just in from the Hendersonville Standard: Government employees in Sumner County could be rewarded with $500 to get vaccinated.

Call me crazy, but this sounds like a pay-off for the stubborn.

The incentive is expected to cost nearly $400,000 for nearly 675 employees and will be used with a portion of American Rescue Plan funds.

A lot of folks want to complain about the poor being bailed out by the government. Well, we’ve had a lot of rich folks taking federal and state government bailouts in the last 18 months. So one is no worse than the other.

I guess we might as well bail out these knuckleheads too, and I’ll be looking for my $500 property tax break later this year.

Lee went to Twitter to encourage people to cast a vote for their favorite Tri-Star license plate design at tn.gov/ratetheplates through Sept. 27.

It set off a Twitter firestorm over the loss of the Tennessee that brought us Sax Cat and Better Keep an Eye on Your Drink Fish.

Those were among numerous Tennessee specialty license tags, including those for Alabama football fans and Sons of the Confederate Veterans, which some might say are one and the same thing.

Maybe we should be able to vote to eliminate Alabama football and SCV plates, which benefit the group responsible for trying to keep Confederate Lt. Gen. Nathan Bedford Forrest alive in Tennessee. As for Alabama football fans, well, let’s just say it’s easy to ride the band wagon.

But here’s what we really should be doing. Even though tags have county designations on them, let’s go back to the days when the first number on the license tag was based on the county’s population. Years ago, Shelby was 1 and Davidson was 2 and so on.

OK, maybe that’s a bit harsh. But as Bruce Cockburn is said to have said, it was a “cry” for help, not a call for violence in the plight of Guatemalan refugees in Mexico.

Stockard on the Stump: Schwinn denies piloting materials in book adoption, but LIFT did

In Tennessee's first partisan school board elections,… by Dulce Torres Guzman July 18, 2022
Biden’s State of the Union address by States Newsroom March 1, 2022
Stockard on the Stump: Book challenges becoming the rage in… by Sam Stockard October 14, 2022