“A story of great misery for many, and great profit for others”

The mostly-forgotten history of Tennessee’s convict leasing, which used prison labor to mine coal in the mountains during the 1800s, is being brought to light by a team of professors and genealogists across the state.

Dr. Camille Westmont, a postdoctoral fellow in historical archaeology at Sewanee, is searching for answers to the Lone Rock Stockade’s dark past in Grundy County.

Westmont started the project a couple of years ago after a volunteer at the local museum told her coal in Tracy City had been mined by prisoners.

Today, ovens where the coal was processed, called coke ovens, are still visible from the roadside while driving through the mountains. It was in these mines and coke ovens that African American men were often forced to work after being imprisoned on racially-based charges like interracial marriage.

After the Civil War, prisons began to lease prison labor to private companies, Westmont said. These targeted laws called “Black codes,” were designed to keep Black men in jail so they could provide free labor to companies. Conditions in these prisons were often horrific and included violence, starvation, cramped quarters and disease.

On the western edge of the Cumberland Plateau in the southeastern part of Middle Tennessee, one mining company replaced a former Union Army stockade called the Lone Rock Stockade, which had been built when the Union Army took over the local coal mine. The inadequacies of the military stockade as a prison are likely what led to the construction of the Lone Rock Stockade around 1872—to have a purpose-built prison located right next to the new Lone Rock Mine. 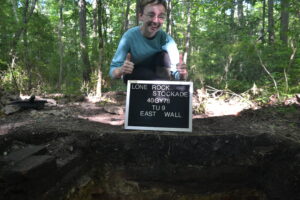 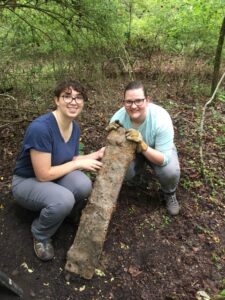 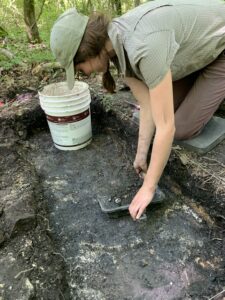 “Through the selective application of the law and increased penalty, they were able to trap African American men into these cycles of incarceration,” Westmont says. ‘They could sell [them] as part of the convict lease system.”

Not every Tennessean was a fan of the practice, even during the 1800s. According to a November 16, 1891 article in The Sun, the Tennessee Coal, Iron and Railway Company owned the mines where the prisoners worked, and other mines nearby employed free men who worked for wages. These miners were angry at the prisoners’ treatment and took up arms against the company, which leased as many as 1,500 convicts per year. The article says the Lone Rock Mine had been worked by convicts since 1871, and Westmont says it was burned down by locals on August 13, 1892.

“A great white sepulchre on the mountainside where shame and brutality stifle all manhood,” The Sun’s headline reads. The story includes bloody descriptions of beatings and death.

Westmont is currently searching for signs of a cemetery outside the stockade, where it’s estimated as many as 800 prisoners died and were buried. Westmont has original prison records with the names of the men who died, and says she has spoken with locals who have seen bones and grave markings in the ground.

It’s unclear exactly where the cemetery is and who is still in it, or if there are any gravestones left. Westmont has been using a combination of technologies to try and find the location, including lidar, which stands for light detection and ranging. According to the National Ocean Service, lidar is “a remote sensing method that uses light in the form of a pulsed laser to measure ranges to the Earth.” Westmont will wait until the leaves fall off the trees to try and use lidar to locate any potential grave sites or a cemetery, she said.

In the meantime, with no physical location, she’s partnering with Taneya Koonce, Tennessee chapter president of the Afro-American Historical and Genealogical Society in Nashville. Koonce is working to search through family trees to connect potential surviving family members and descendants of the men who died in the stockade.

Koonce first learned of Westmont a year ago when they were introduced through a mutual colleague, and says raising awareness is a priority on this project because so many people don’t know the history of convict leasing or its impact. She says that during one meeting with Westmont and volunteers at the genealogical society, there was a heavy moment when it became clear these men needed to be remembered properly.

‘They’re not just names on a page,” Koonce says. “We would know their families, who their future generations were. One of our participants said, ‘Can we just stop and read the names?’ So we just read the names. It’s just acknowledging them, putting a stamp on their history at a time they were discarded.”

Koonce and Westmont are also joined by Dr. Christopher McDonough, Alderson-Tillinghast chair in the humanities at Sewanee, who is filming a documentary about the mines and convict leasing. He says that as we recover this history it shouldn’t be forgotten again. McDonough made an award-winning documentary called “Mine 21” about a mining disaster in East Tennessee. McDonough says he is seeking more funding and may expand the documentary into a miniseries because the story is so important.

‘We live in the shadow of such stories, and we are not at liberty to ignore them,” McDonough says. “Lone Rock is a story of great misery for many, and great profit for others. We need to think about what we will do with that knowledge.”

Koonce agrees. Although finding the cemetery won’t change the genealogical society’s goals, she’s hopeful it will give more context to African American history in the United States. Most importantly, she wants to continue working with Westmont on a project that may take many years because of just how many men were imprisoned and enslaved at the stockade. She says we can learn lessons from the past and hopes to unify the Black community through archeological and genealogical work.

“I hope it just continues to contribute to the national consciousness of what has happened to African Americans in this country,” Koonce says. “It’s a conversation that can never stop being held. There’s so many injustices and this is another layer of it.”