A child peeks through porch slats at a mobile home park along Dickerson Pike, where tenants are fighting eviction. Photo: John Partipilo

Juana Cecilia has lived on Dickerson Pike for 17 years but faces losing her home after developers took an interest in her trailer park neighborhood.

In June, she and 19 other families received eviction notices giving them less than two months to find a new home.  They later learned that their neighborhood was being sold to New Orleans developers, and their mobile homes were to be bulldozed to make way for high-scale residential units and commercial space.

Despite a world-wide pandemic, Nashville’s increasing development has continued to push out residents.

“On its face it seems quite weird, huge companies are funding rapid gentrification to squeeze the last few dollars out of the workforce of this town. How does that benefit anyone but the people doing the squeezing, who usually don’t even live here?” asked Jack Marr, a member of the renters-rights organization Red Door Collective.

Dickerson Pike was no exception to gentrification. Located in District 5, the area has seen increasing development in recent years due to its location in central Nashville. Of the several trailer parks gathered along the busy road, numerous tenants had already been evicted.

Dickerson Pike’s  W.C. Company Mobile Home Community’s sale was still pending, but when the letters arrived, some tenants were quickly able to take their trailers elsewhere, leaving behind layers of broken bricks and concrete. Others who could not move their homes faced losing them.

“My daughter is always asking where we will go, and I respond that I don’t know,” said Cecilia. “This is injustice.”

Instead of cutting their losses, the tenants organized and contacted Workers Dignity, a labor-justice organization, for help in reaching a compromise with developers. Metro Nashville Council members also became involved, and on Oct. 5, they ruled in favor of the tenants by delaying a decision on authorization needed to start development.

“This is what we were hoping for,” said Cecilia Prado, Worker’s Dignity director.

The Metropolitan Government of Nashville & Davidson County will return for a vote on the zoning ordinance for Dickerson Pike W.C. Company Mobile Home Community on Nov. 2. 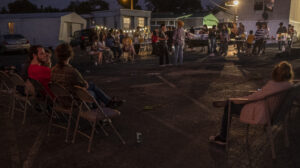 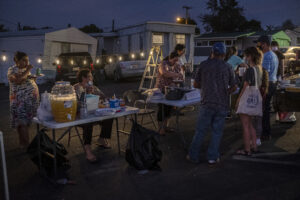 To raise funds for those facing eviction, the mainly-immigrant tenants cooked authentic meals for sale. 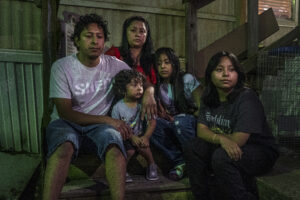 Juana Cecilia and her family contemplate facing eviction on the porch of their mobile home, where they have lived for more than a decade. 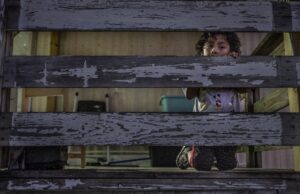 Logan, a 1-year-old, kneels on the porch of his mobile home. (Photo: John Partipilo) 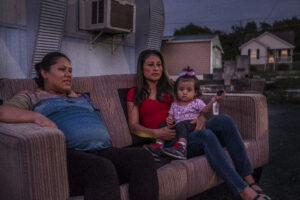 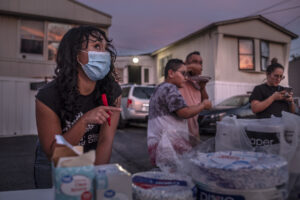 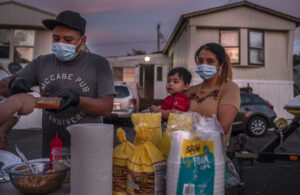 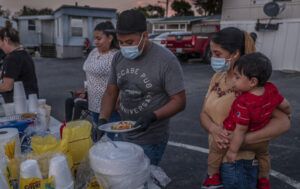 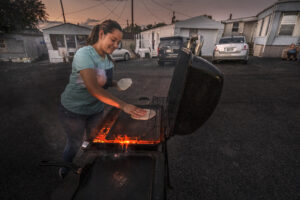 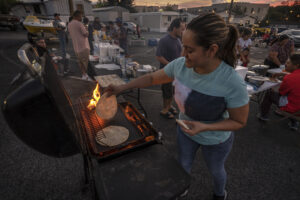 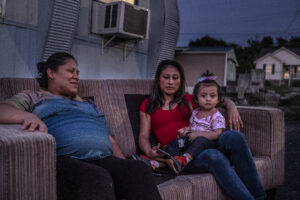 While tenants had initially been given a few months to find a new home, they now have until the end of the year to reach a compromise. Their eviction would cost developers, they said, and asked for $20,000 to $45,000 for each family forced to leave their trailer behind. In total, tenants are asking the developers to pay at most $500,000–the cost of a two-bedroom condo near their neighborhood.

“Key Real Estate’s development is projected to have 700 residential units and 20,000 square feet of commercial space, which has the potential to bring them hundreds of millions of dollars in profit,” said Prado in a press release.

The Dickerson Pike tenants are not the only ones in this situation.

In May, tenants living at Mosaic Apartments in Southeast Nashville similarly received eviction notices despite active lease agreements. The mostly-immigrant tenants were told conflicting reasons for their evictions– from sewage problems to storm damage– but suspected that apartment managers were trying to force them out and make way for high-end housing. They were given three days to leave before the police were called, and many of the mainly-immigrant tenants began leaving in droves out of fear. The remaining residents organized and received help from Worker’s Dignity, which negotiated on their behalf.

In June, a public meeting was organized between the tenants and property owner Village Green Management, a California-based company. Local council members attended as well and organized as tenants recounted their struggles in facing eviction in the middle of a pandemic.

One tenant said she was told by the property managers that she would be allowed to return to her apartment, but tenants from Guatemala could not. Others complained of the financial difficulties they experienced in the weeks following the initial eviction notices and asked for compensation.

Workers Dignity members presented a list of 22 demands, including a playground for families, and asked for the current manager to be fired. By the end of the meeting, negotiations had broken down after Village Green management was accused of lying about the apartments being in unlivable conditions to get around the federal eviction moratorium. Rob Bond, the owner, quickly left the building, but city officials stayed behind to assure tenants they were no longer facing eviction.

Workers Dignity continues to work with both residential areas. Although the Mosaic Apartment residents still face problems, said Prado, the situation at Dickerson Pike is different. There, the mainly-immigrant tenants owned their own trailer homes but paid rent to park them. If they could not move, the homes would be destroyed.

For now, W.C. Company Mobile Home Community tenants have more time to consider their options, but Cecilia has no idea where she’ll go if she’s forced to move. She had already searched for other homes to rent, but has received no response. Her job prospects as a housemaid continue to dry up, and with no Social Security Number or good credit, she worries for her family.

“If I move from here, it’ll affect me significantly,” said Cecilia.

District 5 representative Sean Parker said he’s still working with developers to reach a compromise. Ethical development should always take into consideration the people already living in the area, he said.

“I’m pushing for as much affordable housing in my district as possible and I think we need to be doing that county-wide,” he added.

As for Cecilia, she hopes to find a way to stay in the area for her children. Her older daughter is expecting a quineañera, a Hispanic tradition commemorating a girl’s journey into adulthood. Her youngest daughter was accepted into a KIPP Academy, a high-performing charter school, and excels in her math courses.