A historical marker for the Elliston Place “Rock Block” is positioned just outside the Exit/In. (Photo: John Partipilo)

At Exit/In, many things are the same as they ever were. The club is hosting shows again. The owner is the same — Chris Cobb. The rent costs the same, but now it gets mailed to Chicago, because one big difference is that Exit/In now has a new landlord, AJ Capital Partners.

Though the Elliston Place property on which the venue sits is currently not for sale and the Cobb family’s initial bid, heavily backed by the Live Music Recovery Fund with Grubb Properties, failed, Cobb remains determined to buy the property.

“I would love nothing more than for AJ Capital Partners to decide that they no longer want that parcel on Ellison and to sell it to me,” he says.

Music venues tout themselves as some of the hardest hit operations of the pandemic, and with that, a number of relief opportunities emerged.

At some point, I'll know that this is over. I don't know exactly when that will be. At that point when it's 100% clear that there's no path forward, then that's when those funds would be donated to the two organizations.

2020 saw the founding of Music Venue Alliance-Nashville, of which Cobb is president, and the Nashville Independent Venue Association. Both organizations have distributed funds to independent venues. More recently, Metro Nashville distributed CARES Act Grant funds to venues, and Exit/In got $50,000 of it. Federally, the U.S. Small Business Administration gave out $11 billion in grants through its Shuttered Venues Operators Grants — $374,000 went to Cobb’s booking company Bonafide Live, which books Exit/In.

“What prompted [the gofundme] was the outpouring of people reaching out and saying ‘hey we want to help, with this how can we?’ and, you know, me not having a really good answer, and ultimately saying, ‘all right, people want to give let’s give let’s let them.’” Cobb says. 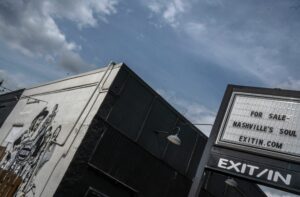 As Nashville's oldest rock and roll club, the Exit/In is perceived by many Tennesseans to be an intrinsic part of what makes Nashville "Music City." (Photo: John Partipilo) 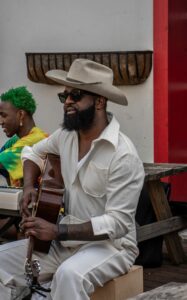 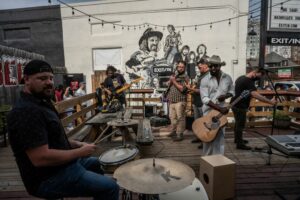 As has been done thousands of times since the Exit/In opened in 1971, a live band cut loose for the crowd. (Photo: John Partipilo) 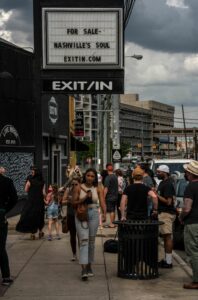 Nashville's Elliston Place, busy on a recent afternoon as Exit/In supporters arrived for a rally to save the property. (Photo: John Partipilo) 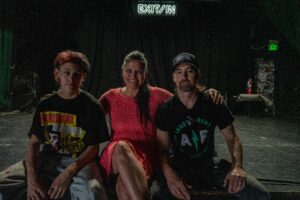 Exit/In owners Telisha and Chris Cobb with their son, Spike, sit on stage at the Exit/In. (Photo: John Partipilo)

The Gofundme created in April says “should our bid fail, all money raised will be donated to NIVA and MVAN.” Cobb clarified to Tennessee Lookout that he plans to keep the money from that gofundme in a separate account and keep donations open until Exit/In’s lease is up at the end of 2022.

“At some point, I’ll know that this is over. I don’t know exactly when that will be. I hope never. At that point when it’s 100 percent clear that there’s no path forward, then that’s when those funds would be donated to the two organizations,” Cobb says.

When AJ Capital announced its plans to preserve Exit/In, it offered to refund the donations to those who gave to the gofundme. AJ Capital did not respond to requests for comment for this story.

The fear for a place like Exit/In is that the same thing will happen as what happened to the Mercy Lounge complex — which recently announced it was moving to a yet-to-be determined location after 20 years on Cannery Row. Its lease had come to an end, but according to a Tennessean article, Cannery owner Zach Liff, says he’ll continue investing in the property and that the plan is for the music venues to re-open.

The Mercy Lounge complex news may come as a surprise to some, because compared to Exit/In, there were fewer community rallying cries to save it. But, the complex got larger chunks of money to support its three adjoining venues. CARES Act brought 74k and the Shuttered Venues Operations Grant gave an initial amount of 2.1 million and a supplemental amount of 1 million later on.

That fear is intensified for Cobb because he hasn’t been in communication with the new landlords— no conversations beyond those about rent, he says.

The money from the gofundme specifically was meant to sweeten the deal on top of the 6.5 million bid to buy the property, backed by Grubb Properties. Grubb appears to be a safer option for landlords for Cobb — especially backed by the head of NIVA. Their goal is to get $25 million into their Live Venue Recovery Fund. The catch is, that fund can only be used to buy independent venues outright. But with that, they will create a plan to put venues in a position to buy the venue back from them within three to five years. Unlike AJ Capital real estate firm, Grubb is also an investment firm, and relies on backers for this Live Venue Recovery Fund that are looking for a return on investment.

“So as they invest in the Fund, they’re expecting some return on that investment. But most of the time when that happens, when you invest in a fund, then you start to get returns back and the returns can be as high as the performance allows, but this one we’re saying, you’re only going to get a certain percentage back, and if we do better than that percentage, then we donate the excess proceeds,” Emily Ethridge, communications director with Grubb Properties.

The excess proceeds will go to NIVA. So far, Grubbs has only acquired Headliners in Louisville, Kentucky. And they’re bidding on various independent venues across the country.

Grubb says if the Exit/In property is up for sale again, they would be willing to make another offer — that is, if the money in the fund hasn’t already been spent on acquiring other venues.

What Exit/In does have is some time before its lease is up when the clock strikes midnight on December 31, 2022.

“Things change and a year and a half isn’t a ton of time but it’s also a long time so I mean, I don’t know, anything could happen, I think, who knows.” Cobb says.

While the new landlords have only shared their guarantee of Exit/In’s preservation, if for some reason they choose not to renew Exit/In’s lease, the venue would find itself in the same position as their peers Mercy Lounge, High Watt and Cannery Ballroom. But for now, the building isn’t up for grabs and grants, relief funds, benefit concerts or gofundmes can change that.

Hannah Herner is a freelance writer for Tennessee Lookout. She covers issues around poverty and homelessness as a staff writer at The Contributor street paper, and also freelances on various topics for Nashville Scene. She is a proud alumna of Ohio State University and Americorps. A small town transplant, Hannah loves taking in all of the festivals, concerts and restaurants the city has to offer.

Biden’s State of the Union address by States Newsroom March 1, 2022
$200M TNInvestco program winds down, serving as a cautionary… by Jamie McGee January 4, 2022
As federal protections have ended, Memphis evictions have… by Dulce Torres Guzman September 28, 2021